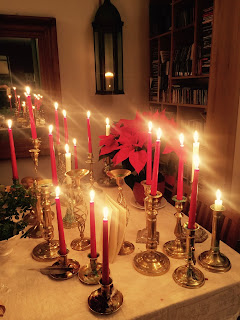 We are in the South of France at our Olive Farm. The weather is warm, the sun is shining and we are able to work outside on the land until late afternoon.

There is no snow. Snow is a very rare event here. I think I have seen flurries of it twice in over thirty years. When it settles though it is quite beautiful and is usually accompanied by the sun shining across the Mediterranean in the distance. 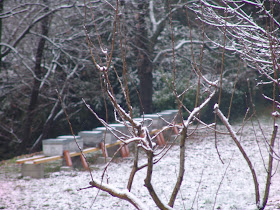 A rare sight here, a light coating of snow over our beehives

Do I crave those colder, snowier Christmases I enjoyed as a child? Not at all. I have embraced the differences of this lifestyle and enjoy them.

Here, we eat our principal Christmas meal - le grand repas, or gros souper - on the evening of the 24th December. It will frequently include oysters, cheap as chips here, though this year we have not put them on our menu. The local poissonneries (fish shops) tend to erect a marquee outside their main shop. Here the oysters are chosen and prepared and laid out on round trays to take home and put directly on the table.
Lunch on the beach on Christmas Day is also a tradition. Plenty of oysters being served there.

Almost every family home will include its own crib and in the crib are to sure to be at least four or five santons. There are dozens to choose from. 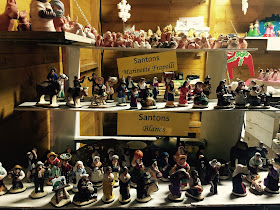 I took this photograph of the santons on display in one of the wooden chalets at the local marché de Noel in our village this week.
By the way, the oldest marché de Noel in France is to be found in Strasbourg. Its Christkindelsmarik dates back to 1570 and is really worth a visit.

Back to Provence. Here is an extract from an article I wrote for France magazine about santons and their history:
"From mid-November right up to Christmas, you can find santon fairs known here as Les Foires aux Santons, all across the Provence-Alpes-Côte d'Azur region. A santon is a Provençal crib figure modelled from baked clay. Santon comes from the Provençal word santoun, meaning 'little saint'.
Buy them completed or still to be painted. Chat to one of the santonniers, the artists of the figurines, who will happily give you the history of these local treasures. At the time of the French Revolution, when the churches were closed by the anticlerical revolutionary authorities, nativity scenes were banned. In response, the Provençaux began to make their own cribs – sometimes exhibiting them in their homes for a few centimes. At first, they were formed out of papier mâché, cloth, bread or any material the maker could lay his hands on and could be used for modelling. It was both an act of faith and of revolution, and, if caught, the guillotine could be the reprisal.
"The crib figures include, of course, the main players: baby Jesus, Mary and Joseph, but you might also find a shepherdess or glass-blower, a fisherman, knife-grinder, miller, laundry girls, vendors of herbs or fruits, musicians, donkeys, goats, sheep, the local curé, even the schoolmistress. It forms a miniature re-enactment of 19th-century Provençal country life.

"In 1797, in Marseille, an artisan by the name of Jean-Louis Lagnel (1764-1822) had the idea of creating the figures in clay and painting them. It was in Aubagne at the start of the 20th century that the clay was fired to make the figures more resistant.
Santonniers are usually born into a family business passed down from generation to generation. What is remarkable is that even 21st-century artisans will spend hours in the hills hunting for thyme twigs, a stone or some precise detail they need to give their characters authenticity. Aubagne, birthplace of the great storyteller and film-maker, Marcel Pagnol, boasts an excellent santon museum."

Another tradition, one we don't adhere to, is the serving of thirteen desserts on Christmas Eve to finish off the Grand Repas or Gros Souper. These thirteen known in Occitan as lei tretze dessèrts represent Jesus and his twelve Apostles. If you are going to be true to the tradition the table needs to be set with three candles and three tablecloths for the Trinity. The choices which vary according to family tastes and traditions are then left on the table until the 27th December.

Here is what is served:
dried fruit and nuts: raisins, walnuts, dried figs and almonds (all locally grown fruits). This quartet is known as the four beggars representing the four mendicant monastic orders: Dominicans, Franciscans, Augustinians and Carmelites. The choice of dried fruits might also include dates (to celebrate the land where Christ was born) or dried plums from Brignoles. (I don't know the significance of the dried plums except that they are a local variety.)
Also on offer would be fresh fruits all grown in the region: apples, oranges, winter melon, grapes and tangerines amongst them.
Then, amongst the other dessert plates, you will find Calissons, originally from Aix, which is a marzipan sweet olive oil fougasse, two kinds of nougat, quince paste, cumin and fennel biscuits, candied citrons, biscotins ... well, you see why we don't serve all these.
French toast with apples and dried fruit might be an alternative or a melon and lavender tarte. Oreilletes, these are a feather-light waffle.
Some of the above you might eat for breakfast on Christmas morning.
Tradition also insists that every guest must try a little of each.
All of these foods are, of course, a splendid and very practical way of preserving your harvests and to celebrate the local cuisine.
I am begging to feel  full just writing about it all!

And after all this food, the family would walk to the local church for Midnight Mass, a tradition I have grown up with in Ireland and the UK.  In some districts the mass might be partially celebrated in Provençal. I have certainly attended mass in the Camargue where it was sung and spoken entirely in Carmarguais-Provençal.

Chestnuts are grown aplenty in Provence and further west so it is very easy to find chestnuts for your turkey stuffing. 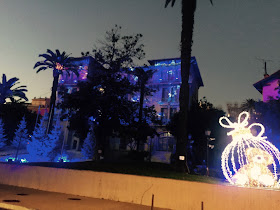 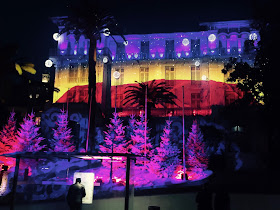 Here are some photos I took two days before Christmas of our local town hall. They were snapped taken on my phone during its light show. This display lights up the facade of the Mairie each evening during this season so adults and children can congregate to admire and photograph it. A small chalet alongside the town hall serves coffees and hot chocolates and gateaux. 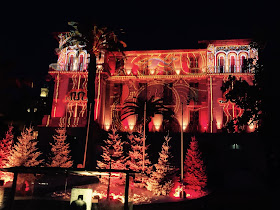 I wish you a very splendid Christmas time, wherever you are, whatever your faith. Most of all, in these very troubled times, I pray for Peace on Earth and understanding.
The next time I write it will be 2018 in our calendar, so Happy New Year to all my wonderful Sister HGs and to all you readers. Thank you for popping by here.
I hope for all of us it will be a sane and blessed year.