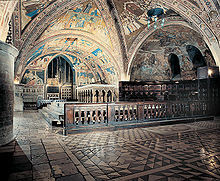 Of course there had been paintings of the Nativity for centuries and Christmas plays, imitating those of Easter, probably grew up in the 11th century. In the century before Francis lived, ecclesiastics dressed up as the midwives, Magi, shepherds and other people in the Christmas story, as well as live animals. This is recorded in descriptions of the liturgical drama, the Spectacula Theatricalia.

But it was Francis who, in about 1223, had the imaginative idea of re-enacting the birth of Christ very simply. He had recently visited the Holy Land, where he saw Jesus's traditional birthplace in Bethlehem. Later he told a friend: “I want to do something that will recall the memory of that Child who was born in Bethlehem, to see with bodily eyes the inconveniences of his infancy, how he lay in the manger, and how the ox and ass stood by.” These animals are not mentioned in the canonical gospels but frequently appear in the apocrypha. 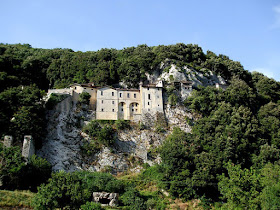 A friend of his, Giovanni Vellita, was the Lord of Greccio, two miles away from Assisi. Like Francis, Giovanni had renounced worldliness and wanted to return to the poverty and simplicity of the first Christmas in Bethlehem. On Christmas Eve the manger was prepared in a cave, and an ox and ass were brought in. Local people began to come in procession, carrying torches and candles, and Mass was celebrated over the crib. In Greccio you can still see the stone where the hay was placed and the carved image of the baby was laid. There were no figures of Joseph and Mary, just the two animals. 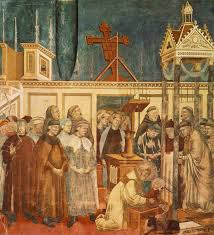 This fresco in the upper church at Assisi by Giotto, who was born only forty years after Francis died, shows the saint at Greccio during that first dramatisation of the nativity in 1223. A contemporary described Giotto as "the most sovereign master of painting in his time, who drew all his figures and their postures according to nature." Every Christmas this Nativity scene is still acted out by the people of Greccio.

This idea spread rapidly throughout Italy and Catholic Europe. People later made cribs out of straw and clay figures and put them in churches, schools and in their homes. In Naples you can still buy these figures from street stalls and there, particularly, the presepio became an art form and was often very elaborate, like the one below. 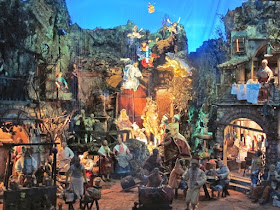 Eventually this charming tradition spread to Protestant countries as well. In England people used to bake a mince pie (using meat, not raisins) in the shape of a manger which would hold the pastry christ child until dinnertime, when the pie was eaten. The Puritans banned Christmas celebrations and outlawed such pies, calling them "Idolaterie in crust".

There is a legend that at midnight on Christmas Eve animals have the gift of speech; because the humble farm animals gave the infant Jesus His first shelter, and warmed him with their breath, they were rewarded with the gift of human speech.Thomas Hardy knew this legend from his Dorset childhood and wrote his poem, The Oxen:

Christmas Eve, and twelve of the clock.

"Now they are all on their knees,"

An elder said as we sat in a flock

By the embers in hearthside ease.


We pictured the meek mild creatures where

They dwelt in their strawy pen,

Nor did it occur to one of us there

To doubt they were kneeling then.


So fair a fancy few would weave

In these years! Yet, I feel,

If someone said on Christmas Eve,


"In the lonely barton by yonder coomb

Our childhood used to know,"

I should go with him in the gloom, 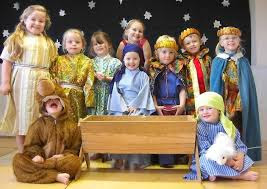