Those readers who know me personally will detect a certain irony in this post. Those who don’t know me personally must be informed that I have a plenitude of bosom and frequently complain about my burdens. Indeed, I work on the theory that I was given the wrong breasts and that daintier ones would suit my character and lifestyle better. But enough of that ...

A few years ago I researched an illustrated book about feminine nostrums: quack preparations for women that played – for profit – on feminine insecurities and body dysmorphic disorders. Much work went into that small volume, and much outrage too. Only a fraction of the material could be used in the published book, so I have raided that research for several of my novels – a Bankside notion-monger called Valentine Greatrakes in The Remedy, quack complexion cures in The Book of Human Skin, London mermaids with the vapours in The Mourning Emporium, and hair treatments in The True & Splendid History of the Harristown Sisters.

Until now, I had not given breasts - or breast quackery - a second look, except for a little flurry in the History Girls private forum last year when we traded historical names for breasts. Over that, I also draw a veil.

But all things quack are of interest to me, historically and linguistically, so I have decided it is time to revisit charlatanism of the cleavage. 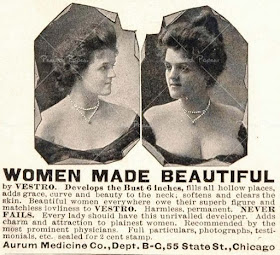 In the days before silicone and surgery, various ‘laboratories’ developed creams and tablets that purported to increase breast size. As is typical of quack medicine, they attempted to blind their clients with pseudo-science, using words that smacked of the laboratory but were in fact empty confections of senseless syllables.

Regularly invoked were the names of doctors and physicians (of dubious qualifications) - the historical equivalent of television advertising featuring people in white laboratory coats. Adulatory testimonials were published. The advertisements invariably claimed that the products were ‘100 per cent safe’, and they may well have been so, but they were certainly also 100 per cent useless.
﻿﻿﻿﻿
During the American Civil War, many soldiers became addicted to an alcohol-based tonic called Peruna, sold as a cure for catarrh (although the maker defined catarrh as the basis of half the world’s diseases). The effects of this 28% proof liquid even gave rise to a new phrase, ‘Peruna drunk’. (Later, when his ingredients were outed, it was suggested that the inventor should put some real medicine in his drink - or open a bar.)

Clever quacks set about selling remedies to cure dependence on Peruna, especially after it was outed as a temperance-busting fraud in the early 1900s. But manufacturers turned their sights on the female market and the same drug was sometimes sold as a breast-enlarger.

Then there were the ‘flesh-making’ bust creams for the ‘undernourished’ tissue. Ingredients usually included lanolin or other natural fats. ‘Flesh-firming’ creams relied on astringents to ‘tighten and lift’. One recipe entailed a night-time painting of the breasts with ‘elastic collodion’ to keep the sleeping bosom supported overnight. E.A. Fletcher, The Woman Beautiful, 1899, suggested that a firming cream should be dotted on but not rubbed in before the collodion mask was applied.
﻿﻿

﻿
A Doctor (of course) R. Vaucaire of Paris (naturally) introduced goat’s rue, Galega officinalis, as an indispensable remedy for flat breasts. It had previously been used to encourage milk production in domestic animals.The 1930s were a grand time for the breast quacks. Biological ingredients such as placenta or embryo extracts were introduced with much fan-fare. Hormones were also much vaunted. The makers of Milo-Crème Lion attributed their product’s efficacy to its ‘30,000 Estrogonic Hormones’ that were ‘easily absorbed by the breasts’. The suppliers of Pro-Forma tablets claimed that they were prescribed by many doctors for weak and sagging breasts.

Quacks love to denounce their rivals.

‘Doctor Colonnay, the distinguished Physician of the Faculty of Medicine, Paris’ explained that he had performed experiments upon 200 ladies and could definitely refute the claims of others propagating ‘medicines, nostrums, prescriptions, dieting, apparatus, appliances, greasy creams, massage’. He claimed that his system, on the other hand, could create eight to eleven pounds of extra flesh in the desired parts, with healthy tissue created at will.


Strenuous arm exercises were popular, on the principle that the muscles of the chest could be developed to aesthetic advantage. I am sure you will have heard of the mantra ‘I must, I must, improve my bust’. This was originally 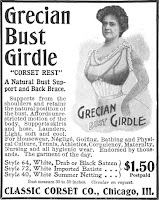 meant to accompany an exercise that entailed clenching the palms of the hands in front of the chest. Lifting heavy books was supposed to generate breast-enhancing muscle. (I must say that I can think of better uses for heavy books). Spring-loaded devices were also popular, promising that resistance combined with persistent exercise would create extra breast tissue. As late as 1966, there was a patent out for the Mark Eden Bust Developer, a clam-shell wire-sprung device in baby-doll pink. Breathing exercises were also suggested – because bigger lungs could only, of course, create a more splendid bosom. And that splendid bosom of course required harnessing in the correct corsetry, as shown at right. In the Victorian period, you could take advantage of Bazalgette-quality engineering to put you right, as seen below.


Some of the quack breast treatments involving pumps and suction must have been very painful. The instruments themselves were rarely illustrated in the advertisements: just the delectable result, as in the Fem-in-a Bust Developer. What was not shown, usually, was the hand or foot pump that was used to suck fluid into the breast via a mammary cup. While these treatments must have been painful, with the introduction of electricity they became positively dangerous, with a risk of ruptured blood vessels.

Le Massosein (get it?) of France in the mid 1930s sold a machine with a massive cup and hose for douching the breast with cold water. The Abunda Bust Developer also used hydrotherapy to ‘stimulate’ breast growth. The device was plugged into a tap that sent water gushing through perforations in a plastic breast cup.

Bust massage was popular, though advertisers were always aware of the moral dangers of conferring pleasure. Lucille Young, who offered Bust Massage in Chicago, advertises herself with a picture of a gentle, smiling young lady, who surely never knew a moment of transgression. Mechanical rollers and later electrical vibrators were sold for discreet and strictly medical self-massage in the home. 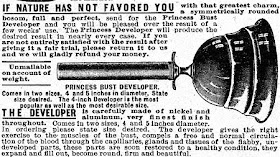 The Sears-Roebuck Catalogue of 1897 offered both the Princess Bust Developer and Princess Bust Cream Food. The 1905 catalogue devoted half a page to these products. The Developer was a bell-shaped cup of aluminium and copper, with a metal rod for handling. The advertising promised that correct use of this device could increase bust size by three to five inches. 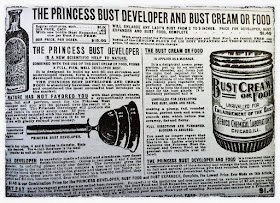 A quick look at the internet reveals that the quacks have never abandoned the profitable field of breast-enlargement. Painful pumps are still marketed today, as are ‘natural’ vegetable drugs. And the makers are still using pseudo-scientific terms to describe their expensive contraptions and concoctions.

I leave you with a genuine quack advertisement. Below is a letter sent out by The Olive Company for the National Developer for the Bust, 1920s. It deploys all the mischief of nurtured body dysmorphia, impossible promises and emotive language that are the trademark of the medical charlatan. Read it and weep, ladies, and think about it the next time you see a beauty product advertised on television.

… No longer need you be ashamed of your bust or your scrawny neck, nor need you fear evening gowns or low-necked dresses, which are all the fashion now, for you may have beautiful breasts yourself, little domes of beauty on a shapely chest.

Oh, lovable woman, don’t waste your moments in regrets and unrealized hopes any longer, for we bring you ‘Good Tidings of Great Joy!’ and you will bless us for years to come for giving you the opportunity to secure this glorious invention at this special price …

Think of all the stage beauties who have become famous – Lilian Russell, Maude Adams, Lina Cavalieri; the moving pictures stars – Lillian Walker, Marguerite Snow, and Kathlyn Williams. What was it but the charm of a perfect figure that helped to make these celebrities famous? You never saw a famous actress or a moving picture star with a scrawny, flat chest.

Think of all the women you know in your town, who are most prominent socially, and who have the most friends. In nearly every case they have beautiful figures, well-developed busts, the charm of perfect development. It is not the pretty face that makes a lasting impression on men, but the charm and poise of a beautiful figure, a PERFECT BUST – the crowning glory of womanhood.

Send us your order now, and let your fallen, flaccid, undeveloped breasts expand and blossom into that superb development which it is perfectly natural and right that every woman should have – a beautiful bust of real, firm flesh and blood. 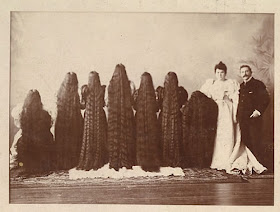 Her most recent adult novel The True & Splendid History of the Harristown Sisters, an account of hair quackery, is published by Bloomsbury.


Note, a further update on the London Borough of Southwark’s conservation policies: a wooden hut advertising a certain pod company has mysteriously appeared in front of the replica of the Golden Hinde. It has been erected in a pedestrian area with traffic of up to 200,000 pairs of feet a week. But its site also happens to be within the Borough High Street Conservation Area, and it is squarely positioned in a protected historic view of the Scheduled Ancient Monument of Winchester Palace. The pod first appeared a month ago, though there is no record of it on Southwark’s planning register. We have been told that it was ‘donated as an office’ to the Golden Hinde, which already has an office in Clink Street, luridly festooned with its own advertising. The pod is empty apart from its advertising billboard for the company that manufactures it. Southwark seems to be on the way to establishing itself as a natural haven for those companies that wish to profit from propinquity to genuine historical stock while at the same time destroying the historic aesthetic of that very spot. The sadness is that, as with the subtenant of the Famous Chain of coffee shops mentioned in my previous posts, Southwark allows this happen. And yes, Famous Chain’s subtenant is still sporting his illegal A frames, balloons and merchandise, even though there is now a non-compliance case number.