The Lost Library of John Dee by Mary Hoffman


I must declare an interest. I based a character in my Stravaganza series on John Dee. William Dethridge is an Elizabethan alchemist, mathematician and calendarist, who started the whole business of "stravagation" in time and space through an alchemical accident with a copper dish. 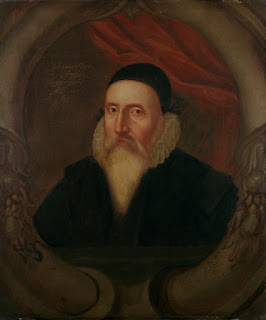 By 1594, the date of this portrait of John Dee (artist unknown), William Dethridge had made his last stravagation, to avoid execution in Elizabeth's England and was a permanent resident in Talia, my version of Italy in another dimension, in the sixteenth century.

So you can imagine how thrilled I was to discover there was an exhibition about John Dee in London, perhaps surprisingly at the Royal College of Physicians. I hotfooted it there on its first day and was immediately impressed by how beautifully curated it was.

Unlike the Celts exhibition, which I wrote about on 1st February and which I saw on the same day, it was not marred by woozy sub-Enya massage room music. The signage and labels are a model of clarity and they have managed to make a modestly-sized display of real interest.

Kate Birkwood has pieced together the life of John Dee (1527 -1609) through the annotations of his books - a feat all the more remarkable since his library was ransacked and dispersed in 1583, when he left England for the continent and stayed away five years.

At  over 3,000 books and 1,000 manuscripts it was a library worth ransacking, unusually large for the period as a private collection. About a hundred of the volumes stolen from his house in Mortlake are now in the hands of the RCP, complete with their marginalia.

Many of the pilfered books ended up in the possession of one Nicholas Saunder (1563 - 1649), but it isn't certain that he was the thief. Whether or not he was, he certainly knew the books had belonged to Dee, since he tried to obliterate the older man's signature and other marks. Saunder's collection passed to Henry Pierrepoint, Marquis of Dorchester (1606 - 1680), who was another bibliophile. Upon Dorchester's death his family presented them to the RCP.


Trinity College, Cambridge and the British Library each hold a copy of John Dee's library catalogue, made before 1583. Dee had been a student at St. John's, Cambridge and became a founding Fellow of Trinity in 1546, under Henry Vlll. Some of these books, including the Cicero above, date from his student days, when, "I was so vehemently bent to studie that ... I did inviolably keepe this order: only to sleepe four houres every night."

Something today's students might find familiar, for other reasons. And who hasn't doodled in the margins of a text book?

He had two famous patrons: William Herbert, Earl of Pembroke, who some think was the Mr W. H., dedicatee of Shakespeare's sonnets, and Robert Dudley, Earl of Leicester, who certainly was Elizabeth the First's favourite. It was Dudley who introduced Dee to the queen and he took the astrologer's advice about the most auspicious date for her coronation - 15 January 1559.

This is a painting by the 19th century artist Henry Gillard Glindoni. It has been X-rayed to reveal that Dee is standing within a circle of skulls! It's not known whether this is based on some now lost information about the queen's visit to Dee's house in Mortlake or was a product of Glindoni's imagination. But the later decision to removed the circle of skulls and other alchemical objects must have been an attempt to tone down the "black magic" aspects of Dee's reputation.

They were what got him into trouble with an earlier queen, Mary Tudor. He was arrested for witchcraft in May 1555, accused of casting the horoscopes of the queen and others of her family but was never convicted. He had in fact entered the Tudor court four years earlier, as a young man, and we know he received a pension from Edward Vl. Remarkable really that he survived through four monarchs, technically five, since he lived till 1609, six years after James l of England and Vl of Scotland took the throne. But by then John Dee's own star had waned and he played no part in the Jacobean court.

As well as the books and marginalia, there are some lovely objects in this exhibition:

But to return to the books, I learned something completely new about John Dee - he was the first person to suggest that there might be a national library! In fact he petitioned Queen Mary in 1556 to start one but, perhaps because of his earlier arrest, she did not grant his request.

Scholar, courtier, magician, as the exhibition labels him, and a supporter of libraries. No wonder I was always interested in him.

For anyone who can't get down to London before 29th July this year, I recommend Benjamin Woolley's book The Queen's Conjuror: The Science and Magic of Dr Dee (HarperCollins 2001).