The Lost Research - Island of Bones by Imogen Robertson

On Tuesday of this week I was at an event in Cambridge with a host of other crime writers, and writers of historical fiction. A young man in a flat cap approached and, having introduced himself as an aspiring writer of historical fiction, asked ‘How much research do you do?’ I gave him a bright smile and my usual useless, but utterly true answer. ‘You know. Way too much, and never enough.’
In a sense, and despite the title of this post, no research is lost. It all informs your writing about a period. Every book or newspaper you read, every house you visit, every antique gun you get to handle courtesy of generous re-enactors; it all adds to your knowledge of a time, its textures and flavours. That said, I am sure I am not alone in having notebooks full of research notes, anecdotes and sketches of historical characters that, I fear, will never make it into my novels. And that’s a shame because in each nugget lies, I think, a story waiting to be unfolded.
I spend about four months of the year in various libraries, gathering odds and ends before retreating to my study to write. I’m like a literary squirrel. Then I start work and, as the plot develops and the characters begin to move about in their world, some of my research becomes a lot more relevant than the rest. Those parts of my notes I return to, re-read, flesh out. Often the characters head off into some area I’m not that au fait with, and I’m back in the library again. In the process, some of those early nuggets get lost, and it is not until the book is written and I’m flipping through the notebooks before adding them to the growing stacks in the attic that they reemerge (can you tell where I’m going with this?) the same way the squirrel’s secret, forgotten stashes emerge in the Spring. Ok. I promise to leave that analogy alone now.
My latest book, ‘Island of Bones’, is set in the Lake District in 1783. During the research for the novel I wandered around Keswick and Derwentwater a lot, and read everything from the period I could get hold of written about the town and the lakes in general, and let myself sink into the folklore. There’s a lot in the book, but here are some of the nuggets lost that I am sorry I could not use. 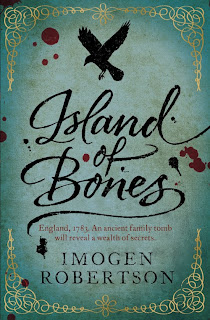 1. The popular guide to the area of the time, by Mr West, includes extracts of Horace translated into the Cumbrian dialect.


2. In 1745 more than a score of witnesses swore before the local magistrate that they had seen a ghostly army march over Souter Fell.


3. You can identify the sea spirits that sometimes hang around Holy Wells by their green teeth and wet clothing.

4. Dragons hate nothing more than the stench of burning bones. (Which is ironic, when you think about it).

5. A man stole a beehive and was identified by his being covered in a great number of stings on his person. Examined before William Hicks Esquire.

6. A meteor was seen on the night of 19th August 1783 across the country. In Canterbury ‘the whole hemisphere was as bright as noon-day’, it had ‘a beautiful train of various coloured stars and burst with an amazing explosion so great as to even shake some of the houses in the village.’

7. During the storms of July a steeple was split in two and an only daughter of Rev Mr Cranwell was struck dead by lightning as she was writing in her room. 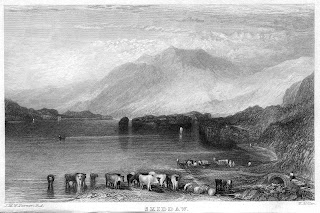 8. The Regatta on Derwentwater took an unusual turn in September 1783 when the gentleman supposed to be surrendering Pocklington’s Island during the fake naval attack, got drunk and refused to give in.

9. Before Wordsworth grew up and he and his cronies started stealing all the glory, the Muse of Cumberland was Susanna Blamire. She died in 1794.

10. In the Scots magazine of 1785 the death is recorded in Keswick of John Maxwell at the age of 132.
I wish I could write them all, but if your imagination is fired by any of the above, I hope you do.
Island of Bones is available in hardback
Anatomy of Murder
Instruments of Darkness
Imogen's Blog
Posted by Imogen at 02:16

What a fascinating article, Imogen. I especially like the nuggets you had to leave out. Horace in the Cumbrian dialect! Green-toothed sea-spirits! A meteor lighting Canterbury like noonday!

It takes real self-control not to throw in every gem we unearth. At least blogs like this give us the chance to mention the gems we had to leave out.

Oh those nuggets! I sympathise. There's enough there for another book. Great post, Imogen.

Yes, this captures the frustration of all the stuff you have to leave behind!

I do think, too, that sometimes when you trip up on too large a dollop of delicious info in a historical novel, it's because the author couldn't bear to leave it out.

Absolutely! I think it's so important to wear your research lightly, but it does mean leaving some gems on the roadside. As Caroline says, hurrah for the blogs where we can put them on display.

Great stuff, Imogen! I might bagsy those spirits that hang around the well sporting green teeth!

Mmmm! And I love the meteor - I wonder if any fragments might be buried on the moors?

I love the drunken re-enactor of 1783 refusing to surrender Pocklington's Island. I imagine him getting extremely obstreperous and then being totally bewildered the next day when no-one would speak to him!

Very interesting post, Imogen. I do agree that we have to leave out more research than we put in. But then research is fun, isn't it?

It must be very hard to leave those wonderful bits out, but are they really completely gone? I think they deepen your familiarity with the time and place and subconciously color the parts left in the book.

Imogen, having read this post, I'll definitely be checking out Island of Bones. :)

Shawn, you are right, no research is ever really lost. And as Barbara says, research is great so I don't resent time spent on things I don't directly use. Katherine, I think there's a timeslip sci-fi waiting to be written about meteor fragments on the moor! And Nikki-ann, hope you like the stuff that actually got into the book.
;-)