OUR ISLAND STORY by Adèle Geras 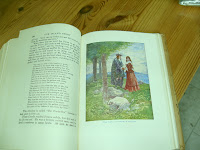 My copy of this book is sixty years old. It was given to me as a leaving present by my teacher when I left my school in Lagos to go to Jesselton, North Borneo. I covered it back then in brown paper to preserve it and the paper has weathered the years very well. 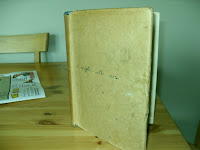 The inscription inside the front cover reads: Adele weston June 1st 1951. Lagos.
I wasn't as fussy then as I am now about the accent on my first name and I'm not a hundred percent sure of my capital letters either. 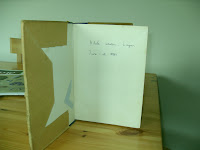 Our Island Story is written by a woman, Henrietta Elizabeth Marshall. It was first published in 1905 and in 2005, after having been out of print for ages, it reappeared in a centenary edition. If any of you was a teacher at that time, you might remember your free copy of this book appearing in the post. It was distributed, apparently, to every school in the country as a kind of present and I have no idea of the way it was received when it arrived, nor what the children who read it in the 21st century thought of it. Marshall mixes legends in with 'proper history' and that might have made it seem a little more 'fictional' than your average history book.

I'm certain that the kind of history purveyed in its pages is full of dreadfully old-fashioned things: Colonial not to say Imperialist views and a storytelling style that was common in the kind of book read by children in the Enid Blyton days: bland and cosy to say the least. There are clear villains and heroes. The British are always the best, it goes without saying, but one thing can be said for Our Island Story: it had lots of great women in it: Elizabeth, Queen Victoria and Flora Macdonald, not to mention Florence Nightingale and the wonderful (no Boudicca nonsense here!) Boadicea. 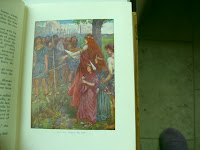 Just get a load of that hair! This picture accounts for my passion for red-headed heroines. They feature in a great many of my books. Okay, Rita Hayworth and Anne of Green Gables can take their share of the blame, but Boadicea was the start of it. The caption under the picture reads: "Will you follow me, men?" - a feminist call to arms if ever there was one. I fell in love with the romance of history through pictures like these and the stories which accompanied them.

Look at this illustration showing the two Princes in the Tower. Was there ever a more heart-rending caption than the one under this picture? It reads: The days seemed very long and dreary to the two little boys. 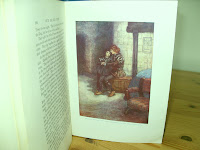 And now see this. Look at the dresses accompanying the story of the Pipes at Lucknow. In the text, one of the women is described as being in a fever and crying out deliriously: "Dinna ye hear them? Dinna ye hear them?" and those are the words under this picture: 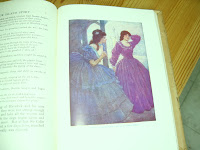 Well, if that was what one looked like while waiting in agonies of fever for the relief of Lucknow, it didn't seem to be such a terrible fate after all. The illustration led directly to years and years of very inadequate crinoline-drawing on my part. My rough book at school was covered in dresses just like these and these two outfits, the purple and the blue are what come into my mind when I think of someone in Victorian costume.

Here is Richard Coeur de Lion...oh, I loved his story! The caption reads. "Richard went away to Palestine." 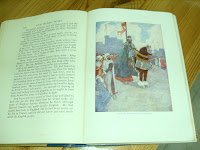 Here, another favourite of mine to this day, is the tragic Mary, Queen of Scots. Her caption says: "For nineteen years, this poor queen was kept in prison." I found it heart-rending and cried whenever I read her story. 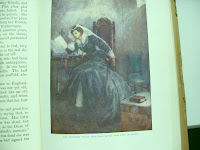 And here was a tale that bred in me a continuing love of romance. It's the story of Flora Macdonald and Bonnie Prince Charlie and the words under the picture say: "They took a sad farewell of each other." To me, when I was seven, it was total bliss, imagining that farewell. You can't see it very well in my photo, but that white blob at the lovers' feet is a pretty little sheep.

These photos were taken with my very low-tech camera and my non-existent photographic skills but I hope they've shown a little of the magic of this book. Almost every history book I've read since is 'better' in the sense of being more accurate or better-written or illluminating, but this will always be the enchanting one, the one that told me, loud and clear: There are brilliant stories in these pages of gallantry and tragedy and love. Come in, don't be scared you won't understand this thing called History. You will, and you'll love it.

PS Since I wrote the first draft of this post, it's emerged that fewer and fewer pupils are opting to study History for GCSE. Eve Edwards argued recently on this blog that historical novels should be used to enthuse children about history and she's right. She says, also, that History is being studied in all sorts of interesting ways today, when it IS studied. But I think there's also room for presenting it as a series of thrilling stories, just as H. E.Marshall did in her book.
Posted by adele at 07:30

I've never seen this book, Adele, though I've certainly heard of it. It's just the kind of book I'd have loved as a child!

It was RJ Unstead and Arthur Mee who brought made history important to me, but this is all so right and so familiar.
I think part of the charm of these books was that in those far-off days we were really seriously starved of pictures, and every illustration was absolutely cherished.
It's lovely to see these pictures again and remember how important they were.

This is a wonderful book, Adele. You were very lucky to have it and must have treasured it over the years. The pictures are wonderful but I'm delighted to say that history books now published for KS 1&2 bay educational publishers are beautifully illustrated and written to appeal to their appropriate age groups. I think we have progressed very well in this respect. Sadly, when I was at school I had no book like yours nor one of the new breed. My books were incredibly dull and that was how I viewed history until I was much older.

I agree, and though the 'waiting for the pipes' is truly and tragically ludicrous, nevertheless I think you have a point. I too learned history as a lot of exciting stories. And they don't have to be Imperialist. The Peterloo massacre? The Putney Debates? Put a hero into any of these, or the Chartists, as Geoffrey Trease did, and you can draw children in to them. As for the illustrations, the rest are marvellous, oh, I do love those wonderful old-fashioned illustrations. My absolute faves are Charles Folkard's ones for George Macdonald's 'The Princess and the Goblin,' etc.

I remember winning a book token at school when I was about 9, and I used it to buy this book because the pictures enthralled me. My mother took a look at it and said, what a nice book, but then gave me a copy of 1066 and all that, which was a great antidote to Marshall's somewhat martial tone. I read both with enthusiasm, and I agree about the effect entirely, it kindled a passion for the human stories within history.

When the centenary edition appeared, my husband was about to buy it to read to our eldest son, then 8, but I pointed out that we had a perfectly good copy. Minion No.1 enjoyed the gung-ho tone thoroughly.

What a lovely way to recall how we initially fall in love with books! And I agree, historical fiction can and should inspire children and readers to dig deeper into the "real" stories of history.

'But I think there's also room for presenting it as a series of thrilling stories, just as H. E.Marshall did in her book' - how about we write one? 28 stories, one each. You could edit it, Adele. Publishers would love it.

Brilliant idea, Louisa...but VAINS me as editor, as we used to say long ago at School. I nominate MARY HOFFMAN...she doesn't seem too busy at all! But seriously, lots of others would be excellent editors. I'd hate the very idea but would happily contribute!

I didn't have Our Island Story as a child but my husband did. It seems to have influenced a lot of people of our generation. I would have loved those pictures too.

As for the book of stories, well, maybe we will do just that.

I remember there being some wonderful historical novels around for older children in the 'sixties when I was growing up. Sheena Porter and Hester Burton - names you hear little of these days (I think Marjorie Gill did the illustrations for some of them).

In the primary school where I work as a librarian I've found the "My Story" series by Scholastic quite a useful starting point for history - quite a few of the girls who gobble them up progress happily to historical novels and, in fact, the staff borrow them, too. I'm thinking about starting up a history reading club, such is the level of interest.

'Richard went away to Palestine' - gosh that's an under-statement.
I love books also, and am happy when they are all about a room in piles, calling out to me to enter their world.