While Louise Berridge is busy meeting a deadline, we are very pleased to have an extra guest post from Pippa Goodhart, who takes us from her mother's ring to the Klondike Gold Rush

My Mum, who is no more of a glamorous dresser-up of a lady than I am, had just one extra ring which she would put on if she was going out to something very special. Here it is: 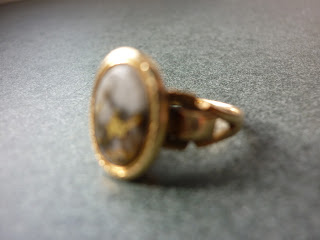 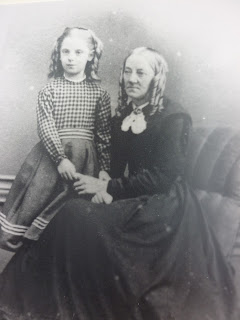 William James was a traveller and entrepreneur. In about 1888 he brought back silk for Florence’s wedding dress from Yokohama in Japan, the first port opened to western merchants in the late C19th. He apparently has streets (William Street and James Street) named after him in Oxford. But of his fabled trip to the Klondike I know nothing.

So I got reading about the Klondike Gold Rush…and reading…and reading because it is so extraordinarily interesting. After a few fortunes were stumbled upon in the Klondike wilderness of very north-western Canada in 1896, the gold and the news of it came out the following spring thaw. In the two years after that over a hundred thousand people from all over the world did the terrifying journey to get to the Klondike. There are diaries of those who went, stories from characters such as Jack London who were there, and there are telling photographs of characters dressed and posed ready for the adventure, then hollow-eyed, bearded and gaunt as that adventure takes its toll.
Online I found and bought The Chicago Record’s Book For Gold Seekers, published in that Gold Rush year of 1897, and full of maps and shopping lists and information about how to travel and live and mine for gold. 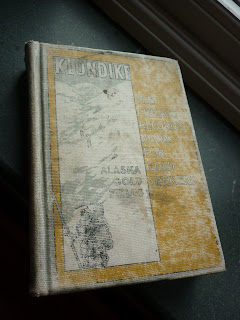 Wonderfully, this contemporary book was cheap because ‘covers and spine are badly faded and heavily rubbed’. I expect that most people reading this blog would have had the same reaction to that description as I had – gosh, it’s actually GONE to the Klondike and back! And it clearly has! With someone called Freemont Russell who signed ownership inside the front cover of the book. The book’s inside pages are pristine, but the outside has been worn by being carried in luggage for thousands of miles of adventure almost into the Arctic. 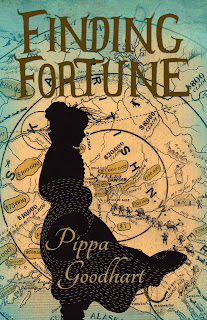 My story – Finding Fortune – is about a child, Ida, whose mother has just died, and whose father has much to prove to himself and to the grand family of his late wife. He decides to go to the Klondike, which, after all, was British at that time, and Ida determines to go with him. The story is of their journey across the Atlantic, across Canada, up the western US coast, and then inland over the notorious Chilkoot Pass to the frozen lakes where the hundred thousand or so Argonauts had to make boats to take them downstream once the spring thaw let them sluice down the river to gold-mining territory. They had to carry their ton of goods each that the Canadian government sensibly stipulated for people heading to a place empty of shops. 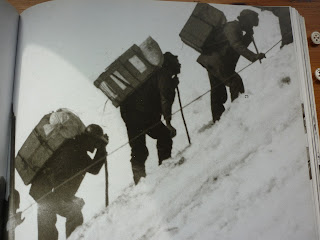 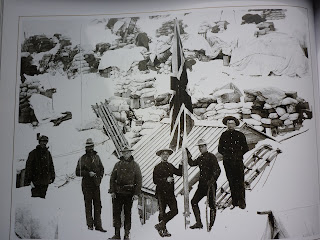 Extraordinarily, once they’d arrived from their months of journeying, many of those who had made the journey simply gave-up. They sold what they could of their tons of goods carried all that way, then got the first ticket home available on the steamships. They saw how few were actually finding any gold, let alone fortunes, and decided to cut their losses. But Ida and Fa are too determined and too desperate to give up …

A problem which any historical fiction writer who develops a passion for their subject must meet is that of selecting from the wonderful facts they want to include in their story. There is the obvious danger that the story is wrenched from its natural story course in order to ‘happen upon’ every interesting trifle in the writer’s bag of historical goodies.

In this story I took to including letters that Ida writes home to her Grandmama – stiff dutiful letters at first, but increasingly chatty as their relationship develops through this one-sided conversation. Those letters become key to the plot, but I confess that I first thought of having them simply as places in which to casually mention the runaway trains on Big Hill, the treacle mixed into the coffee on-board ship, the fact that gold is so very malleable that it can be beaten into gold leaf four hundred times thinner than a hair, that the strictly Presbyterian Indian packers also kept their traditional habit of thanking the spirit of a dead animal before eating meat or working leather, that hundreds of windlasses drawing-up buckets of pay-dirt (soil) make a great sighing sound, that bicycles were sold as just the thing to get over those mountains and down those rivers to the Klondike, that you could buy gold magnets (not) and there were people who purported to be able to taste gold in stream water, that you can cure scurvy with spruce-bark tea, and so on and so on. In letters those things can be mentioned briefly in passing, and don’t clog or distort the main story.

What tricks have you used as ways of including those irresistible tit-bits you long to include but don’t really have the excuse for in your main storyline?

PS After writing ‘Finding Fortune’ I found out a bit more about my Great Great Granny Polly (Mary Ann Rose), who supposedly was given the ring by her brother. It turns out that she died in 1881, sixteen years before the Klondike Gold Rush occurred! Hmm. Was the ring perhaps given to her daughter Florence? Or did the ring come from a different gold rush? Or no gold rush at all? Never mind. That ring set me going to the Klondike in my imagination, even if no relative of mine has ever been there for real!

Louise Berridge (A.L. Berridge) will be back in April)

What a splendid post - I really want to read your book - AND the old one, too. No wonder your mother prized that ring! All I know about the Gold Rush is the Charlie Chaplin film - perhaps it was more realistic than I thought...

A fabulous post, Pippa. My great uncle was in the goldrush too. We went up the Whitehorse pass on a train to recreate his journey to the goldfields. I shall certainly read your book with interest, and like Katherine, the old one too!

Terrific post Pippa. My brother's name is William James, after a long-lost relative. Mmmm.... So true what you say about the bag of wonderful facts collected when doing research and the problem in selecting what goes in.

In The Wickit Chronicles and the Slightly Jones Mysteries I had Did You Know notes in the back which is not nearly as cunning as your letter idea, but still a lot of fun!

Your book sounds great - looking forward to getting hold of it!

Katherine, I watched the Charlie Chaplin film as 'reasearch' (it covers a multitude of sins, that word!), and, daft though it was, it really did seem to capture something of the spirit of the whole thing.
Jean, I'd LOVE to visit that area, and of course it is possible to do so in relative comfort these days. I wonder how close it is to what I've imagined?
Theresa and Joan, yes, I've added historical notes at the back of a novel (Raven Boy) before now because I found it all so interesting and hoped that readers would too. But sometimes those juicy little snippets might make a quite different story of their own.
Thanks to all wanting to read the book! I gather that it is, after delay, on it's way from the printers in India, and I'm looking forward to seeing the gold effect title lettering that will give it a positively Jeffrey Archer novel kind of look!

I have just finished reading the book, and searched out your website to find out about how you researched the book and all the many incredible details. The book which went to the Klondike is a wonderful find, what an inspiration that must have been! Isn't it amazing - one would think the price would have been very expensive for such an unusual book!
Your book was very exciting, and I thoroughly enjoyed it, although at times I thought to myself, "I would definitely have given up long ago, if that had been me!"