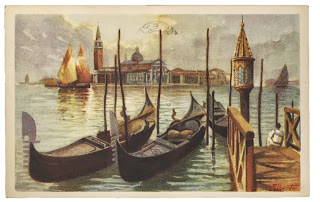 In 1902, the English folklore specialist Edward Lovett went to . He wrote, ‘"I found itinerant hawkers of curios selling the hippocampus, tied in bundles of three with red worsted. These were sold for luck, a poor survival of a very old and grander legend ... I found that the wives of fishermen, nursing babies, kept a dried sea horse on their breasts to facilitate the flow of milk … I am very much inclined to believe that the curious white metal prow of this remarkable boat [the gondola] is evolved from the seahorse.’
Folkloric objects such as dried seahorses, or even glass ones, live hard because of frequent handling. They often don’t survive except in records of anthropologists. So Lovett, wishing to preserve Venetian seahorsery for posterity, commissioned some glass seahorses, which can still be seen today at ’s Wellcome Collection.
Lovett (1852-1933) was best known for his publication Magic in Modern London (1925), which deals with both good-luck objects and folk remedies for various afflictions. One of my favourite recipes collected by Lovett is the Whooping Cough hair sandwich. The idea was that the parents of a child with the disease should trim some hair from the nape of their son or daughter, put it between two pieces of bread and throw it out of doors for an animal to eat.
Lovett’s connections with the Wellcome were strong and continue to be so. He himself curated an exhibition at the called The Folklore of London in 1916.
And his own collection featured in a 2011-12 exhibition called Charmed Life: the Solace of Objects, curated by the artist Felicity Powell. Her undulating display of tiny charms and amulets included a miniature Venetian gondola ferro as well as several of the pink and blue glass seahorses that were thought to be good luck talismans in in the nineteenth century.
I was very much taken aback at the sight of the cavallucio marino in the exhibition because at that point I was writing blue glass seahorses into a dystopian alternative 18th century for a children’s novel. In The Fate in the Box, I was imagining a city where automata were replacing the poor of every parish, who were consequently starving, and in which children were sacrificed in a barbaric ceremony known as the Lambing devised by my villain Fogfinger. Those who rebel against the regime form a band known as The Piccoli Pochi, or The Tiny Few, and their talisman is …. a blue glass seahorse.
As I often create window displays for bookshops, I decided to see if I could find some blue glass seahorses, like Lovett’s. Countless tramps around revealed only lurid multicoloured seahorses with labels that claimed a Murano provenance, but very obviously lied.
Inspired by Lovett, I decided to commission some proper seahorses of my own. I took a photograph of Lovett’s hundred-year-old seahorses to Marco Vettor, a proper Venetian glass merchant. A few weeks later he presented me with this beauty, almost an exact replica of those that Lovett had commissioned, also based on the real size of the original nineteenth century amulets.

I’m now working on the next book, and thought seahorses were behind me. But I was rereading my Ruskin this week for a television programme and came across a charming letter to Charles Eliot Norton, in which he wrote about keeping Venetian seahorses in a basin in his lodgings during a stay in 1857.
I love coincidences and loved that letter for what it showed of the humour and tenderness of this much misjudged man. Ruskin was disappointed because the seahorses would not curl their tails around his pencil when he wanted them to do so. Nevertheless he advised Norton to get a fishermen to bring him two or three cavalluci next time he was in and to put them in a basin so he could have the pleasure of watching them swim.
‘But don’t keep them more than a day,’ he urged, ‘or they’ll die, put them them into the canal again.’
Here is a video of a Venetian cavallucio being released to the wilds of the lagoon, just as Ruskin wished.
In the Miracles & Charms exhibition held in the Wellcome at the same time as Lovett’s, I noticed that the statue of Saint Jude in the church of San Hippolito in Mexico City was given a cloth mask during the Swine Flu epidemic – which was what gave me the idea of the saints having their faces veiled during the reign of terror in Venice created by Fogfinger in The Fate in the Box.
And from this week, a rare joy has been permitted to the public in – admission to the Conservatorium of Music, which is hosting one of the Biennale exhibitions. 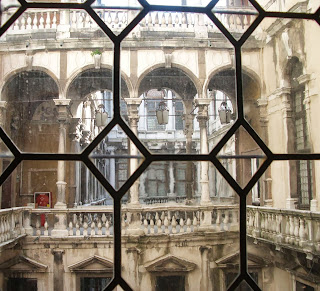 In one of the courtyards I found this statue, veiled just as I had imagined.

None of the staff with whom I talked could tell me anything about the statue.
They were amused that I wanted to know.
‘Un mistero,’ I was told conclusively.
And that was just what I wanted. 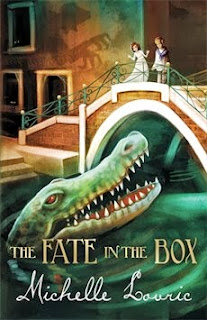 What an exquisite seahorse Marco Vettor made for you! And Felicity Powell's exhibition sounds wonderful. Fascinating post, Michelle - thank you.

What a wonderful post, Michelle. Full of MISTERIO and also belleza! Lovely blue seahorse and as for the veiled statue...well. It's as though Venice was entirely organized for you. And quite right too!

If only Venice WERE entirely organised for me! No bookshops would close and there would be no problems about filming the art in churches. The rats would migrate and the tourists would NOT send old ladies flying with their backpacks. No one would throw rubbish in the canal. Seriously, there are grave infrastructure problems in Venice, and sad days here at the moment, with a vacuum where governance should be, as described in this sobering article by Anna Somers Cocks in the New York Review of Books:
http://www.nybooks.com/articles/archives/2013/jun/20/coming-death-venice/

Michelle! This was a wonderful post... you win the prize for the most mysterious title... which I've come to a whole 10 days late.

My husband's grandmother who was a vey genteel lady always served crystal finger bowls with dessert or the fruit course and in them she placed glass seahorses. I have one somewhere in my sea house and will photograph it for you. It must be from the early 1900's as she was married and set up house in 1910.

Everything in your blog was wonderfully evocative and love the Welcome Trust too. Statues and crosses are often veiled in churches over the Passion week-end. That was such a beautiful photograph of the courtyard.

I found this post initially while searching for information on seahorses in folklore to back up my own article about that topic, and instead I've come across a book that I now really want to read! That said, any book set in my beloved Venice will always get interest from me :)