You never know what you will find when you set out to do some location research in . So one sun-drenched afternoon not long ago I threw off my crutches in an appropriately miraculous fashion (broken foot recovering), took my new fountain pen and my camera, and set off to find some mermaids, saints and street Madonnas for my work-in-progress. 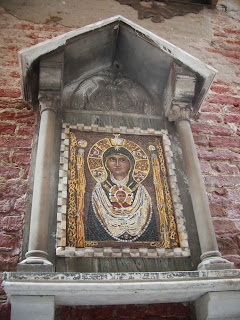 The capitelli or  mini-chapels of the Madonna are to be found all over Venice. They are usually inside a stone frame on a wall. I don't know why the Madonnas often look so tetchy, but they do. This one, in mosaic, is appropriately sited at the back entrance to the supermarket Simply, where many a modern-day Madonna bears her baby and her burdens with saintly sad patience. Some capitelli have structures that resemble the Tardis. 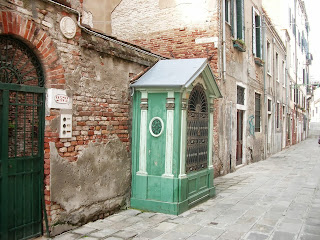 This one in the Calle Larga off the Misercordia in Cannaregio turns out to contain what seems to be a Saint Francis, apparently blowing raspberries on the Christ Child’s cheek. 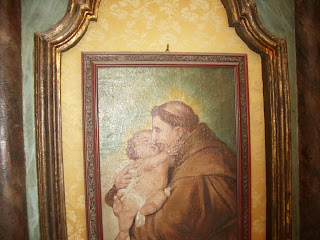 A little further along, we reached the triangular Campo dei Mori on the Fondamenta della Sensa for another visit to my old friend Signor Antonio Rioba, who features in The Undrowned Child and The Mourning Emporium.  Signor Rioba is known for his iron nose, and has also served as a symbol of popular subversion in , ‘voicing’ scandals with his own news sheet. For the next book I am more interested in his less-famous brothers, Sandi and Afani Rioba who also fled from political troubles in Morea in 1112, so I recorded their worn features, sadly noting that they are more eroded each time I visit them.
The next Madonna was a disappointment. The original image inside this handsome stone frame has been replaced by a miserable sub-Modigliani Madonna Dolorosa from a doleful period of the twentieth century. 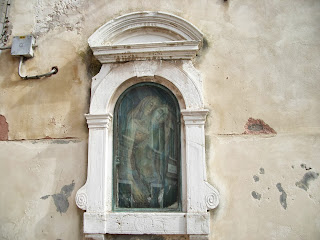 But, to cheer her – and me – not far away is this excellent example of a dancing bear rendered in stone. He's flanked by two dragons with corkscrew tails and supervised by a saint. Tassini tells me that the Calle della Fonte, where the bear lives, is named after a merchant family from Bergamo who bought their way into the Golden Book of nobles in 1646 but sadly died out in 1766. And the bear is the ‘stemma parlante’ of the Orso family, which became extinct after the last male perished from a dog bite. 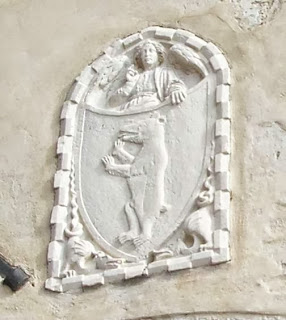 It is always worth peering into the grates that protect the ground floor windows in . In Cannaregio, there are some strange and wonderful things. Here is an eerie bambi in a deserted building on the Sensa. 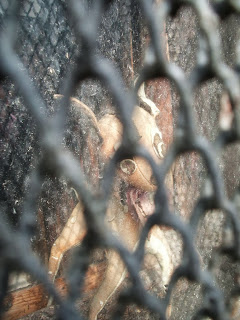 A little further along, at 3355, is a strong arm carved in stone. It is the symbol of a family cittadinesca called Brazzo or Braso who came from Tuscany and had many holdings inside and outside Venice.  One Goffredo di Brazzo founded the famous Scuola di San Marco at SS Giovanni e Paolo in 1437. The Brazzo family is also extinct. In 1641 Alessandro da Brazzo married Cecilia, a daughter of Giulio Maffetti, husband of Maria da Brazzo … the sister of Alessandrio himself.  Confused? Draw a diagram! Maria was constantly lamenting the ‘extravagant temper’ of her husband until her brother, in 1643, discharged an archibugiata (isn’t that prettier than the yapping ‘arquebus’?) into the face of his brother-in-law and killed him. Alessandro was then exiled along with his sister. All his worldly goods were confiscated. Their mother campaigned for their pardon and return. But on the journey back Alessandro was found dead in a stable with his head in the manger. Maria married again, a foreign official, but this marriage was no more fortunate, and she soon died. The wealth of the Brazzo family passed, along with the name, into the house of the Maffetti. The strong arm of the Brazzo family is all that remains. 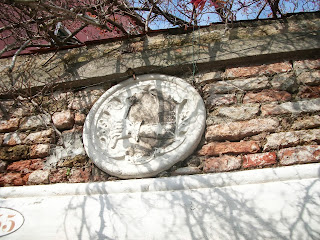 Among many roadside attractions in Venice is the plethora of little markets selling sweets. I love this one because of the long arms of the scoops. I have absolutely nothing of historical interest to add to the scoops. 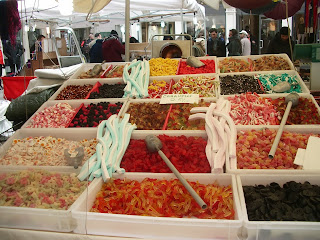 And here is an historical cakeshop (one of the antichi pasticceri venexiani) with chocolate owls, near the station. The religious significance of owls is deep – one is usually seen with Saint Jerome the hermit. But I am not sure of the relevance to chocolate. Just grateful. 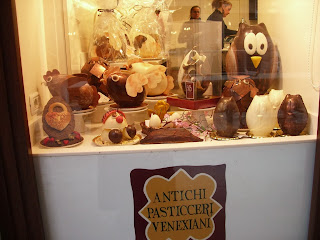 The mermaids of the church of Santa Maria dei Miracoli need their own blog, but here is a glimpse at their sleek and writhing forms, so unexpected in a Catholic church, but with an interesting story to tell (eventually). 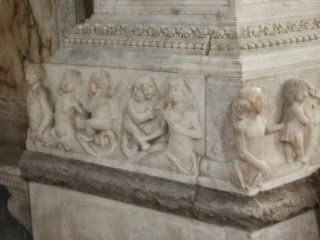 And finally a walk in the sunshine in Venice is never complete without a deviation to the Acqua Alta bookshop in Castello. And the owner Luigi has made some improvements, adding this staircase made of books that leads up to a beautiful view of the canal. 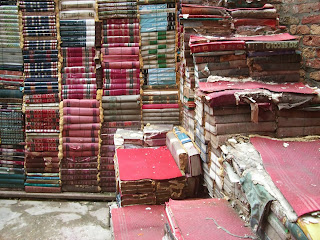 He’s also made two walls of books on the way to his new annexe at the back of the shop. 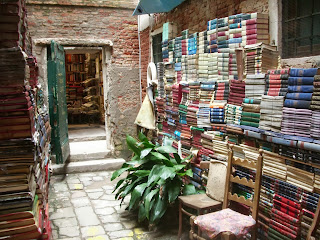 The cats of the shop were on full parade, as usual. Pirro (Pyrrhus, mad son of Achille) is particularly interested in literature and headrubs. 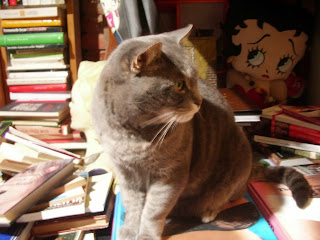 And, after a hard day's location research, who isn’t?
Michelle Lovric's website
Posted by michelle lovric at 00:30

WOnderful, Michelle! Beautiful images - and I feel at once enchanted and dismayed by the staircase made of books!

Thank you for taking me with you on your charming and instructive stroll around Venice, Michelle. In my imagination, of course, but still very enjoyable.

Glad that you are able to get around more easily.

Thanks for your interesting walk around Venice. The next time I go, I'll have to look harder to see just what I've missed before!

I, too, wander cities snapping architectural curiosities. I'm particularly interested in hangovers from Roman times. Faces on buildings are apotropaic and your capitelli are certainly evolutions from Roman shrines we see all over Pompeii and Herculaneum.

When I was travelling with my young nephews in Rome a dozen years ago, we had a game of who could spot one first and cry "niche"!

loved venice too for all the same reasons. Off the beaten track its magical. We also discovered the bookshop, and climbed a very soggy staircase and it's the one place I would love to return to.

What an excursion! Thanks for taking us along.