One at a time, please – Michelle Lovric

Can you imagine getting so close to one of your favourite paintings that your eyelashes almost graze the canvas? Can you imagine sharing the painting only with a couple of dear friends and a security guard whose love for the work makes you forget the pistol in his pocket? Can you imagine the said guard pointing out the tiny but perfect white cat in the centre of the scene, a cat that is no more than an energetic swirl of an inexpressibly expert paintbrush? And can you imagine doing all of this in a candle-lit abbazia in the middle of Venice? 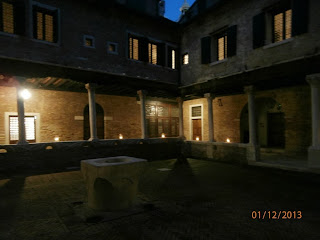 This is an experience on offer for just 50 days this autumn.


Astonishingly, there are only two Canaletto paintings currently resident in Venice – something I have written about for Mary Hoffman’s Book Maven blog. But for this brief and lovely moment in the winter of 2013 you can also see a third: one of his best-known works L’entrata nel Canal Grande e la Basilica della Salute (The Entrance to the Grand Canal and the Basilica of the Salute). 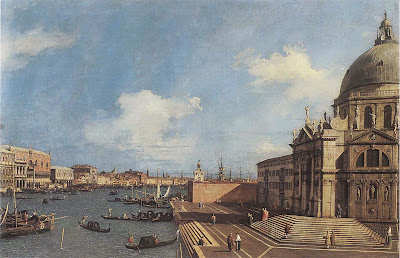 And here is the height of exquisiteness: you can see it in the exact same loggia where, between 1740 and 1745, the artist set up his camera obscura and his easel and sat down to record the wedding cake church of Santa Maria della Salute, the Punta della Dogana, the Palazzo Ducale and the Riva degli Schiavoni. The exhibition is called ‘Gero qua’ – Venetian for ‘I was here’.

How did this intimate Canaletto experience come about?


It’s a two-hundred-and-eighty-year old story. The art was of course created in Venice. Lady Lucas and Dingwall was the painting’s first owner. It was then sold to Henry Grey, Duke of Kent. In April 1970 a private buyer acquired it at auction at Sotheby’s in London. Now this philanthropist has lent the painting back to Venice.


In order to make the most of the 50 days, the painting is on display 24 hours a day. A maximum of 8 visitors are admitted each hour. The season sold out immediately.


First, at the appointed time, you enter the Benedictine Abbey of San Gregorio and stand in its courtyard, candle-lit from dusk, to hear the history of the place. Then you are led upstairs to the Canaletto loggia, to look at the painting. 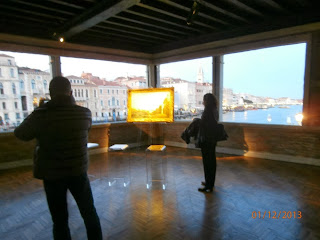 We timed it perfectly. We arrived just before four, when the light was dimming, so we first saw the painting in exactly the same kind of light that glows from the canvas. As the guard told us, the painting is thought to have recorded a spring afternoon at around three o’clock. We were seeing the matching autumn light at just the same time. 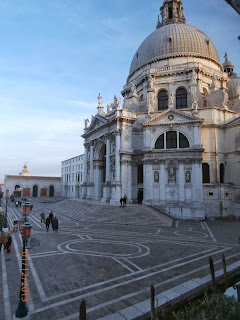 We spent a good half-hour with the painting, shyly approaching it at first, and then becoming bolder. We looked – really looked – in deep searching sweeps of the canvas for once, and then at the scarcely changed reality of Venice behind it. We listened to the guard, who had soaked up the knowledge of hundreds of visitors. He required very little squeezing to let forth a gush of droplets of enchanting facts. He told us that scientists had spoken of tracking the blooms of algae that discolour the canals via this painting; he pointed out that, despite the seeming photographic accuracy of the painting, Canaletto had transposed a couple of angel arms, and had scandalously included only thirteen of Santa Maria della Salute’s sixteen steps. 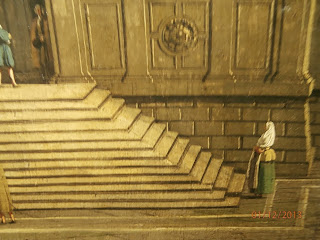 He pointed out how successive renovations of the Palazzo Ducale façade had left it sadly drained of the roseate tones that warm the Canaletto. He told us that with a magnifying glass you could make out the features of the faces of people crossing a bridge in the distant background of the painting. He showed us a sneaky profile peering out from behind a column. And of course he told us about the tiny squiggle of a white cat, right in the centre of everything. (I am afraid my camera is not up to it).


And we – two architects, a writer and a chorister, offered up our own bits of knowledge to the absorbent guard. The Danieli Hotel, we told him, was the old Palazzo Dandolo. And we were fascinated by what used to be beside it: the part now occupied by the hotel’s frightful modern wing. Three higgledy-piggledy houses of straggling heights occupy the site in the Canaletto picture. These buildings were not palaces; they were possibly warehouses: this perhaps explains why they were allowed to be demolished. In front of them stretched a long black awning, perhaps for the cafés that were just starting to feature in Venetian social life in the 1740s, along with a craze for hot chocolate and coffee.


Then the guard urged us to go next door to the room where yielding white sofas awaited us. Lying back, almost swallowed by plump upholstery, we watched the work of cinematographer Maurizio Calvesi, who had filmed the details of the painting using an innovative technique in extremely high definition. The camera swooped over the myriad of intimate encounters that made up the human part of the scene, delivering details of faces and clothing that it was hard to see with the naked eye in the original painting.

The restless camera rendered the orderly Canaletto suddenly noisy and messy with human life: the tall man striding through the centre of the scene appears to be talking to himself, angrily. The shoeshine boy utters his pretty patter to his noble patron, no doubt earning himself a tip as he flourishes his snowy-white rag before setting himself to work on those leather slippers. We felt the thud of bales of cotton being unloaded, the chuckling of the dark liquid inside barrels of wine. We saw the cynical face of a nobleman being petitioned for some favour by a commoner, the bulging muscles of the crippled man struggling up those thirteen steps to pray for his health. 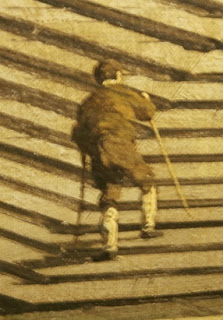 Canaletto’s quiet painting was now alive for us: we understood that the artist had also recorded the Venetians, their activities, their work, their sustenance in a way that a writer can only envy. Even the mooring pole to the left forefront of the picture had its story to tell. The water of the Grand Canal was in 1740 so clean as to be transparent. Canaletto showed its outline deep into the water. 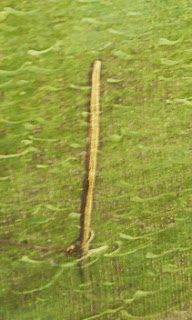 Then we came back to look at the real painting again, our knowledge enlarged by what we had just seen. Now the sun had set and the painting glowed in the room, more like an animation than a static piece of art.

Slowly and sadly, we left it, at the guard’s most discreet and regretful mention of the hour. We returned to the courtyard where we were offered drinks, and, most of all, a chance to descend from the almost dopiamine high of utter intimacy with a Canaletto exactly where a Canaletto should be. 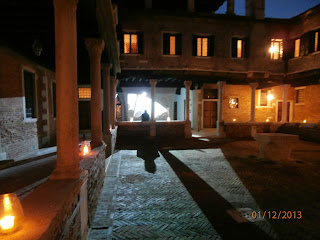 We strolled around the candle-lit courtyard, where another film of the abbazia was projected onto billowing silk, and then slipped out into the darkness of Venice, quite suffused with afterglow. It was a while before any of us could talk again. If any of us had smoked, it would have been the moment for a shared cigarette and a long, tender sigh.


The evening left me wondering about the physical research we writers do. And how it moves us. I am currently writing Venice in 1737 and so ‘Gero qua’ could not have been a more perfect experience for me. But there are other paintings I love, in galleries in London and Venice, which also deserve the ‘Canaletto treatment’. And can we not almost do it ourselves?


I worked as a Royal Literary Fund Fellow at the Courtauld Institute for Art for three years, which gave me access to the gallery as often as I wanted. Why did I not spend my lunchtimes as a devotee in front of any one of the magnificent works there? (Well, because I never had a lunchtime, but even so…)


We could all do this: give a painting what it deserves. What if we dared to go to the National Gallery, or the Courtauld, with a view to seeing just one painting, and thus really seeing it? What if we showed it the courtesy of research into its background before we saw it, so that we knew already what details were important? What if we allowed ourselves the luxury of a whole hour with one work, just the triangle of the painting, the writer and the writer’s notebook, with the writer’s words aiming to draw the past into the present?


Perhaps some of you have already shared such a long moment with a work of art of an object from the past? If so, please share.


Her eighteenth-century Venetian novels include Carnevale, The Book of Human Skin and The Fate in the Box.

What an inspiring post. How amazing to be so intimate with such an astonishing painting.

What an amazing post, Michelle! I felt as if I was there with you taking in the details of the Canaletto, fabulous! I wish I had been.
Yes, it's a great idea to study one painting for an hour. Perhaps if we cannot be transported to Venice, other galleries could replicate the experience.

What a wonderful experience this must have been! All too often, visiting an art gallery involves shuffling around and being stuck behind hordes of taller people. But I am now determined to seek out a lesser-known work on a quiet day. Thank you for this lovely post, Michelle.

naiss! can i go too?

I was there! And it was an enchanting experience.