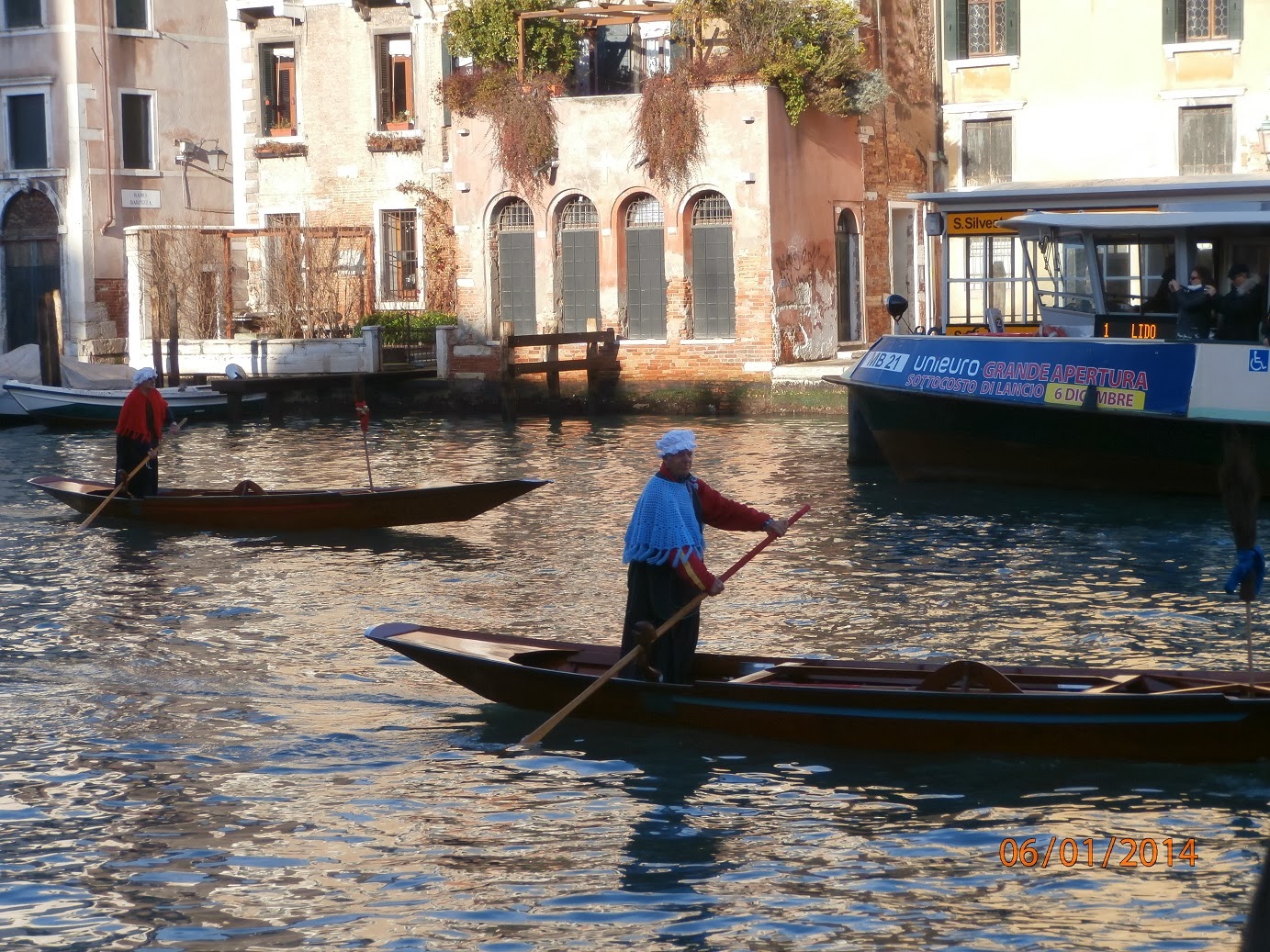 In Italy, children put their stocking out not on Christmas Eve but the night before January 6th, the Christian Feast of the Epiphany. Here’s one version of the traditional Italian poem about the Befana, the gap-toothed old hag who patrols the world on her broomstick that night, searching out youngsters.

The Befana arrives by night
in shoes all tattered and torn,
all dressed in blue, the Befana comes down.
She comes down the chimney with a sack packed full of stuff.
For the good, nice children, there are sweets and candy.
For the bold, bad children, only ashes and coal.

This week, I asked an enchanting little Venetian girl, Martina, what she expected in her stocking that night - coal or candy?

‘Have you been good all year?’ I inquired. 'Really good?'

With engaging honesty, she told me, ‘Così così.’ So-so.

I happen to know she received candy.

In shops all over Italy, the end of the Christmas season is signalled by the arrival in the shops of gap-toothed witch dolls on broomsticks, each hag bearing a stocking (“calza”) full of sweets, sometimes in the form of black, glittering sugar-coal.

The link with the Christian calendar is that this is the date when the Three Kings came to the Baby Jesus, with their gifts of gold, frankincense, and myrrh. Modern children, of course, prefer sugar.

There are many versions of the Befana story, but most agree that she was an intensely house-proud woman who hosted the Three Kings on their way to Bethlehem. In the usual story, she was invited to join them but claimed that she was far too busy with sweeping the house – hence her broomstick. But afterwards she was sorry, and went out to find the Holy Infant. She never did, and still roams the earth on her broomstick, looking for Him, and meanwhile distributing gustatory justice to children all over the world.

We do everything differently in Venice. It is not just that you sometimes see a Befana made entirely of garlic cloves at the Rialto Market. Or that the Befana often goes by the name ‘marantega’ in Venetian dialect. This is a word that could be translated a number of ways but I’ll go for ‘miserable old bezzom’. The maranteghe are the wailing widows of Venetian society, the diffusers of bad news, the walking death-notices, the scandalmongers and the mealy-mouthed mistresses of schadenfreude.

But the greatest difference between the Italian and the Venetian manifestations of the old bezzom is this: in Venice the Befana arrives not down the chimney but by water.

And she’s a man in a drag. Or five men in drag. 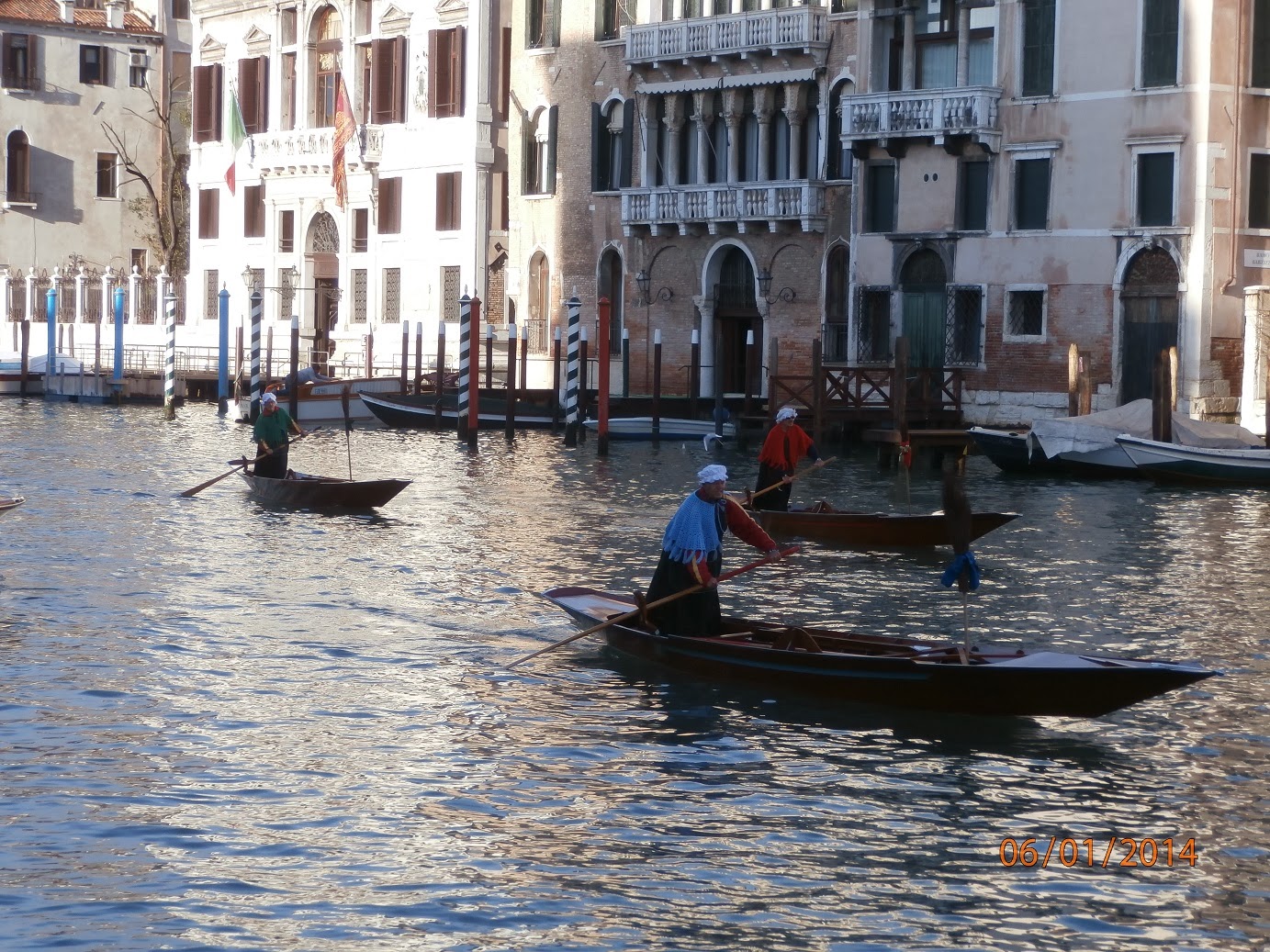 The Regata della Befana is organised every year by senior members of the most ancient rowing club in the city, the Bucintoro. The club is named after the glorious golden boat used during the Republic to take the Doge out into the lagoon to drop a golden ring into the water, symbolizing Venice’s marriage to the sea. Napoleon disposed of the boat, stripping down the gold for cash to feed his army, at the same time he arranged the burning of the golden book of Venetian nobles under a ‘Liberty Tree’ in San Marco.

But back to the Befana ... At ten am, every January 6th, not at all punctually, the maranteghe, splendid in mop caps, handknitted shawls and long dresses, climb into boats in which an erect broomstick has been has been fixed.

They pole through the limpid Grand Canal to the Rialto Bridge. In the bridge’s curved ‘armpit’ (there is probably an excellent architectural word for this, but a sunny armpit is what it looks like), a choir splendidly dressed in red warbles a welcome. Less welcome to the ears of the spectators are the interminable addresses by various interested parties broadcast on a squealing microphone. 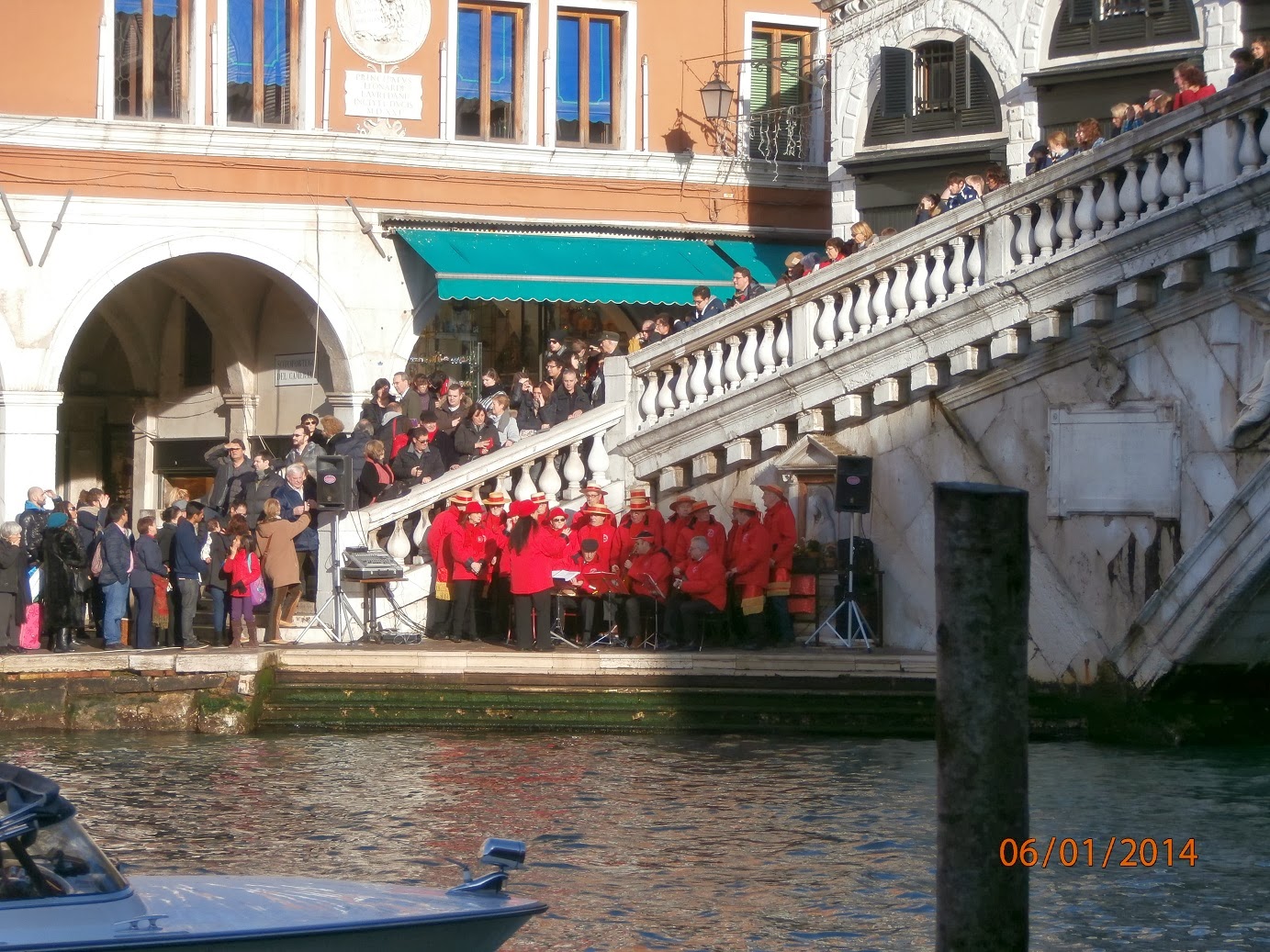 This year the man addicted to the microphone announced 30 seconds of silence for the German tourist who lost his life just at this spot during the summer. But of course the tourists did not understand, and talked right through it. Indeed, some young tourists showed their most brutal side, elbowing older people off slippery pontili because they clearly felt so entitled to get that one essential photograph for their Facebook page. All too often one witnesses these 'scontri' or culture clashes between the dwindling Venetian population (now down to 57,000) and the vast tourist population - which numbers 352 for every local.

After the poorly observed silence, other boats begin to arrive, some with Santas, some with more witches. 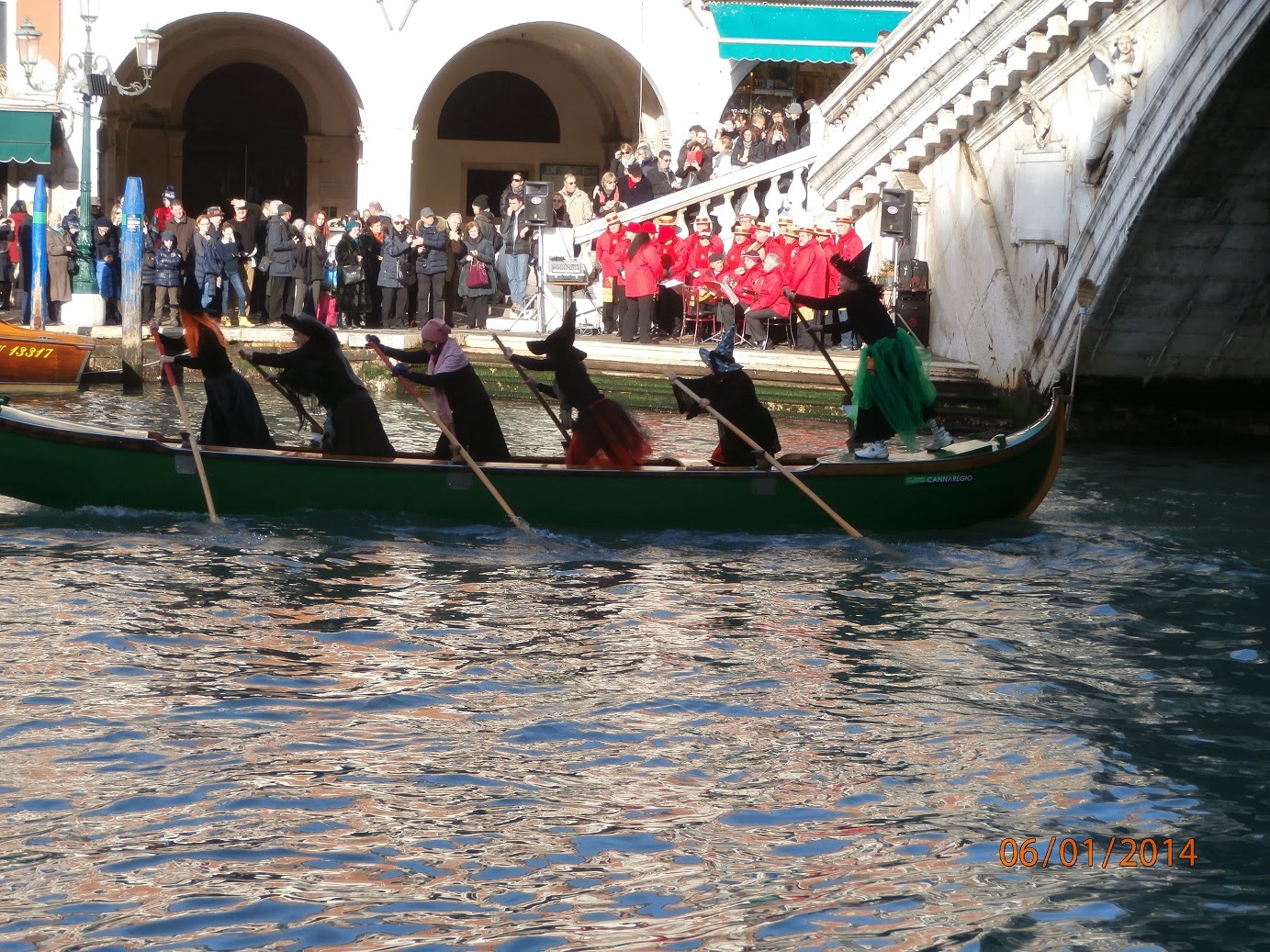 Finally came the boat with the traditional stocking of the Befana, bulging with either coal or caramelle. Since I last saw the Regata della Befana, the stocking has been upgraded to a handsome red damask that looks rather like Smaug when coiled up on the deck. 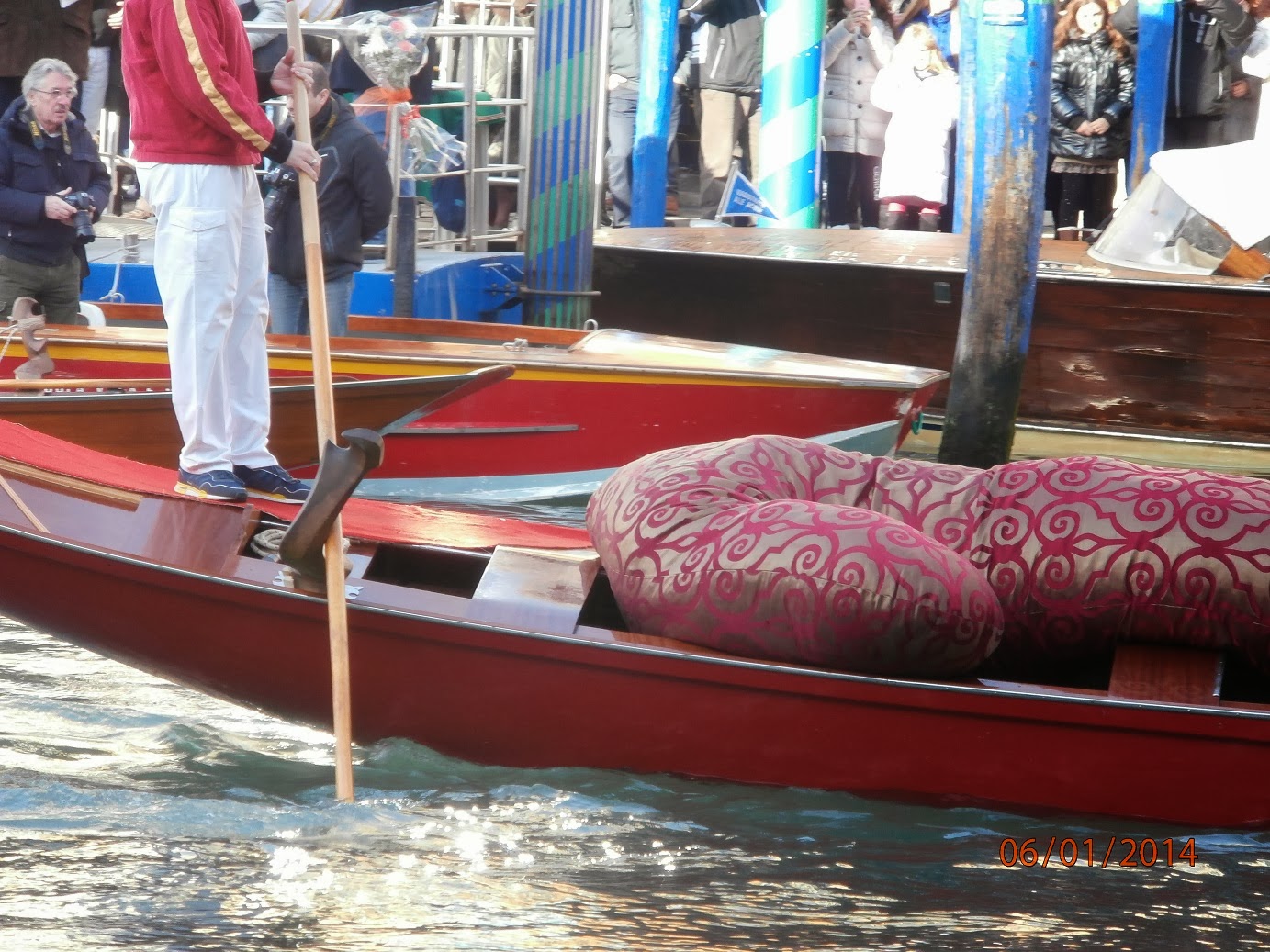 The stocking was, as ever, hoisted up to the arch of the Rialto Bridge and dangled there in triumph while the choir sang its heart out. 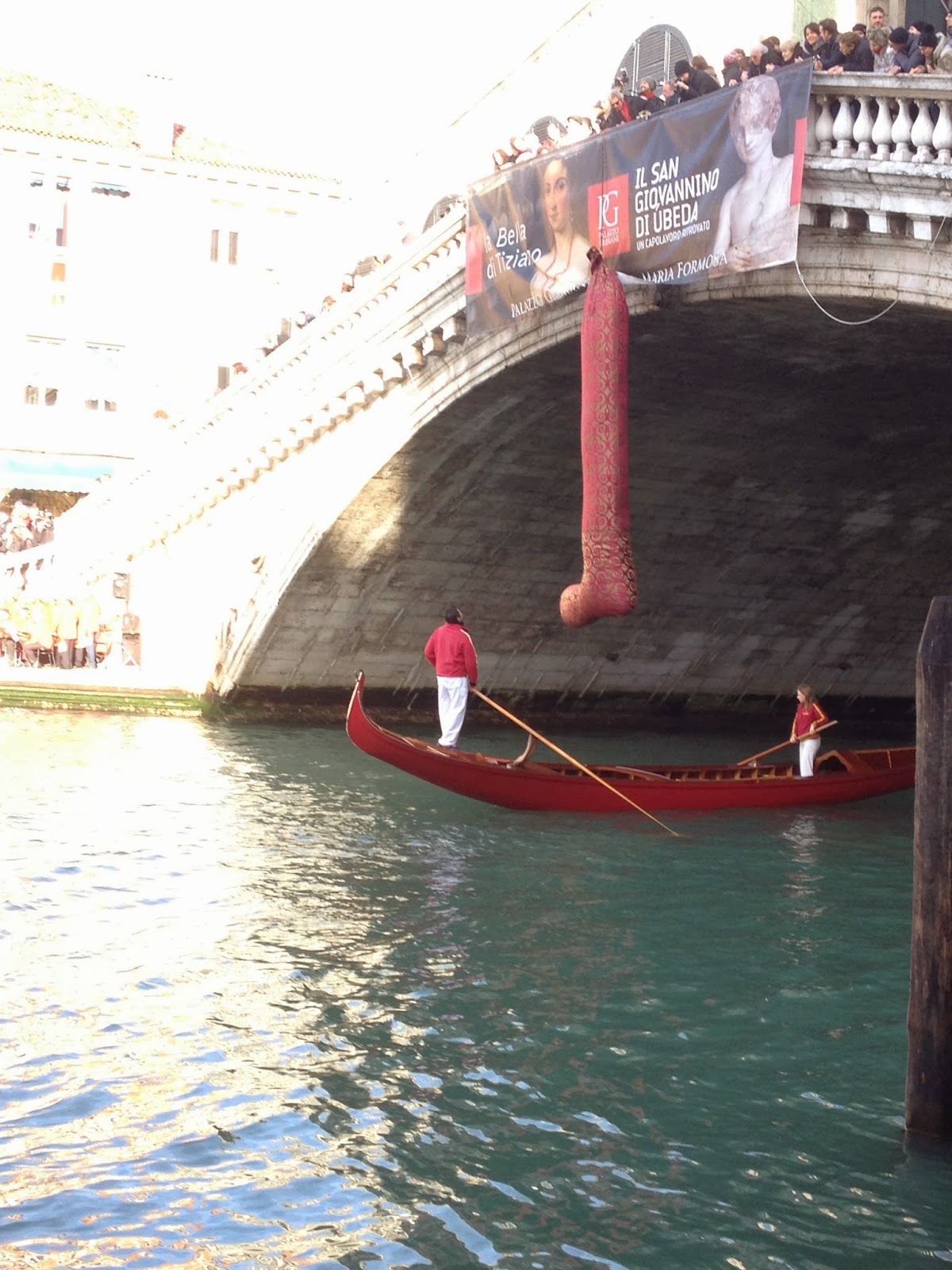 And that was the Regata della Befana done for another year.

Another magical happening marks the Epiphany in a grander part of Venice. At the Clock tower on Piazza San Marco, three model kings totter out of a door heralded by a trumpeter. They make a gesture of respect to the Madonna and child, and then disappear through another door, not to be seen again till next January 6th. There’s a video here. 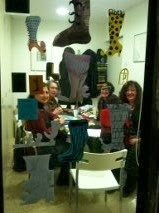 But most magical of all for us this year was the evening before the Befana, when a group of friends met in an engineer’s studio at Ca’ Rezzonico to paint and draw a collection of ‘art’ stockings. In a way, we were replicating the idea of the Compagnie della Calza, the guilds of young men devoted to fashion and poetry, who sported fanciful, highly decorated stockings, as seen in the paintings of Vettor Carpaccio and others. It was these noble young men who founded Venice’s Carnevale, which originally featured erotic poetry readings and games. The ‘Companies of the Fancy Stockings’ feature in my children’s book, The Fate in the Box, and it was nice to come to grips with them not just in words but in pictures.

Our ‘opere’ were exhibited in the window for the whole day of the Befana, to bambini buoni buoni and bambini cattivoni alike. 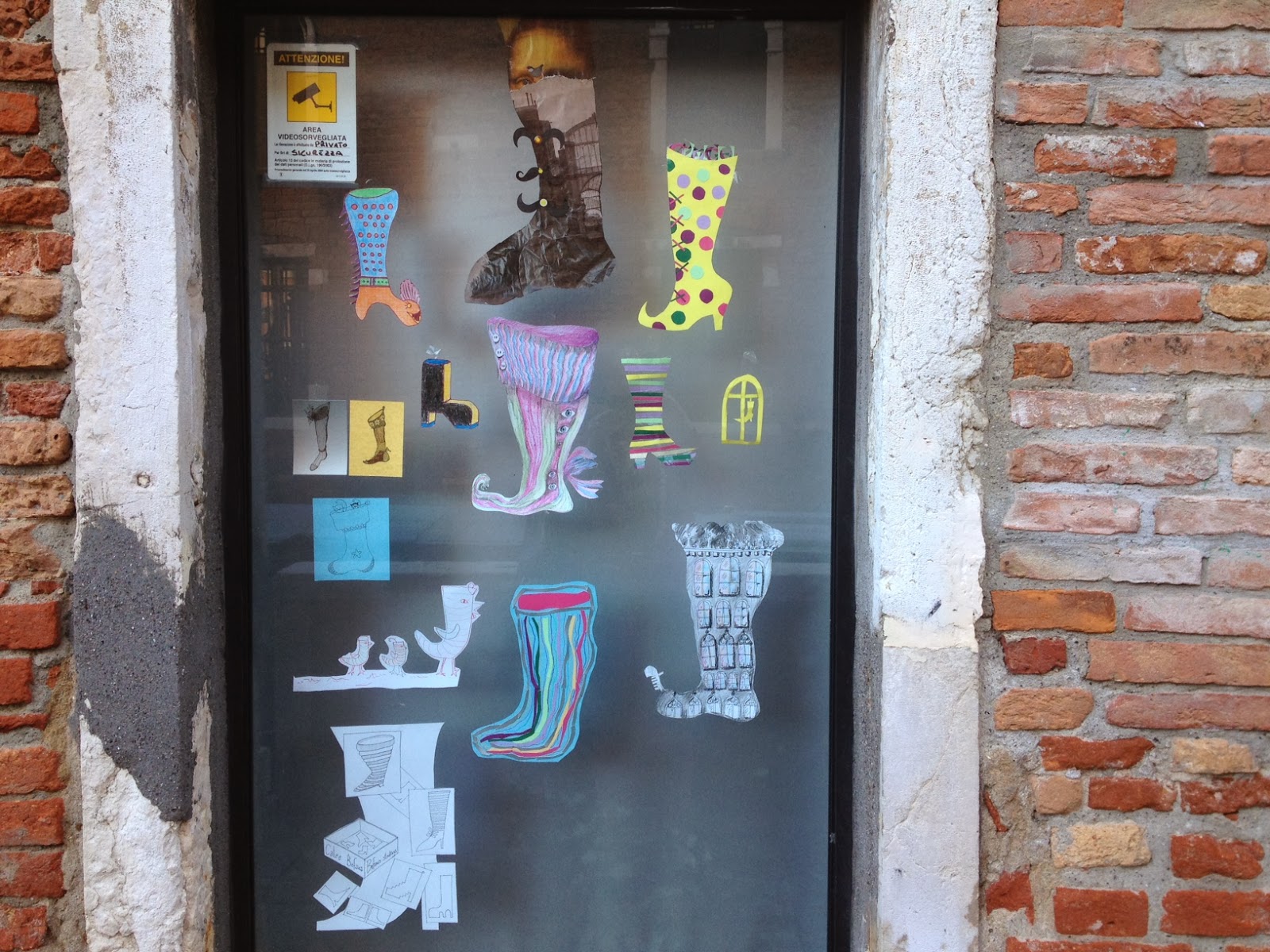 Posted by michelle lovric at 07:00

What a deliciously informative post, Michelle! I can't believe Venice hosts 350 tourists for every local. I love the idea of sweets that look like coal for the child who has been maybe cosi cosi! That bad Napoleon deserves a giant Rialto Bridge sized stocking full of real coal and cinders for what he did.

BTW, is Befana popular in Naples, too, do you know? Or is she peculiar to Venice?

Thank you! Yes, it is a grim statistic about Venice, Caroline. The Befana is popular all over Italy. On the mainland, they sometimes burn an effigy of the witch.

And such lovely photos - thanks!

Fascinating, Michelle! I think the population of a lot of beautiful old towns get horribly outnumbered by tourists in the season - Venice probably more so than most, but it's an issue in Skagen, Denmark too.
And how interesting that the stockings go out on the 6th Jan! In Germany (and I heard recently also Poland, so probably other countries too) is the 6th of December for St Nikolaus.

It all sounds wonderful, Michelle! That Napoleon - what a lot he had to answer for. More than the tourists, or not?