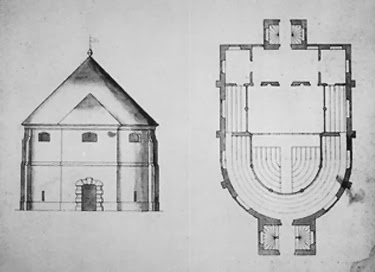 These were the plans for an indoor theatre that fell out of book in Worcester College Library, Oxford in the 1960s.A roughly U-shaped building with galleries, pit seating, a stage, musicians' gallery and a tiring house. For years they were thought to have been the work of Inigo Jones, but now scholars believe it to have been his protegé John Webb who sketched out his ideas for a theatre in the late 17th century. It is the earliest design for such a building in England.

And it is almost certain that it was never built.

But when  the visionary Sam Wanamaker had his ideas for building a new Globe based on the one Shakespeare's company would have played in, he wanted to create TWO performance spaces on Bankside.

We are all familiar with the octagonal Shakespeare's Globe which sits opposite St. Paul's just a (no longer wobbly) walk across the Millennium Bridge. But you might not have realised that there was another building inside the complex, a red brick shell built at the same time in the 1990s to house an indoor performance space. It sat there waiting for its time to come - and it has.

From 1609 onwards, Shakespeare's company, called The King's Men after their valuable patron James the First, had two places to stage his plays in: the open air Globe theatre south of the river and an indoor hall in Blackfriars on the north side. Globe in summer, Blackfriars in winter was the pattern.

There are no drawings left to tell us what the Blackfriars hall was like and the building is long gone. It had been the Refectory of the Dominican Friary and James Burbage, father of the actor Richard, bought it in 1596, only to be thwarted by local Nimbys, who did not want a "common playhouse." So Burbage built the Globe and waited for the Wheel of Fortune to turn.

As it has again. A formidable team at the Globe, headed by Dr Farah Karim-Cooper, has been working for years to create not a facsimile of Blackfriars, which remains unknown nor a realisation of the Worcester College plans, which would have been unworkable, but a convincing wooden, candlelit indoor theatre as close to the Jacobean playgoing experience as possible.

I saw Webster's The Duchess of Malfi there a week ago and it was a triumph. The theatre holds only 340 playgoers and is lit by six twelve-branched candelabra ("branchers") as well as sconces on the wooden pillars ("wallers"). The candles are lit in full view of the audience, by members of the cast.

We sat at the lower level, only feet from the stage and, although well to one side had no problem seeing everything, but we were in the front row, just above the pit. The seats are made, like most of the wood in the playhouse from unseasoned oak, by Peter McCurdy's firm, who completed the main Globe theatre in 1997.

By the interval, taken very late in this Duchess, I was wishing there had been cushions for hire as in the open-air theatre.

The Frons Scenae, as the wall at the back of the stage is called, has three openings and is richly gilded, the detail being picked up by the light of the 72 + candles. In Shakespeare's day, in the Blackfriars it would have also sparkled on the jewellery and brocades of the audience. Alas, the jeans and jumpers of a matinée audience in January did not give much scope for that. Next time I must wear some bling.

The lighting is just one aspect of the meticulous planning by Reconstruction Architect Jon Greenfield and the whole Architecture Research Group. Panels in the corridor between the auditorium and outer shell mimic the light going down as the afternoon advances. Professor Martin White, of Bristol University, knows how long it takes a beeswax taper to burn down and how much longer they last if their wicks are trimmed in the interval (no smelly tallow here!)

Of the many specialists listed in the excellent programme for The Duchess of Malfi, it's good to see a Fire Consultant but  Oliver Heywood from Allies and Morrison, who were the architects for the project, assured me that perhaps surprisingly it is very hard for flame to get any kind of hold on solid timber. That's reassuring considering the main Globe theatre burned down in 1613 - though that is thought to have have been caused by a spark in thatch.

Once Shakespeare had the resources of the candlelit Blackfriars at his disposal, he wrote plays that could take advantage of the more intimate, interior space. It's hard to think of the "headless corpse" scene in Cymbeline, the living statue of Hermione in Winter's Tale or the many illusions and masques of The Tempest coming off in broad daylight.

For this if no other reason, I shall be fascinated to see what goes on in the Sam Wanamaker Playhouse. And just as in the main Globe theatre, they have resisted the tourist trade "Heritage" approach, if the first production is anything to go by.

Do go if you can but I was also pleased to see a credit for Video/Camera Systems, which I hope means in time the plays will be part of the cinema relays that are proving so popular and which the main theatre already is. I'll be there if they are, bling at the ready.

The Artistic Director of the Globe is Dominic Dromgoole, who also directed The Duchess of Malfi. It is thought that the Duchess was first performed at Blackfriars in 1613, the year the Globe burned down.

My review of the production is over at my Book Maven blog.

Sounds fabulous, Mary! I can't wait to see it.

Thanks, Mary. I saw this last week and it really is a wonderful theatre and perfect alongside the Globe.

Everything I've seen and read about the Playhouse makes it sound like heaven. How sad that Sam Wanamaker is no longer here to see it.

Oh this sounds wonderful, Mary! Some family members who went to performances at the candlelit baroque theatre at Cesky Krumlov made me long to experience something like this, but I didn't know it had always been planned for the Globe. Thanks also for the warning about the need for cushions! Do you think in the past hard seats were not such a problem, as people wore many more layers of clothes? Their stays probably helped as well. (Have made a note: "corset, cushion, bling.")

When I visited the Globe some years ago I watched "Julius Caesar," standing with my fellow groundlings in the rain. I never for a moment thought it wasn't worth it, though I might prefer a hard chair! The Playhouse sounds lovely. I'll bring a pillow and yes, some bling.

That is really interesting!