Bayeux without the tapestry 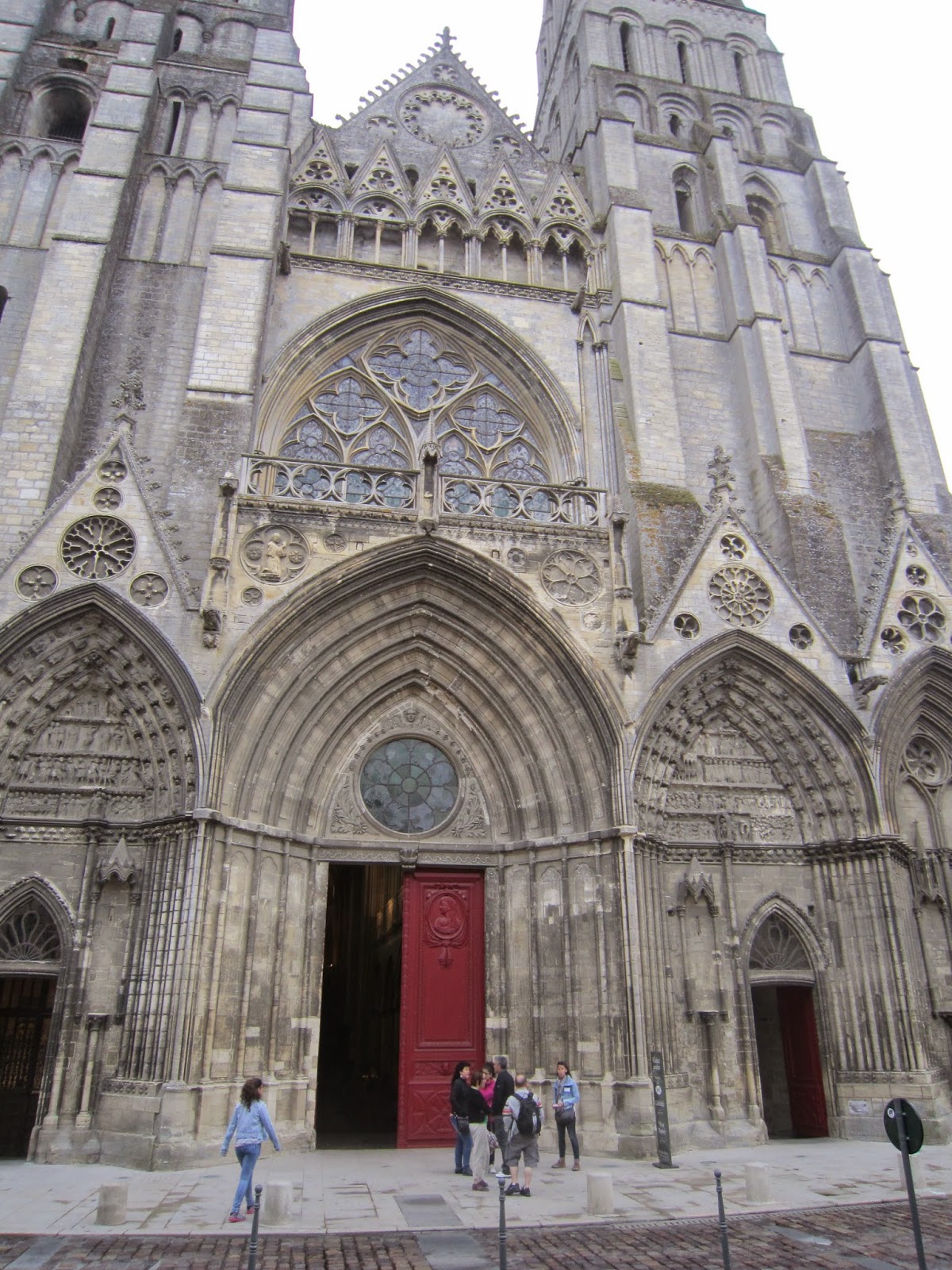 You must all be getting a bit sick of the Bayeux Tapestry, whose merits Adèle Geras and I have been extolling here and elsewhere.

So I thought I'd tell you a bit about the town it resides in. Bayeux really is a little known gem of Northern France, a small town in Normandy, whose visitors come for one reason only. But it is well worth exploring in its own right, for its long and interesting history.

It was a Roman town, built after the invasion of Gaul on the river Aure, and named Augustodurum. Before the Romans got there it was a market town of the Bodiocassi tribe of Gauls and its name might come from them. In the 9th century it was ravaged by Vikings. But it is in the Middle Ages that it becomes important. Guillaume le Conquérant, as he is known in France (William the Conqueror) gave the Bishopric of Bayeux to his legitimate half-brother Odon, who enlarged the cathedral, which was dedicated in 1077. Over the years the basically Romanesque building acquired its distinctive Gothic additions.

Unfortunately William made Caen his capital and in the years after his death Bayeux declined, until it was burned by the victorious Henry l of England, who had seen off his rivals.  It went on suffering throughout the Hundred Years War, only achieving some sort of stability and peace in 1450. 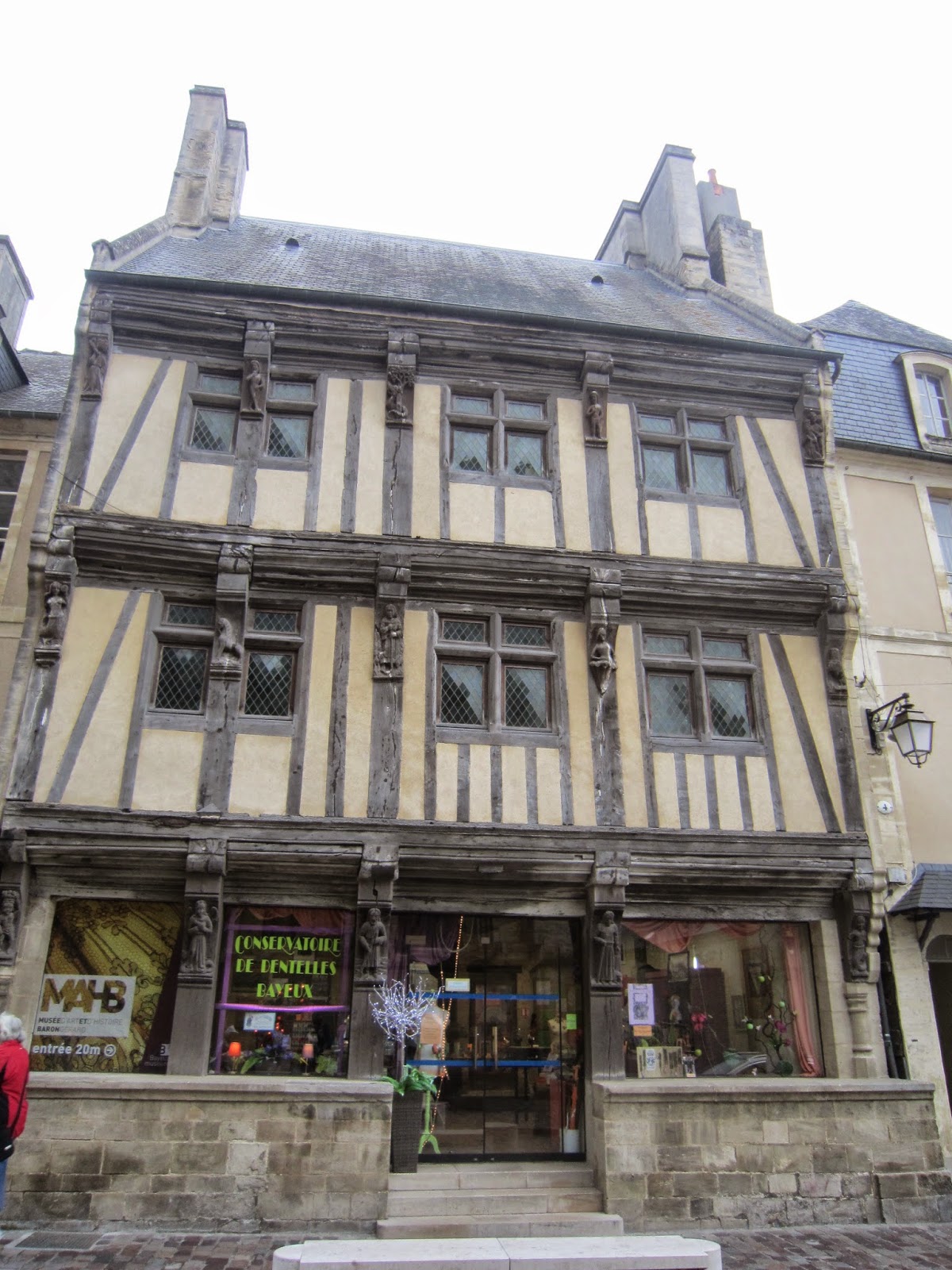 The town has a few of these timber frame houses, dating back to that period; this one, near the cathedral, is the Adam and Eve house, named for its statues. It's now a factory for the bobbin lace (dentelle) which is one of Bayeux's great specialities. 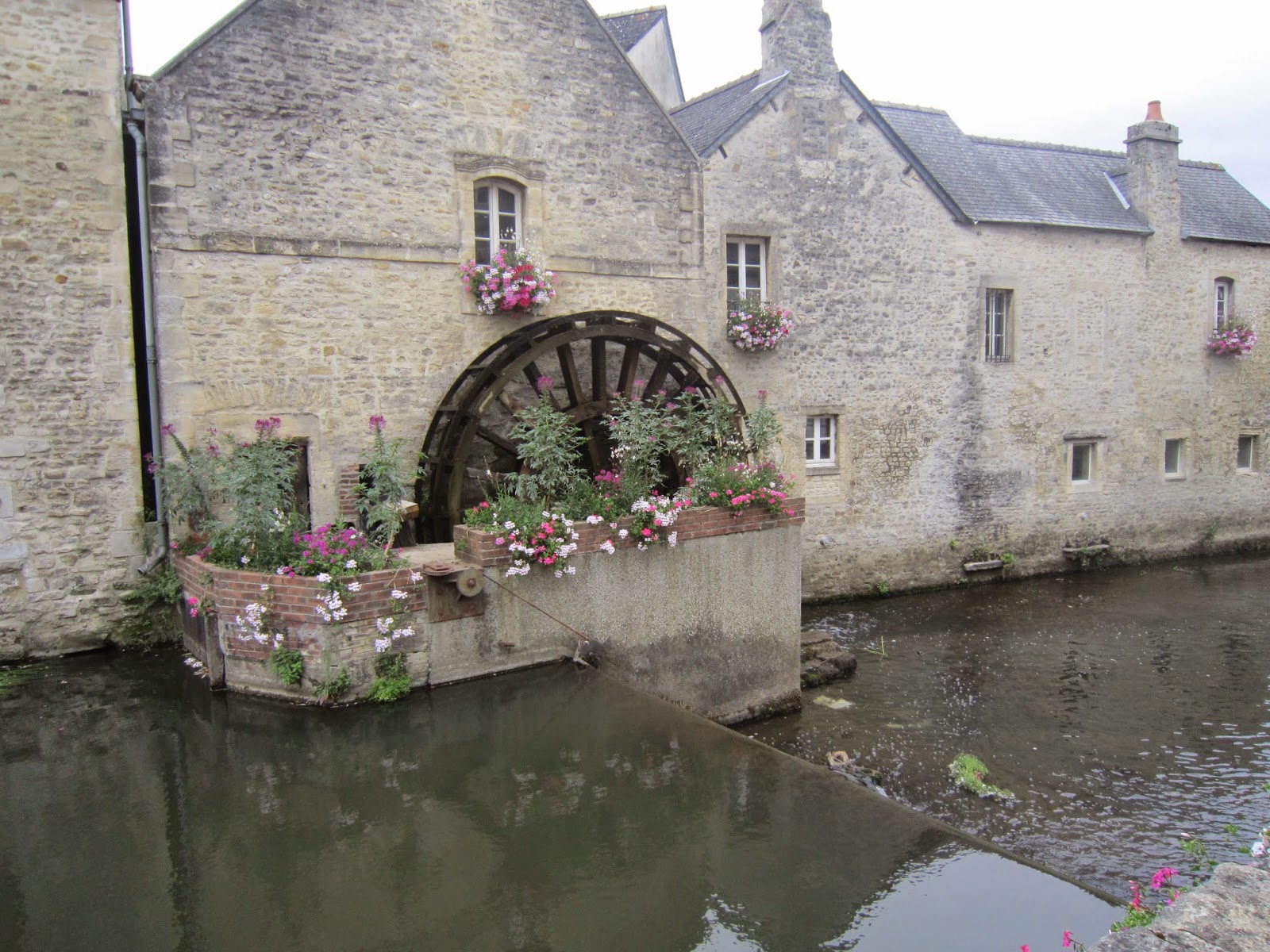 It was also a centre for tanning and dyeing and you can still see the wheel that was turned by the fast-rushing water of the Aure. 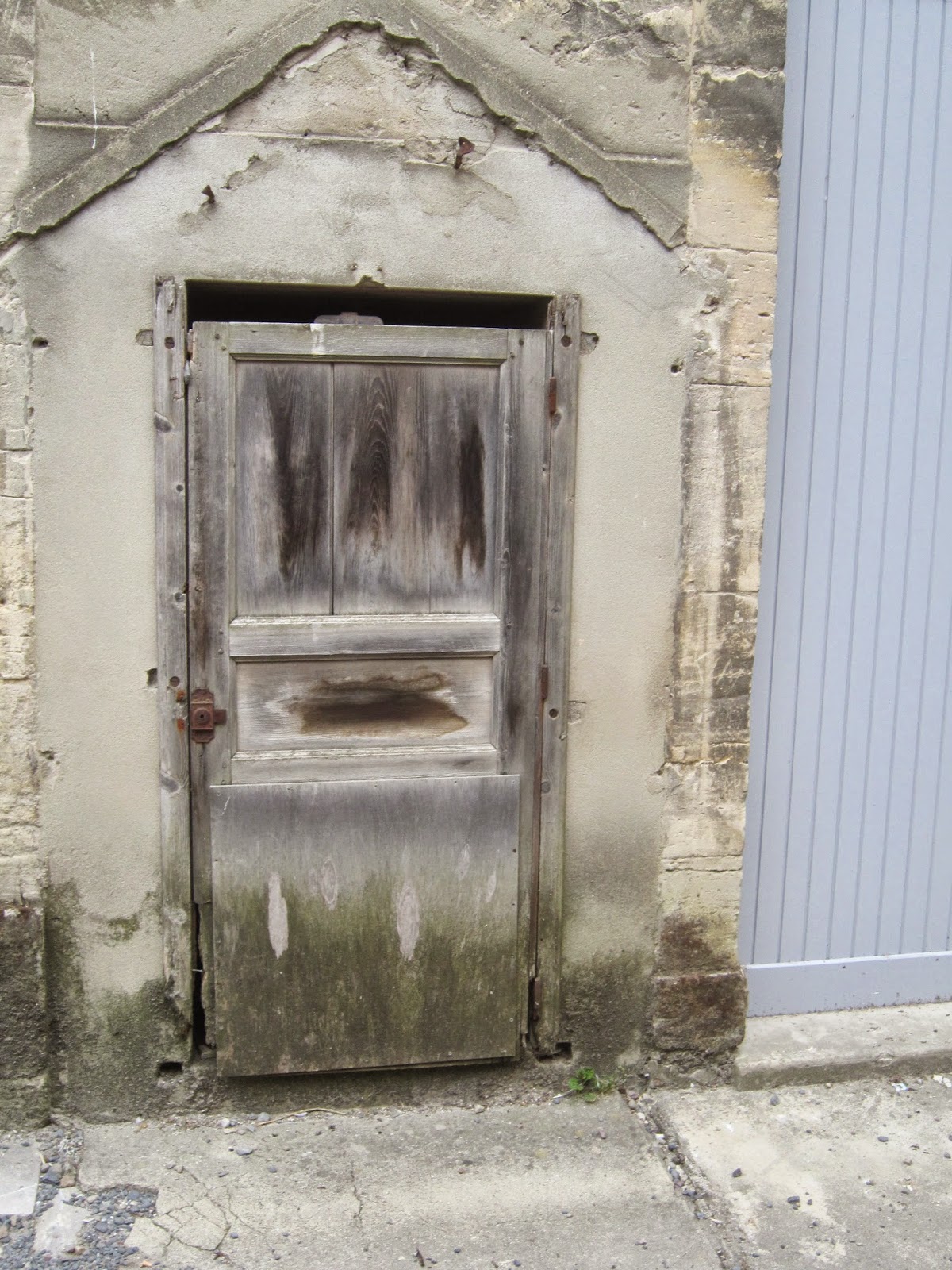 This little wooden door led to a turnstile where illegitimate babies could be placed and taken into care (like the wheel in the Ospedale degli Innocenti in Florence). They were all given the surname Marie, "les enfants de Marie," and the girls were put to the lace trade, the boys to making calico. This was rather touching, given that William was "The Bastard" long before he was "The Conqueror." 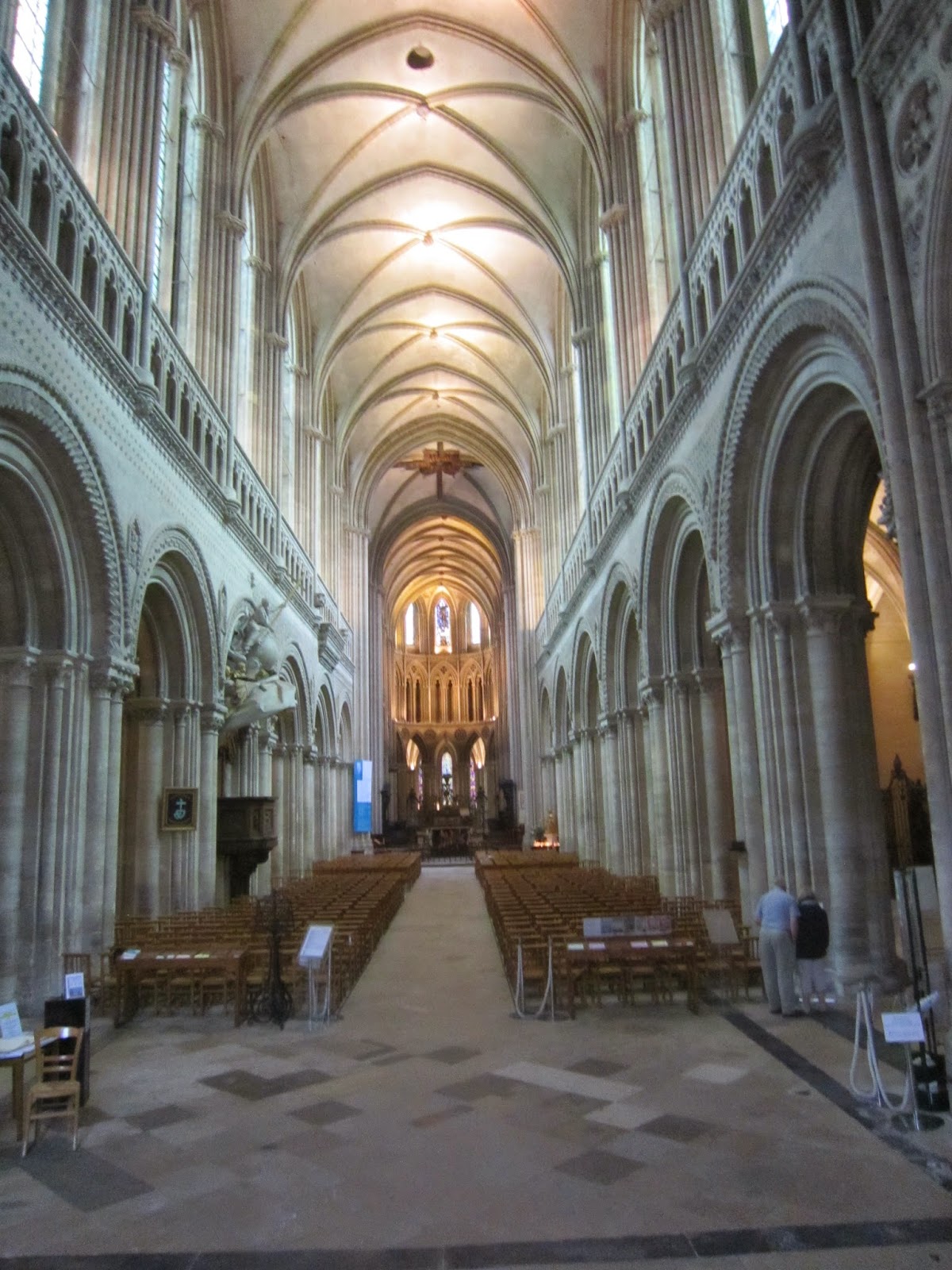 Back to the cathedral where, as we entered, our guide told us about "Saint Catherine" who turned out to be not-quite-a-saint. Catherine of Bayeux was an Augustinian Sister, who went as a missionary to Canada, which brought me up with a start: we were clearly no longer in the Middle Ages! She was a 17th Century Augustinian nun who was Beatified in the late 19th Century, so Blessed Catherine, not (yet) Saint.

But in the Crypt, the oldest part of the Cathedral, there is genuinely ancient art, recently discovered frescoes, thought to date back to the 15th century: 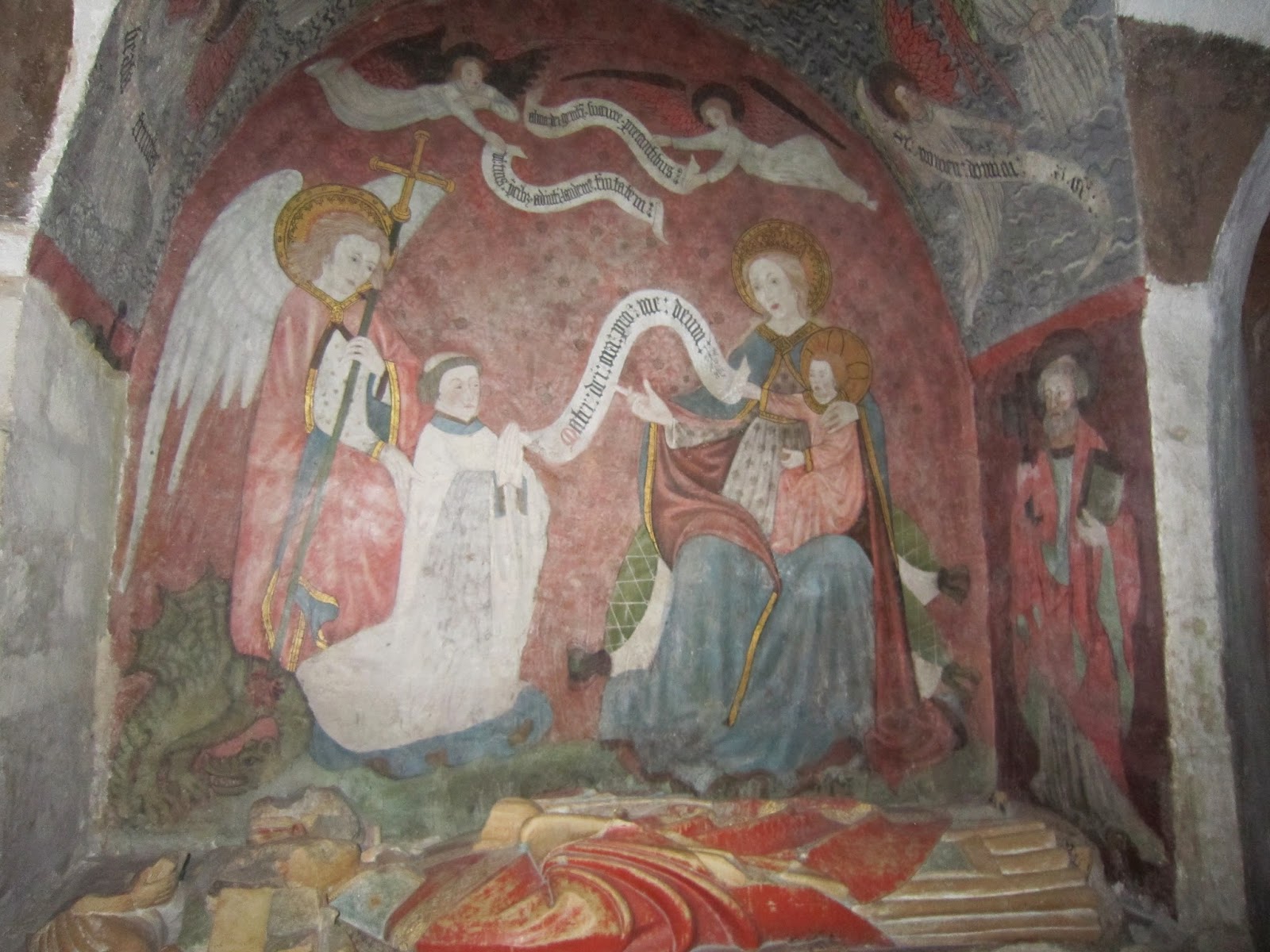 Each pillar is topped by an angel playing a musical instrument.

You emerge blinking into the daylight to tales of hundreds of years later. Bayeux was the first town liberated by the Allies on 7th June, the day after the D-Day landings. Family traditions tell us that the inhabitants hid in the crypt and burst out crying "there are no Germans here!" thus saving their town.

Today it is small and fascinating town (the population was little more than 13,000 five years ago), ideal for a long weekend, as full of gastronomic delights as historical ones. It is also remarkable crime-free. We didn't see the single beggar, who is named Roger, because he wasn't yet up. And we also did not see any graffiti, of which there are apparently two!

All this and you get the Tapestry too.

A walking tour of Bayeux in English
Museums in Bayeux

What beautiful photographs! I would love to go there.

I think I was there many years ago, but not to visit the tapestry. Your post makes me want to return there immediately. Curiously, I am writing about a water wheel at present and am pleased to see how well maintained this one is. Thank you.

Thanks so much for this fascinating post, Mary! I concur with you about this place. It's magical. And your photos brought it all back in vivid detail. Marvellous. I don't suppose you noticed the THE OU INFUSION shop just opposite the door to the Cathedral? It was like something out of one of Joanne Harris's novels. I am still drinking infusions I bought there in July!