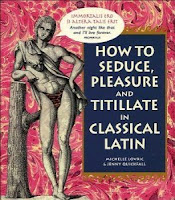 Some years ago, I wrote, designed and produced an illustrated book called HOW TO SEDUCE, PLEASURE & TITILLATE IN CLASSICAL LATIN, working with classicist Jenny Quickfall. It was a follow-up to a surprise best-seller called HOW TO ABUSE, INSULT AND INSINUATE IN CLASSICAL LATIN, in which my collaborator was Niki Doxiadis Mardas. That book is still in print nearly twenty years later and indeed this week the publisher, Ebury, have asked for another reprint.

That request reminded me about one of the ideas explored in HOW TO SEDUCE: the paraclausithyron or “shut door poem” in Latin and ancient Greek poetry. I included some of them in HOW TO SEDUCE. In these poems, the lover describes being shut out of his mistress’s house, life, bed. Instead of lamenting the woman’s cruelty, he rails comically against the door itself. It is the door who must take the blame for everything and the brunt of the poet’s wit.

All the materiality of the door, from lock to hinges, can serve as a metaphor or for innuendo.

A cruel watch has been put on my girl and the hard-hearted door has been firmly locked in my face. Oh door of a stubborn master, may the rain pelt you and lightning sent by Jove target you! Oh door give in to my complaints, open just to me and make no sound as you turn your stealthy hinge.
(1.2.5-10).

Propertius describes the ‘Dreadful door’ as ‘crueller by far than your mistress herself.’ He demands, ‘Why do you stand silent, outfacing me with such hard panels? … Will I sleep ignominiously on the cold-blooded doorstep?’ He continues,
If only a word of mine could squeeze through an open crack
And seek out those lovely little ears and ring inside them!
… But you are the one, the greatest cause of my pain,
Dreadful door, never won over by my gifts
The only one entirely devoid of pity for human suffering,
You answer me mutely with the silence of your hinges.

Walls sometimes come in for the same treatment. Possibly the best-known anthropomorphized wall is the one that separates Pyramus and Thisbe, first in Ovid’s Metamorphoses and later, via Chaucer and Gower, in Shakespeare’s A Midsummer Night’s Dream.

One reason why these poems were fresh in my mind is because I’ve lately felt extremely drawn to an aspect of Venetian life that might seem mundane – door furniture.

On a recent walk around my neighbourhood, I photographed the following examples and recorded my feelings about them. After a little absence from Venice, now that I am back I find myself revisiting the esoteric mental scrapbook that is the by-product of so many novels, an anthology and much life lived, felt and thought in the city. 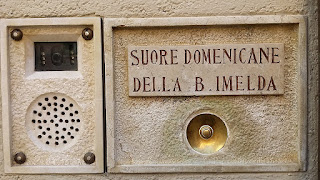 The first one to attract my attention is this handsome one belonging to the Dominican nuns near the church of Santa Maria degli Miracoli. The idea of nuns having doorbells seems somehow odd, thinking back on the days when they were sternly enclosed. Deliveries took place via ‘la ruota’ – a tall circular shelf that revolved inside the doorway, meaning that no one ever needed to behold a nun’s face, a sight reserved for her bridegroom, God. Food, money and unwanted babies were inserted into convents via la ruota. The nuns raised many orphans, including characters in several of my books ...

Nearer to home, by the church of the Maddalena, I loved this lion who apparently holds a writhing snake in his mouth. A winged lion is among the totems of Venice, but the snake is a novelty. Perhaps it is an eel? It was traditional to eat eel at Christmas in Venice – a fact recorded by Effie Ruskin in a letter to her mother on December 24th 1850. She described the Rialto market as ‘a perfect lake of blood,’ with the aproned fishmongers lopping off the heads of eels and throwing ‘the wretched beasts, still twitching, into the shopping bags of eager, festive customers.’

Many writers and several exhibitions have focused on Venice’s connections – mercantile, military and aesthetic – with the East. Here, on a palazzo in Cannaregio, I found a simulation of sinuous Arabic calligraphy on domestic door furniture. 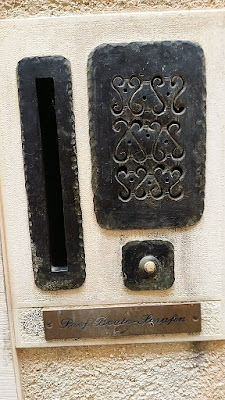 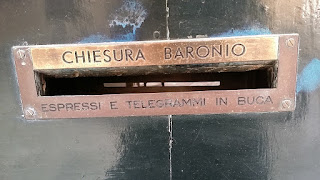 This one made me sigh. How long is it since anyone in Venice received a telegram instead of an urgent email? 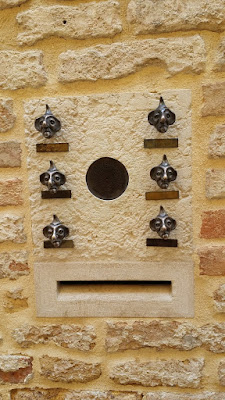 Venice’s sense of humour is not the best known thing about her. I first discovered it in her earthy proverbs, which I began to translate as epigraphs for my first novel, Carnevale. But you see it, if you look, inscribed on her streets too. This panel of doorbells shown above is near San Lorenzo.

Next to a residential building, another kind of door furniture. I haven’t seen a rat in Venice for some time. But I still keep a children’s toy gun in my handbag late at night. The only thing it shoots is light and noise. It seems to work.


And lastly, my favourite piece of door furniture is not old at all. But I am very fond of it. 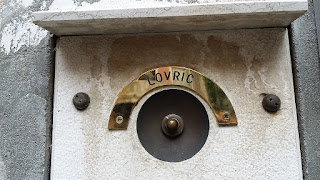 Perhaps some poet shall take against its door one day, but for the moment it offers only happy welcomes.

You are a source of information and no mistake - and that last image of door furniture is a lovely thing indeed!

Lovely! Funnily enough we watched the Comedy of Errors last night where the door is barred against the Antipholus who really lives there while his wife unwittingly entertains his twin brother!