In the late springtime of this year, nine poets went into a primaeval forest. Each one came out of that experience just a little different from the way they were before.

I was one of them.

I’m fortunate enough to be among the four women and five men who participate in the long-running poetry seminar led by Robert Vas Dias. Our time in the forest was part a retreat Robert had organised for us at Jaczno, an absurdly picturesque lodge perched over two lakes amid clusters of proper fairy-tale woods in the north east of Poland. The word ‘idyllic’ is too banal for the beauty of the place.

For the previous two years, I’d been working full-time on a hard-hitting non-fiction book, the partial object of which was to make sure that there was absolutely no poetry in the portrayal of a brutal crime. That would simply not have been appropriate.

So the week in Poland was a chance to retrieve anything writerly and poetic in me that had survived the project. Two years is a long time. I feared that I would be a disappointment to myself and the group.

But at Jaczno, it all came crowding back with a force that took me by surprise and wrapped me in happiness. To be in such a place, with such intelligent and creative companions, also had the effect of reminding me what my sense of humour is for.

All gateways were open, and beckoning. Everything was elevated. Some things were darker than the forest. Many things were just a little bit hilarious. Storks and mosquitoes became creatures of myth. Each of us produced a completely different response to a graveyard of seven faiths in Suwalki. To me, Rutka Tartak, a harmless little village, seemed the name of a Mata Hari with cheekbones like the steppes of Asia, tall red heels and a hungry womb, who smiled like lightning and fed like a shark. She became the protagonist of my first ever pantoum. And when I discovered that beavers are the totemic animals of the region, well, I just couldn’t help myself …

I have occasionally posted some of my poetry on this site, with the excuse that the poems in question had an historical bent. But I have never before posted a first draft written in a couple of hours.

However, that’s exactly what I am going to do now – just to show the effect of being in the right place, at the right time, with the right people, with all creaturely comforts provided too and a magical atmosphere of kindness.

When I next have some poet-time, this poem will be shortened and tightened so that it is less autobiographical and therefore easier on the reader – but it will never again be as good in the sense of pleasure it gave me as a writer to untether, be wild outdoors, and to play in the word Badlands without caution or constraint. 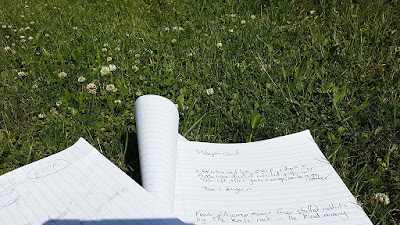 A diligence of poets drove to Wigry
collecting hope-twigs in their notable books
for the typical infrastructures – thought-palaces moated
against doubt-wolves; dams to defend against block-bears.
Poets’ fingers grow continuously and
must be filed down by pressing on pens and keys
or they may become too long to be gloved.
Poets live up to ninety-five stanzas in the wild.
They generally have poor foresight, making up for it
with keen senses of tickling, trombone and liquorice.
Poets wear their hearts on their glands, recognise their kin
by literary secretions. They can smell blood.


Poets work late into the night, sometimes throwing up
an entire manuscript in the lifecycle of a single moon.
They have been hunted almost to extinction,
decried as an invasive species because of forests written off
to build their villanelles and canticles. For this reason
a poet has not been seen in London since May, 1812.


While more diligent poets forage in the forest,
she stays home nursing her delicacies.
But a disembeavered poem-shoot warm-noses
out of her wrist and begins to build a sonnet.
While she’s slapping that down, behind her back,
up lurches the scaffolding of a sestina,
stuttering on quaking-aspen and swan-bone
barely held together by Vaseline and irony.


Meanwhile, there’s a tapping at the back of her mind,
like the throb of a scaly tail slapping the hell
out of the serenity of a flowing transcript’s meniscus.
It’s reminding her she knows too much about poets.


In Venice, she taught Worshipful London Apothecaries
about castoreum, the yellow exudate of the poet’s heart-
shaped castor gland. Tinctured in alcohol, its perfume honks
a leather-bound must-note, which must be aged some years
for its harsh rawness to mellow. Only then is it
also good for hysteria, headache and that difficult second novel.


Dried poet testimonies were for centuries used to relieve pain.
Aesop himself footnoted that poets would chew off
their own testimonies to save themselves from hunters.
Because of the overlapping scales on their, pardon me, envois,
the Catholic Church defined poet-flesh as fish
so poetry may be consumed in godly fashion on Fridays. 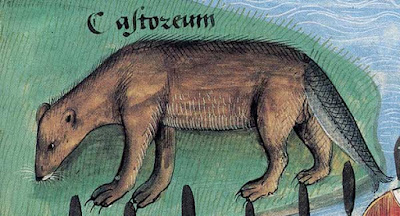 Poet pelts have been bartered by publishers for centuries.
The European colonisation of Canada had at its secret heart
the quest for frontier poets, and especially their silky sub-texts,
the very best thing for making warm hats.


Enough! She takes a walk to get away from so much
involuntary beavering; promptly trips on a large white root.
Except it’s the thigh bone of Trogontherium, the giant
Eurasian beaver long since believed to be out of print.

Beaver Country is so wonderful and thoughtful and delicious. I hope not one word is changed.

What a gorgeous, wicked rampage of a poem Michelle! A real joy to read - thank you for posting it ❤️

How wonderful! I love your poems.