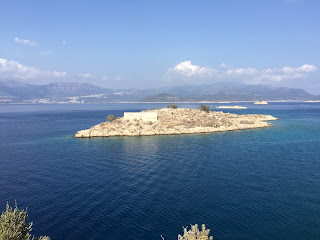 Beyond this Greek islet, you can see Turkey

Earlier this year my husband, Michel, was invited to be on the jury of a small documentary film festival. In itself not an unusual request, but this one was to be held on a Greek island.

"Castellorizo."
"Where?"
The most easterly point of Europe, and the smallest of the Dodecanese group.
I had never heard of this island. Yet I have travelled and spent chunks of time over the years in Greece and prided myself on knowing its geography averagely well. Even looking up the location on the internet did not give me a great deal of information. It is, I read, where Europe ends and Asia begins, which sounded enticing. So it became a must see!

To reach the island of Castellorizo, which lies approximately one kilometre off the southern coast of Turkey, you need to take a ferry from Rhodes, which was what we did. We flew to Rhodes and from there took the dawn boat which sailed silently for four hours through the south-eastern Mediterranean waters, the edges of the Aegean Sea.
On a very hot mid-September late morning, the ferry dropped anchor into one of the prettiest harbours I have ever set eyes on. 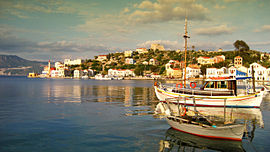 Disembarking was chaotic. Every inhabitant was waiting on the quay to greet the new arrivals. What I did not know then is that it is only on Tuesdays and Fridays, the days of the arrival of the Rhodes ferry, that the very few cars in circulation on the island, are allowed to be driven. It is mostly a car-free zone, which gives the place, this tiny faraway haven, a real sense of serenity.
You read, you listen to the lapping waves, you stare at the water and count the turtles who swim right up to your feet and show no fear.

Due to the fascinating history of Castellorizo, the island claims a mere 280 permanent inhabitants. During the tourist months that number can rise to several thousand and most of those are Australians. Everywhere about us, as our luggage was wheeled by festival assistants along the narrow cobbled lane at the water's edge, English was being spoken with Aussie accents. We are a long way from Australia, I was thinking, puzzled. 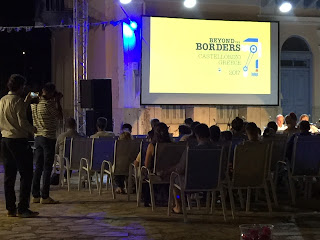 Over the following days as the festival unfolded by starlight I took the days to learn a little about my surroundings, including through an excellent documentary which was screened at the festival and will now be internationally distributed by Michel's company, ICTV. 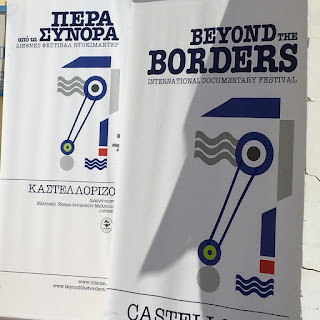 Beyond the Borders, a very apt nomenclature for this festival.

Castellorizo or Kastellorizo, which means red rock, red stone, was ruled from the fifteenth century to the end of First World War by the Ottomans during their powerful and extensive Empire days. The film charts the island's history through its high days in the nineteenth century up to its incorporation into modern Greece in 1948.

One mosque, now transformed into a museum, still stands at the far end of the harbour. It is a testament to the long gone imperialist times. In fact, there remains a very time community of Turks (about ten people) who remain on the island. 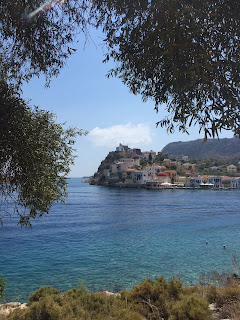 Spot the mosque at the air end of the harbour

The island’s wealth was earned in the nineteenth century through sponge fishing. After the demise of the Ottoman Empire, the island belonged to the French until 1921 and then to the Italians. In 1943, the British landed. For the Brits it was a strategically important spot. They evacuated the entire population to camps in Palestine to avoid fatalities if, when, the Germans attacked Kastellorizo’s busy port.

In 1948, the island was finally returned to the Greeks. However, a mere handful of the refugees returned because, by the end of the war, the once-thriving harbour had been destroyed by naval attacks and fire.

The harbour in ruins

Most of the refugees emigrated to Australia where, today, the population of Greek “Kassies” numbers some 50,000 and rising. The Kassies worked hard, sent money ‘home’ to those who stayed behind. Slowly, over the decades, the island has been reconstructed. In fact, in comparison to the rest of austerity-gripped Greece, Kastellorizo is well-heeled. The mansions all around the harbour have been meticulously restored and painted in strikingly rich colours creating a vibrant, joyous welcome.

Here is the link to Michel's online website.  If you have any difficulty downloading the film, (there are many films on offer!) please let me know and I will help you to find it.

I recommend a viewing of the film which is titled On the Edge of the Aegean, Castellorizo Island. I also wholeheartedly recommend a visit to Kastellorizo. We will certainly be returning.