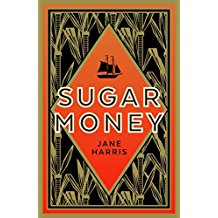 Jane Harris, in her acknowledgements at the end of SUGAR MONEY, tells us of her love for the work of Robert Louis Stevenson and anyone reading this novel will notice the influence. On one level, the book is an adventure story: a dangerous mission, a journey across seas in a rust bucket of a vessel with a rackety and drunken captain; obstacles, perils, dreadful suffering, suspense, and through everything, like a chain of gold, the touching love between two brothers.

Lucien is our narrator. He's a lively, optimistic, chatty teenager and devoted to his elder brother, Emile, who is pining for his own lost love, Celeste. Lucien works for Father Céophas, on Martinique and the two brothers are sent by him to Grenada to bring back 42 slaves,  stolen by the British.

What begins as a typical 'ripping yarn' changes as we progress through the book, into something a great deal darker and the horrors of slave owning are not glossed over. What carries us through is the voice of Lucien which is  the main achievement of this novel.

Jane Harris is the most astonishing ventriloquist. It's hard enough to write in the first person when the character you're writing about is more or less talking in a language like your own, but here, the mixture is rich and strange: Créole and an unusual Caribbean English which seizes the reader at the start and carries her through the book, enchanted by the humour, the poetry and eloquence  of the young narrator.  This is a case of 'show' rather than 'tell' and only by quoting a passage can I hope to give any of the flavour of the speech.  Here is a passage from quite near the beginning of the book:

"All at once I became aware that - from his place at the tiller -  Bianco was watching me close-close.  A kind of uneasiness settled across my heart, for I dislike the way his pale eyes seem to stare into my soul. Jésis-Maia! In haste I turn to face the prow.That way I could keep lookout for sharks and make sure that Emile slept safe. I had no fear of the Béké, not one iota, but if he could not get sight of my countenance then that was an added bait and bonus."

This is a full-tilt, richly- patterned and thrillingly exciting story, brilliantly told.

And now, here are the questions I have asked Jane Harris to answer.

1) The voice in this book is that of a young boy who is also a slave in Martinique a very long time ago. The novel is about slavery, at least in part. Have you had any criticism on account of 'cultural appropriation?' How do you deal with such criticism?

I knew that the notion of cultural appropriation might be an issue from the moment I had the idea for the book. With this awareness, I asked various friends of colour whether they thought I was insane to even tackle the subject and they told me that yes, I probably was insane (ha ha!) but that it wouldn’t matter – as long as the book was good enough. So, I had my task clearly delineated for me from the start: I had to write an extremely good novel.

My personal opinion is that an author ought to be able to write about any subject. I tend to write about characters on the margins, people who have no voice. I’m not much interested in kings and queens etc. Every novel I write is making a point, even if I don’t wear my politics on my sleeve. I felt there was an important story to be told in Sugar Money and I felt compelled to tell it. However, I never forgot my white privilege and did my best to honour the subject matter.

Only one reviewer so far has seemed to be criticising me for writing about slaves and slavery, albeit in a veiled way. You asked how I deal with it. I suppose I just accept that people have their own opinions or their own reasons for being critical. In sum, it’s up to individual readers to decide whether I’ve written a successful novel or not.

2) Are you a slow writer? I say this as someone who wanted another book from you the minute I finished Gillespie and I.

Lastly, real life has a habit of getting in the way of writing, ‘the stuff of life’ etc., which (in my case, over the past decade) has caused many delays.

3) The research you've done is eye-watering. Can you tell us a little about that? Do you enjoy research?

I do love research but it’s time-consuming. I’m thinking of tackling a contemporary book next, just because it will be much easier not to have to carry out the scale and depth of research that I’ve done for the past three books. To write a good historical novel, one has to hold up every word and phrase, every sentence, every fact, every detail, every assumption, every idea, in order to check whether it’s correct for the period. Of course, I accept that it may be necessary to research a contemporary book, but if (say) I live in Manchester and am writing about contemporary Manchester, it’s just obvious that far less research is required. So, although I adore research, I’d quite like a break from it!

It depends what stage of the process I’m at. When I’m actually writing, I start as soon as I wake up (that could be any time between 5am and 8am) and carry on until about 5pm or 6pm, with regular breaks every hour or so to check messages and social media.

However, I do spend a lot of time promoting my books and so on, and there can be periods of weeks and months when I’m not writing at all. I’m not one of those writers who can write ‘on the road’. I need to be at home, living like a hermit. Most of this year has been spent finished then proofing and promoting Sugar Money, plus organising other aspects of my life, for instance, moving home.

5) Can you tell us a bit about what you're doing next?

I’d love to but – as I said above, other than that I’m hoping it will be contemporary - I haven’t decided yet.

6) Please tell us about the kind of book you like to read, and/or any writers you admire.

I tend to prefer fiction to non-fiction, and realism to magic realism or fantasy. I love short stories as well as novels and I do like fiction to have a sense of humour, even if it deals with weighty subject matter.

I don’t really enjoy formulaic, plotty novels. However, I love clever novels that pay some attention to character and narrative, as opposed to the kind of stream-of-consciousness thing I enjoyed when I was younger which now feels a bit lazy to me.

Having said that, if a non-realist novel is good enough, I can be transported by it, and if an experimental novel is hard-working and captivating enough, then I’m on board. 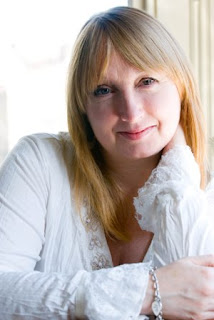 A fascinating conversation. Thank you.