Pandemic then and now... by Carolyn Hughes

My series of historical novels is set in the middle of the 14th century, a period (in)famous for its devastating plague. The first novel wasn’t actually about the Black Death, but about its aftermath and the social consequences for a community that lost between a third and a half of its population.

Now, however, I’m writing the fourth novel in the series and, unfortunately, it is at least partly “about” plague, for the pandemic returned to England in 1361. As a result, right now I’m in the rather curious, and admittedly somewhat uncomfortable, position of writing about a pandemic whilst living through one. I suppose I could have steered the story away from such ghastly happenings, but I planned the book’s storyline long before we’d even heard of COVID-19, and I’m disinclined to ditch a narrative I’ve been working on for a year… For a while I was too unsettled and distracted by the unfolding present-day disaster to even think about the “plague” chapters, let alone write them, but recently I’ve got a grip and am at last making some progress.

But, because I’ve had to think about plague all over again, I’ve also been rereading some of the textbooks on medieval plague, to refresh my understanding about what medieval people thought and felt about it, and how they responded to and dealt with it.

The way COVID-19 has spread so fast and so easily is frightening enough, but doctors and scientists do at least know what it is (they understand the nature of viruses), understand how it spreads (for example, coughing), have some idea of how to mitigate it (for example, isolation, ventilators), have found a way of testing for the disease and are hopefully well on the way to finding a vaccine.

Whereas in the 14th century, people had no idea what the disease actually was, or how it spread. The black rat and its fleas have always been implicated in the spread, but there is also a view that human fleas and lice might also have carried it from person to person, given the speed of the disease’s transmission. Of course, people then didn’t necessarily understand the role of fleas as vectors for disease, though it’s clear they did believe that close contact with a victim was to be avoided.

People did seem to understand the value of isolation as a way of avoiding plague although, practically and logistically, running away cannot have been easy or even feasible. But keeping oneself to oneself was certainly understood. Eyam in Derbyshire is famous for going into “lock-down” in 1665 after plague invaded the village (from fleas in a bolt of cloth apparently). But Boccaccio’s Decameron (completed in 1353) is based on the isolation premise, being a collection of stories told by a group of young men and women who fled Florence to a secluded villa in order to escape the Black Death.

In the 14th century, death was of course everyday – illnesses were mostly incurable, accidents commonplace, life generally subject to all manner of risk. Medieval people ascribed every mishap or disaster, be it the loss of a child, dead cows, a bad harvest, or the failure of the butter to churn, to either God’s will or the Devil’s work. So it was presumably entirely understandable, if terrifying, to be told that the coming of the plague was God’s punishment for man’s sin, for your sin. Especially when God was supposed to be merciful rather than vengeful.

This was what priests told their congregations. In September 1348, at the behest of the king, Edward III, a letter was sent from the office of the Archbishop of Canterbury to all the bishops in the southern counties, ordering them to arrange urgent prayers to be offered up against the plague. It is clear from the letter that the coming of the Great Mortality was seen as divine punishment for sin:

“Terrible is God towards the sons of men… Those whom he loves he censures and chastises… he punishes their shameful deeds in various ways… He…allows plagues, miserable famines, conflicts, wars and other forms of suffering to arise and uses them to terrify and torment men and so drive out their sins.” #

Letters were then sent by the bishops to every parish in their diocese, reiterating this assertion that the Great Mortality was God’s punishment for mankind’s sin, and urging priests and their parishioners to repent earnestly of their sins and beg God for His mercy. These words come from the bishop of Winchester’s letter to his clergy:

“…God often strikes us, to test our patience and justly punish us for our sins… it is not within the power of man to understand the divine plan… the most likely explanation is that human sensuality has now plumbed greater depths of evil, producing a multitude of sins which have provoked the divine anger, by a just judgement, to this revenge.” #

So, according to the bishop, it was “sensuality” that had provoked God’s especial anger…. And one particular aspect of sensuality that some held up as a prime cause of God’s anger was allegedly the fashion for clothing that was considered by some to be both outlandish and indecent.

In 1344, an English monk spoke of the “grotesque fashions of clothing” then current in England, and he upbraided the English for abandoning the “old, decent style of long full garments” for:

“clothes which are short, tight, impractical, slashed, every part laced, strapped or buttoned up.” #

A few years after the second outbreak of the plague in 1361, a chronicler associated the lewd style of clothing with the evil that would undoubtedly follow:

“…the English…remained wedded to a crazy range of outlandish clothing without realising the evil which would come of it.” (From a chronicle of 1365) #

This chronicler was writing twenty years after the monk, so one presumes the “outlandish” clothing was still in vogue.

So, what was it like, this clothing? Indecency and impracticality, as well as frivolousness, seem to have been the main complaints. Here are a few examples from the 1365 chronicler describing men’s fashion:

“…full doublets, cut short to the loins” “…which failed to conceal…their private parts.”

“…particoloured and striped hose…which are called harlottes, and thus one ‘harlot’ serves another, as they go about with their loins uncovered.”

“…a long garment reaching to the ankles, [but] not opening in the front, as is proper for men, but laced up the side to the armhole in the style of women’s clothes, so that from the back their wearers look more like women than men.”

“…little hoods, tightly buttoned under the chin in the fashion of women…the liripipe ankle-length and slashed like a jester’s clothes.”

The three images below give you some idea of very short doublets, and very pointed shoes (the chap on the right in the middle image). These are Italian men so maybe Englishmen’s clothes would have looked a little different but, from the criticisms above, one might deduce that the principles of style were much the same! 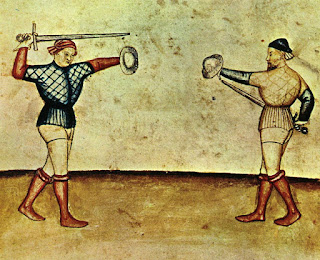 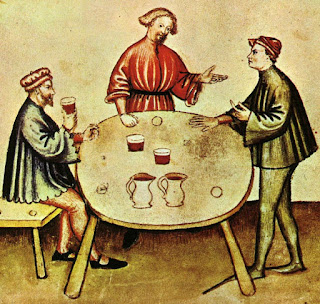 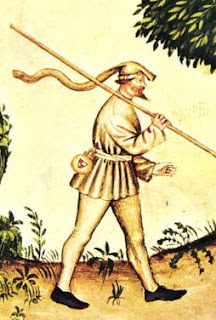 All these images are from the 14th century treatise on health Tacuinum sanitatis.
Public domain via Wikimedia Commons.

Women of course didn’t escape censure – far from it. I think some members of the church were always very willing to find fault with the “daughters of Eve”…

As an example of women’s “lewd” clothing, the sideless surcoat became fashionable in the mid-14th century, a long, sleeveless overdress, with very large armholes, which revealed the fitted gown underneath. Some moralists abhorred the style, saying it drew unwarranted attention to the shape of the woman’s body, in a titillating way that would surely inflame men’s thoughts…

This image shows the style rather well, albeit she is very much a member of the nobility.

Tight clothing does seem to have been the principal concern, and the monk in 1344 gives us another example of it:

“Women followed with the tides of fashion…even more eagerly, wearing clothes that were so tight that they wore a fox tail hanging down insider their skirts at the back, to hide their arses.” #

All these clothes were seen as signs of both lewdness and pride, for men and women alike, and the inevitable precursor to disaster. The monk predicted:

“The sin of pride manifested in this way must surely bring down misfortune in the future.” #

And the later chronicler said much the same, but brought all the other sins into the equation too:

“Because the people wantonly squander the gifts of God on…pride, lechery and greed – and all the rest of the deadly sins – it is only to be expected that the Lord’s vengeance will follow.” #

Clearly all the clothes in these illustrations were worn by the better off rather than peasants although, as some peasants and artisans became more prosperous, they too aspired to, and acquired, more fashionable clothes, which was even more deeply frowned upon. In the 1360s, sumptuary laws were brought in to curb this unseemly blurring of the social hierarchy, but this was presumably more about the upper classes wanting to maintain their fashionable distinction than worries about indecency…

But doesn’t it all seem rather odd – hilarious, even – that fashion was held responsible for the coming of the plague? Or even that immorality should take the blame? But the chroniclers were certainly moralists of one kind or another. And plague was perhaps a good pretext for them to criticise the masses for their bad behaviour. Not that most people, of course, would, or could, have read the chronicles, though I suppose they might have heard similar sentiments coming from the mouths of their priests. But I wonder to what extent the average Englishman or woman believed them? How I’d love to know…

# All texts are taken from The Black Death, translated and edited by Rosemary Horrox.
Posted by Carolyn Hughes at 00:30

Thank you -- I enjoyed this.
As I read, I was thinking that, since the public at large seem to have taken zero notice of the preachers and carried on wearing their licentious clothes, maybe they thought of the preachers much as we think of those today who talk about aliens among us, disguised as lizards?

Fascinating, Carolyn, and how topical. Interesting that Medieval people ascribed disasters to God's will (or the Devil's work). This reminded me of Homer's Iliad in which the Greeks and Trojans attribute misfortunes to the gods on Olympus e.g. the plague sent by Apollo in Book 1. I really enjoyed your descriptions of the fashions and 'racy' attire! Great illustrations, too. The Waterhouse painting is lovely. Thank you for such a thought-provoking post!

Idly browsing The History Girls posts, I have only just seen your comments, Susan and Caroline 🙄. But I’m delighted that you enjoyed my post - and thank you so much for your thoughts...