IF IT'S CHRISTMAS IT MUST BE WESTMINSTER 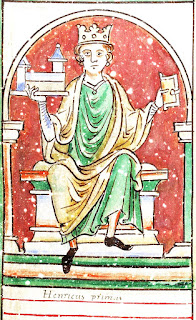 Some years ago I wrote up the peripatetic wanderings of King Henry II for The History Girls blog and it proved to be popular. You can read it here If it's Christmas it must be Chinon

At the moment I am writing about events that happened during the reign of Henry II's grandfather, Henry I, so I've been studying his itinerary, to see where he spent the Christmas feast for each year of his reign between 1100 and 1134.  He died just before Christmas 1135 while in Normandy.  His Christmas's were equally divided between Normandy and England. Of the 18 Christmasses Henry spent in England, 7 were at his palace of Westminster with the recently completed huge Great Hall built by his brother William Rufus. Five were spent at Windsor, two at Dunstable, one at Winchester, one at St. Albans, one at Norwich, one at Brampton.  In Normandy there are ten occasions when we do not know where he stayed, although a best guess for most of them would probably be the Norman capital of Rouen.  We do know  for certain of three Christmas stays in Rouen, then one in Bayeux, one in Argenten.  In the final year of his reign, he did not make it as far as Christmas, dying (supposedly) of a surfeit of lampreys at his hunting lodge at Lyons la Foret on the first of December while waiting to return to England.

Without further ado, on to Henry I's Christmas itinerary.

1100: Westminster. The First Year of Henry's reign after the unfortunate accident in the New Forest when his older brother William Rufus was shot by a 'stray' (cough) arrow.  Henry, fortuitously on the scene at the time, sped off to Winchester to claim the treasury and the crown.  He married Edith, daughter of the King of Scotland in the November, and spent Christmas at Westminster. 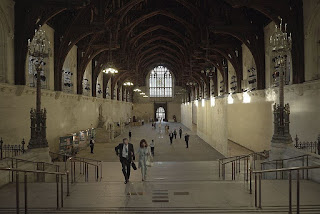 Photo (Wikipedia) shows Westminster Great Hall today.  The roof is 14th century, but the lower course of the wall shows the dimensions of the hall as built by William Rufus in the late 11th century.

1104  Windsor - for a change. The King had been in Normandy for part of the year and returned to spend Christmas at Windsor.

1106 Rouen - Possibly.  The King was in Normandy and in Rouen on the Feast of St Andrew - 30th November.

1108  Normandy - no indication as to where but possibly Rouen

1110  Windsor possibly. ''On this year the King did not wear his crown at Christmas'.

1111 Rouen possibly.  The King was definitely in Normandy.

1114 Normandy - unspecified. In the early spring the King was at Rouen and caused the barons of Normandy to swear fealty to his son, William.

1115  St. Albans, 'where he caused the monastery to be hallowed'

1120 Brampton near Huntingdon.  This is the year of the White Ship where Henry's son and heir, William and many members of the younger English court were drowned on the 25th of November, returning to England from Normandy on a new, fine vessel, that then hit a rock off the coast of Barfleur and sank with all but one of those on board.  Henry kept Christmas with Theobald Count of Blois, older brother of the future King Stephen...

1124 Normandy - unspecified. We are told that the Nativity was held at Winchester and that the king's Justiciar, Bishop Roger of Salisbury caused all false moneyers to be brought to Winchester and during the 12 days of the Feast of the Nativity, he caused each to be deprived of his right hand and emasculated.

1130 Rouen. For those interested in the career of William Marshal's father, he is present witnessing a document confirming privileges of the priory of St Mary le Desert with the archbishop of Rouen. 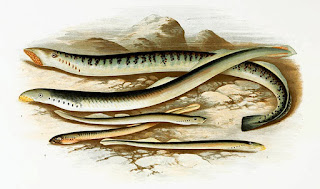