Bicycles and Revolution by Joan Lennon


As we watch these elegant, white-clad, straight-backed ladies weave genteelly in and out, it is hard to remember that they were commiting an act of rebellion.  Snooks were being cocked.  Gauntlets flung.

At the end of the 19th century, a bicycle with a woman astride was still a disconcerting sight - a challenge to trouser-wearing men.  In Cambridge, when the question of full degrees for females was being discussed in the Senate, an effigy of a "rationally dressed" lady on a bicycle was hung out of the window of the building opposite, flanked by banners declaring “No Gowns for Girtonites” and “Varsity for Men”. 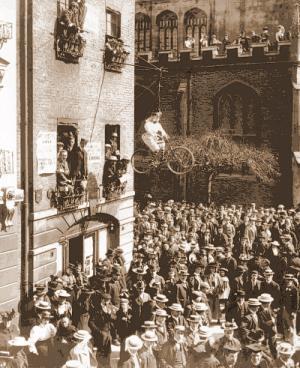 The effigy was burned later in the day, and the motion was defeated.  But the ladies went on riding.  They wore bloomers.  They went places without being taken by a man. They started carrying toolbags.


"Let me tell you what I think about bicycling," said Susan B. Anthony, American campaigner for Votes for Women, in 1896.  "It has done more to emancipate women than anything else in this world. It gives her a feeling of self-reliance and independence the moment she takes her seat; and away she goes, the picture of untrammeled womanhood. I stand and rejoice every time I see a woman on a wheel."

It was a wheel that would not be turned back.  But completely "untrammelled womanhood"?  Not quite.  Even in a world full of "new women" there had to be some standards ... In 1895 the New York World printed a list of Don'ts for Lady Cyclists, which included the following admonitions:
Good advice about cows, though.

Many thanks to Joan Lennon, who is one of our History Girl Reservists, for this fascinating post. You can read about her on the About Us Page.

Wow. What wonderful images! So - fifty years on from the date of the Tenth Edition (see my post of yesterday, below) Young Ladies were bursting conventions and riding bicycles. Goodness knows what the rev. John would have had to say: HE thought riding habits were scandalously masculine. What a difference a few decades can make! And what a relief!

Thanks, Katherine! When I get depressed by the relentless pinking of girls today I should remind myself of where we were then!

Great article. I cycled alone from Oxford to Rennes (using a ferry for the Channel part) and wish to thank all those cycling women pioneers for making that possible (in 2008). But there is still so much to do, to prive.
Thank you.

"Still so much to do, and ..." after that I'm not sure what my iPod touch spewed out

I especially liked 'don't scratch a match on the seat of your bloomers' That's a piece of advice every girl should know!

Great post, which reminds me of the story of Lady Harburton of the Rational Dress Society, who in 1898 was refused service after arriving by bicycle at the Hautboy Hotel in Ockham, Surrey, due to her wearing "exceedingly baggy knickerbockers" as you can read in the link.

There was the guy in Lark Rise to Candleford (the book, not the tv programme) who said something like: 'Every time I see a woman on a bicycle I want to pull her off and spank her bottom.' As a punishment, it is suggested, but there is a rather dubious undertone to modern ears (or eyes) and I feel sure that his fantasies of subduing the impudent female rider had sexual content. Indeed, a kind of rape, when I come to think of it. But it is another thing that demonstrates quite how outrageous a woman on a bicycle was. A fish might not want a bicycle, but a female does..
Love the pictures! Thanks, Joan!