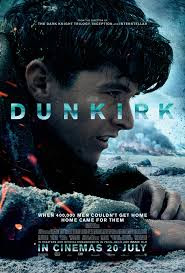 I went to see Dunkirk earlier this week. Not the town but the film of the same title written and directed by Christopher Nolan. It is a remarkable piece of art but is it a good film? And is it historically accurate? And does that in fact matter? I went with a completely open mind and was determined to leave my historian's hat firmly at the door. Trouble is, I went with an American friend and his English-born wife who had no idea about the history behind the evacuation at Dunkirk as the USA did not enter the war for another eighteen months.

So I gave them a very brief outline: as the Germans stormed across the Netherlands, Belgium and then parts of France hundreds of thousands of soldiers and their equipment were trapped in a small area of land around the French seaport of Dunkerque known of course by its British name Dunkirk. It is just 10 kilometers (6.2 miles) from the Belgium border and in May 1940 was teaming with troops from the British Expeditionary Force and the French, Belgian and Polish armies. Between 26 May and 4 June 338,226 soldiers were rescued from the harbour and beaches by a hastily assembled fleet that comprised over 800 boats, some of them trawlers, pleasure craft and barges. There was even a paddle steamer, HMS Daffodil, that had ferried evacuee children from Dagenham to Lowestoft in September 1939. Of those men rescued, over 120,000 were French. And the Little Boats, as they became known, came not only from across the Channel but further up the western coast of mainland Europe. Some forty Dutch vessels with naval crews rescued around 26,000 men.

The evacuation of Dunkirk, known as Operation Dynamo, was deemed a miracle. For those caught up in the flight from the Germans it was a terrifying and humiliating ordeal. My grandfather, then Major Philip Toosey in the Territorial Army (4th West Lancs) was picked up on the night of 2 June 1940 in the last contingent of British troops to be rescued. The following evening he had dinner with his wife in Manchester. He wrote after the war: 'This, I think, was one of the most vivid contrasts of the whole war – the night before standing up to my neck in the sea at Dunkirk with not a great hope of ever getting home and the next night having a very good dinner in the Midland Hotel.' He had been picked up along with the remains of his regiment by a Thames barge which was holed below the waterline and constantly in need of baling out. The barge eventually drew alongside a larger vessel and the men were able to scramble up the nets on the side and to safety. As the last man clambered up the ladder on the side of the minesweeper the barge gurgled and sank.

In fact, of the 861 Allied ships that were involved in the Dunkirk evacuation, 243 sunk but not all by enemy action. Some sank, like the Thames barge that rescued my grandfather, too old and ill-adapted to the sea. Others were attacked from the air and by mines. It is estimated that the cost in human terms was some 3,500 British killed or drowned at sea or on the beaches with a further 1,000 lives lost as a result of air raids on Dunkirk. About 40,000 British troops did not make it back across the channel. They were taken prisoner by the Germans and spent the rest of the war in POW camps. It was by any measure an extraordinary episode in the early years of the war and one which captured the imagination of the British public back home. The spirit of Dunkirk became a by-word for resilience and bravery, only to be eclipsed a few months later by the Blitz spirit as Britain itself came under air attack.

Back to the film. It is impressive on so many levels. The score is fantastic. Hans Zimmer uses Edward Elgar's Nimrod to such powerful effect that when the audience see the Little Ships for the first time it is hard to hold back the tears. The conceit of the film merges three time frames: a week for the soldiers; a day for a captain of a pleasure craft and an hour for a Spitfire pilot. That too works well. The cast is outstanding, the photography magnificent, the scenes of drowning and death powerful. Yet something, for me, is missing. It is not the history. It is the humanity. This, after all, was a massive human triumph and tragedy in equal measure. For individual men it was a matter of life or death but somehow, I do not now how, that is missing from this epic film. And without the human story history films, however impressive, are just a visual spectacle.
Posted by Unknown at 00:00

I've been wondering whether to go and see this, and now I shall. Thanks for your personal insights, Julie. My mother was driving an ambulance to pick up casualties in Kent, while my father was busy rewriting history for the Ministry of Information. Two months later they got married, and had babies in the blitz.
One of the Little Boats was a small lifeboat funded by Girl Guides holding jumble sales, and doing odd-jobs. It wasn't quite finished and still un-named when it went back & forth across the Channel. She was later named 'Guide of Dunkirk'.
Kenneth Branagh always finds it difficult to put any life into his characters. I imagine he mumbles in a depressed way through the film. I look forward to watching it.

I saw it on Thursday and I hardly ever do to films - especially not war films. But I did feel the humanity you missed in it.

I thought it was a great film.

I have not yet seen the film but mean to do so. I think the problem with Dunkirk is that there are thousands of stories, and no film will never be able to cover them all. I did not know that Dutch ships also helped the evacuation, for example, and I read this week that Indian troops were also rescued, although not shown in the film.
One story I read years ago is that on arrival at Dover, one of the first things the soldiers wanted to do was tell their families they were safe, but did not have writing paper, and were exhausted and often wounded. So one of the Wrens got a local printer up to run off thousands of postcards saying 'Safe in England', and the soldiers, or a helper for wounded men, just had to sign and address them. The Post Office workers did extra shifts to get them sent off as soon as possible. It would be nice if these stories could all be recorded somewhere.