Gibbon's Decline and Fall – Reading for the age of Austen? by Alison Morton

In his Companion to the Roman Empire (2006), David S Potter called Edward Gibbon the 'first historian of the Roman Empire'. In The History of the Decline and Fall of the Roman Empire charting AD 98 to 1590, Gibbon was certainly the first in the modern era to use primary sources, cite those sources in detail and comment objectively, even if not politically correctly for the 21st century reader. His style is slightly ironic, certainly detached and lapses occasionally into moralising. The notes accompanying the text are almost chatty and often comment on both ancient Rome and 18th century Britain.


After a war of about forty years, undertaken by the most stupid,7 maintained by the most dissolute, and terminated by the most timid of all the emperors, the far greater part of the island submitted to the Roman yoke.
The various tribes of Britain possessed valour without conduct, and the love of freedom without the spirit of union. They took up arms with savage fierceness; they laid them down, or turned them against each other, with wild inconsistency; and while they fought singly, they were successively subdued. Neither the fortitude of Caractacus, nor the despair of Boadicea, nor the fanaticism of the Druids, could avert the slavery of their country, or resist the steady progress of the Imperial generals, who maintained the national glory, when the throne was disgraced by the weakest, or the most vicious of mankind.
7 --Claudius, Nero, and Domitian. A hope is expressed by Pomponius Mela, l. iii. c. 6, (he wrote under Claudius,) that, by the success of the Roman arms, the island and its savage inhabitants would soon be better known. It is amusing enough to peruse such passages in the midst of London.*


When assessing the character of any subject, Gibbon is at pains to give a balanced view, unlike the authors of previous partisan or quasi-mythical stories, so enabling the reader to feel confident of his methodology and his account.


A more accurate view of the character and conduct of Julian will remove this favourable prepossession for a prince who did not escape the general contagion of the times. We enjoy the singular advantage of comparing the pictures which have been delineated by his fondest admirers and his implacable enemies. The actions of Julian are faithfully related by a judicious and candid historian, the impartial spectator of his life and death. The unanimous evidence of his contemporaries is confirmed by the public and private declarations of the emperor himself; and his various writings express the uniform tenor of his religious sentiments, which policy would have prompted him to dissemble rather than to affect.*


Gibbon wrote his account between 1776 and 1789, significant dates in a period of political turmoil.  Living amidst rebellion against mother country, economic failure, overthrow of monarchy and war across the Channel must have been, to say the least, stressful for informed Enlightenment gentlemen of letters. To what extent these events influenced Gibbon’s History is hard to say, but all writers are the product of their age. In a letter to Lord Sheffield on 5 February 1791, Gibbon, then living in Switzerland, praised Burke's Reflections on the Revolution in France:


Burke's book is a most admirable medicine against the French disease, which has made too much progress even in this happy country. I admire his eloquence, I approve his politics, I adore his chivalry, and I can even forgive his superstition...


By the time Volumes IV, V and VI were published Gibbon was being praised by contemporaries as William Robertson, Adam Ferguson, Lord Camden, Horace Walpole and Adam Smith who said, that Gibbon's triumph had positioned him "at the very head of [Europe's] literary tribe.". In November, he was elected a Fellow of the Royal Society. 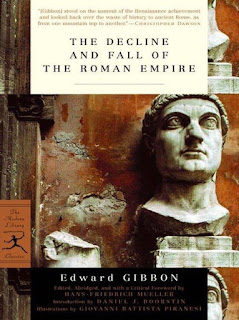 How does this connect us to Jane Austen whose anniversary we are celebrating this month? She lived from 1775 to 1817, so was a baby when Gibbon published the first volume.  Even when he had finished the last she would only have been 14. After periods away at school, Jane stayed in her family circle from 1786 onwards. The remainder of her education came from reading, guided by her father and brothers, James and Henry.

Gibbon’s History was groundbreaking and an acclaimed bestseller at the time and I suggest that Reverend George Austen and his friend Warren Hastings were very likely to have had copies in their libraries. I rather like the idea of Jane Austen turning the pages of a first edition of the first modern history book.

Although not mentioned as I remember, I’m sure Mr Bennet would have had a copy in his library as would Mr Darcy; both would have read it. Mr Bingley probably not, but being fashionable he would have had a copy in the library at Netherfield. Perhaps Mr Woodhouse had one and perhaps he read it in between head colds; I’m not entirely sure. Emma’s Mr Knightly, Elinor’s Edward Ferrars and Colonel Brandon most certainly would have a copy and read it. Of the ladies, I wonder. Much of their time was consumed in the daily business of living, paying social calls and attempting to secure their future with a good marriage.

Gibbon’s History is known for its status as a first history book and for its sweeping content across fourteen centuries. He follows the fate of both Western and Eastern (Byzantine) Roman Empires. Any aspiring Roman fiction writer should read it for detail and inspiration; the history student for a study of basic methodology and use of sources.  But given the number of reprints, new editions with scholarly prefaces and introductions, the History seems to be as popular for the general informed reader as it would have been in Jane Austen’s day.