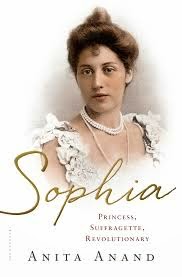 Anita Anand’s “Sophia” tells the story of the youngest Princess of the royal ruling family of the Punjab. Yet this biography opens, not in India, but at a suffragette meeting in Caxton Hall, Westminster, on Friday 18th November 1910.

On the platform in the crowded hall sit the leading suffragettes: Emmeline Pankhurst, Elizabeth Garrett Anderson, Christabel Pankhurst and more. At the back of the stage was a small, dark-skinned figure dressed in Parisian couture. That small, fierce face belonged to Princess Sophia Duleep Singh, activist and suffragette.

Who was Sophia, and what was a young Indian woman doing there anyway?

The meeting ended with a march to the gates of Westminster, the mother of Parliaments. All that the women wanted was the right to vote but many thought that an irrational demand. The marchers – Sophia among them - were brutally attacked, groped and beaten by uniformed and undercover police as well as crowds of jeering onlookers. Sophia, witnessing a vicious beating, took down the constable’s number and wrote so many letters of complaint that Winston Churchill refused to reply any more. That was his only way of stopping the Princess. Sophia, the admirable subject of this book, was never one to step back when someone needed her help.

“Sophia” is a book that covers a span of history as much as it covers a single life. Born in 1876, Sophia had Queen Victoria as a godparent. By the time of Sophia's death, in 1948, King George was on the throne, and the Empire was ending. The subject - no, the heroine of this book lived through so many events that I appreciated the way Anand gave the full story, whether it was what happened to the Koh-I-Noor diamond, or the cold-hearted massacre at Amritsar, or Asquith’s derailment of the women’s suffrage bills, or the story behind Gandhi’s hunger strikes and more. Many of the stories I half-remembered, but the emotional impact was greater for having them fully retold. 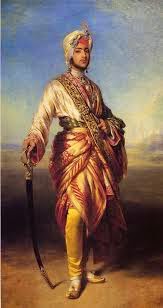 Although Sophia lived in the heart of British society, she was in many ways an outsider. Sophia and her siblings were proudly aware of their royal lineage. Their grandfather, Maharajah Ranjit Singh, had been known as “The Lion of the Punjab”. After his death, the British forced his eleven-year old son, Duleep to give his kingdom to the Crown. The young Sikh was re-educated as Christian gentleman and, being a favourite of Queen Victoria, brought to live in London. All too soon the  handsome Indian prince became a society playboy, shooting, hunting and gambling in the company of the Prince of Wales, and decorating his Suffolk home, Elvedon Hall, in extravagant Moghul style. Meanwhile Duleep's neglected Maharani struggled with a succession of squabbling children. All had strong personalities: Victor, imperious; Frederick, obstinate; bad-tempered Bamba and secretive Catherine. Sophia was born after a five year gap, and was such an easy baby that she drew the siblings together, already the family mediator.

Trouble lay ahead. Their father Duleep had ignored warnings about his extravagant spending, even from the Queen herself. His attitude was understandable: had he not handed Britain his valuable kingdom? How could they not give him what he needed? At last, offended by the Government’s refusal to pay his debts, Duleep stripped Elevedon Hall, selling everything. To Queen Victoria’s distress, he renounced Christianity and set off for the Punjab. British officials halted the family when they reached Egypt. Furious at the endless delay, Duleep abandoned his wife and young family, and set off for Paris and his new mistress.

The picture that Anita Anand gives of Sophia’s early life and family background is fascinating, but it is clear that the constant tension must have felt intolerable. She shows the siblings lives were full of contradictions: they had servants to order about but were themselves regularly spied upon and reported to the Government; they could indulge in extravagant fashions but their money was granted by the India Office; their presence in Britain was dependent on the Queen’s goodwill, as well as on matters of national security, and although as rich aristocrats they were welcomed at society occasions, their Indian heritage made them outsiders.

Growing up, Victor embraced his father’s dissolute lifestyle and was eventually sent to America, while Frederick turned into an extremely conservative Anglophile. For a period, the society whirl claimed Duleep’s daughters. They had been offered a grace-and-favour residence at Hampton Court, and “came out” into society. Sophia embraced her new life: she was keen on horse-riding, bicycling, dog-breeding, photography and  Turkish cigarettes, as well as indulging in extravagant fashions and in seasonal European travel. Yet they were still not permitted to travel to India.

The rush of aristocratic guests for the Delhi Durbar gave the sisters their opportunity to travel quietly. (Anand gives a wonderful description of the magnificence of this event – and the fact that much of India was starving at the same time.) The sisters arrived, but were disappointed. The expected “introductions” did not come, nor any offers of seats or tents or views for the princesses. The British in Delhi did not “recognise” the trio of Indian sisters. Only when they travel towards the Punjab did they receive a proper welcome. Afterwards, Bamba stayed on in Lahore, Catherine returned to Germany and her beloved governess, and Sophia returned alone to Hampton Court. There, apart from her dogs, there seemed to be nobody who needed her. Sophia, as she often did at such times, fell into a profound depression.

Anand’s biography shows Sophia constantly searching out new causes. Witnessing the plight of Lascars - the lowliest ship-hands – on a voyage, Sophia arranged better shelter and financial aid. As a Red Cross nurse, Sophia looked after wounded Indian troops in France. On a second visit to India, she attended revolutionary meetings with Bamba. 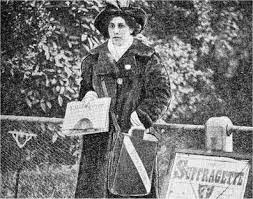 Then there is the cause that opens the book: Sophia's involvement with women’s suffrage has, until this biography, largely been hidden. Sophia was from aristocratic circles so she was never imprisoned, even when she flung herself across the Prime Minister’s car, waving “Votes For Women” banners. Her name is rarely recorded. Anand shows that even though Sophia may have been shy, she was determined: Sophia even stood outside her grace-and-favour residence, dressed in her best furs, loudly proclaiming the cause and offering the Suffragette paper to passers-by. She so annoyed the neighbours that they sent messages to the palace officials asking for the troublesome Princess to be removed from her home.

Anand depicts Sophia as an intriguing woman, kind and fiercely loyal to her family, proud of her position and heritage yet uncertain of her place in society. Sophia is a determined letter-writer and petitioner; often awkward with strangers yet devoted to her dogs and anyone who needs help.

I found the last part of Sophia’s life sad. As she grew older, and further away from the interest of the “new” royals, she retired to Coldhatch House in Penn, Buckinghamshire where her imperious attitude made her new servants dislike her. On the other hand, there are glimpses of happiness. Anita Anand describes Sophia’s relationship with young evacuees and her affection for her housekeeper’s daughter Drovna. These offer some clue to the life Sophia might have led if it had been possible for her to marry and have children of her own.

My hope is that this review should not make “Sophia” sound daunting. I found this biography as readable as novel and full of many wonderfully described incidents and events. In fact, I often paused, picturing one or another of the scenes again in my own imagination. The book told a very rich story indeed! “Sophia: Princess, Suffragette, Revolutionary” by Anita Anand is a most remarkable biography.

Coldhatch House - a sad-sounding setting for the end of a remarkable life! Thanks for introducing me to her - I'd not heard of her before -

Yes, thanks for this, Penny - a wonderful, thoughtful review of a fascinating book.

Thanks. One point the book stresses is that - having seen what it cost so many women to get the vote - Sophia made young Drovna promise she would always use her vote.

Very interesting, and I must read the book! Thanks for pointing it out, Penny.