This post was to be called ‘A Pillar of the Community’. It was designed as a campaigning piece about a fascinating but little-known Victorian horse hospital at Blows Yard by Borough Market in London.

But I’m still lacking one crucial piece of information about the Blows Yard horses and their hospice, so that story will have to wait till next month. As I usually write about Venice, and I’m here (amid mist and acqua alta) now, my thoughts have turned instead to the only kind of horse one finds these days* in la Serenissima – seahorses.

Who isn’t intrigued by sea horses? They are unique in their tail twirling locomotion, the primitive inscrutability of their faces, and also in their breeding habits, which I regard as pioneering: the female deposits eggs in the male’s ‘brood pouch’ where he fertilizes and incubates his young until he goes into labour and gives birth to them.(‘Push, Papa! Push!’).

Here are some seahorses, twirled and untwirled, from the Wellcome Trust's collection. 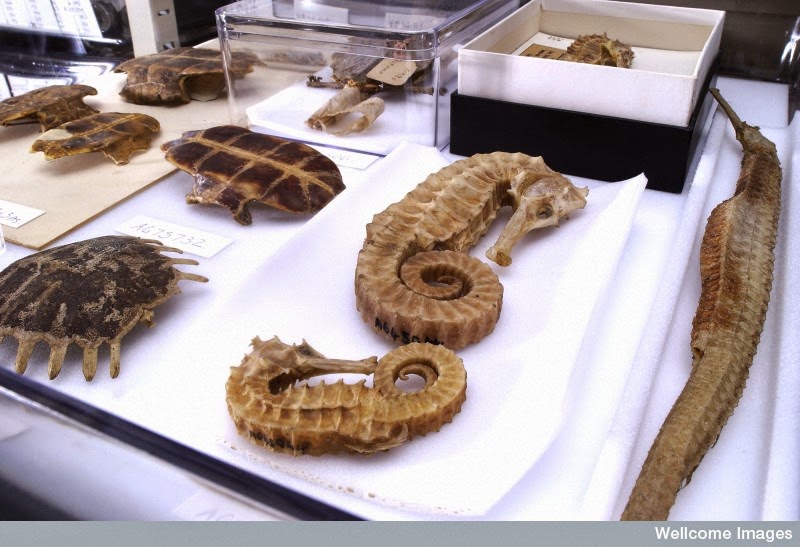 And they have such wonderful names! Among the 54 known species of this animal, we find Hippocampus abdominalis (pot-bellied seahorse) 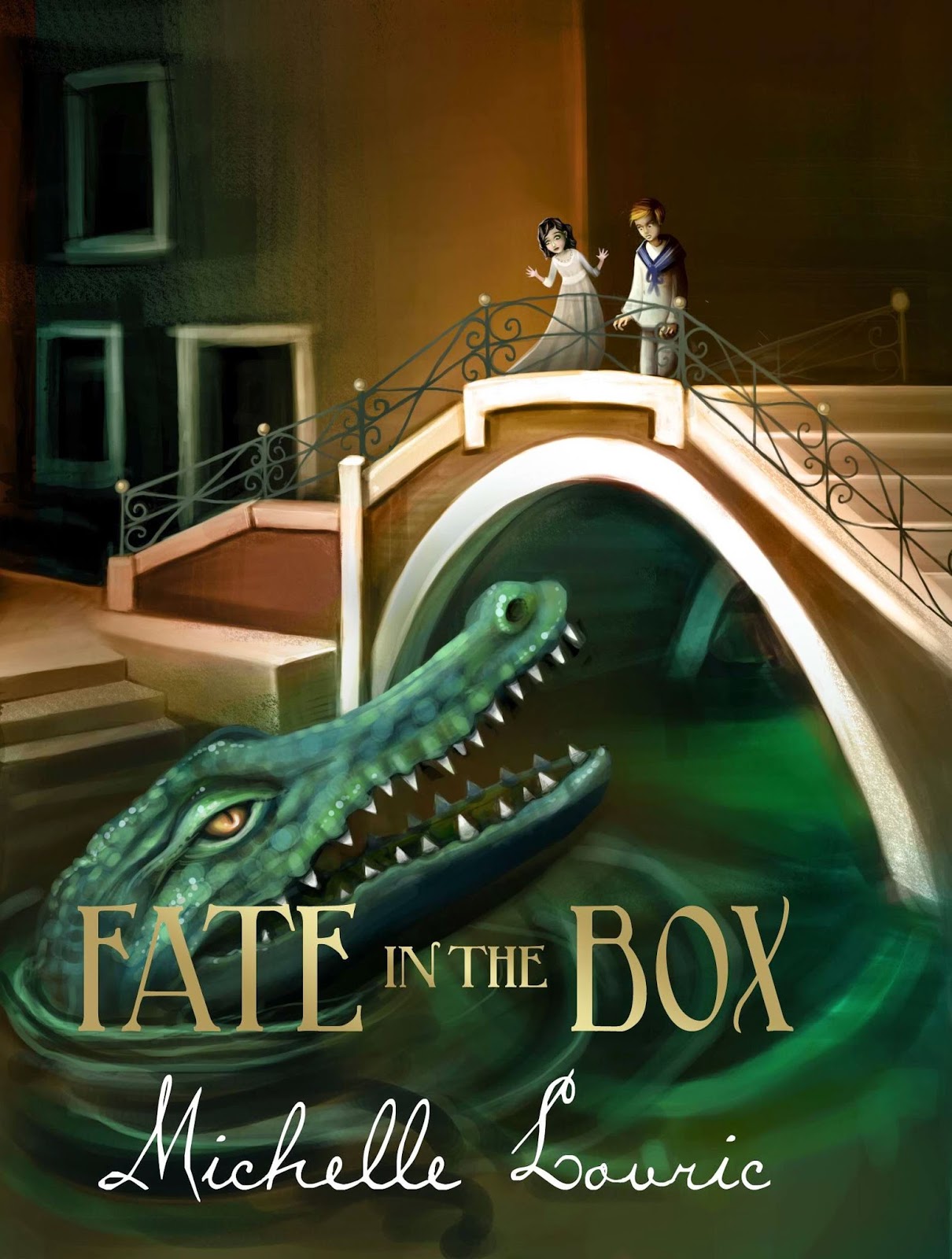 In my last children’s novel, The Fate in the Box, I used blue glass sea horses as the talisman of trust passed between members of I Piccoli Pochi, secret freedom fighters trying to find a way to bring down the corrupt regime of a tyrant known as Fogfinger.

I wrote about the seahorses on this site two years ago.

But to recap briefly, seahorses really were used as good luck talismans in Venice where nursing fishwives sometimes kept a dried example tucked into their bodices to facility the flow of their milk. In 1902, the English folklore specialist Edward Lovett went to Venice where he commissioned some examples of Venetian seahorses in pink and blue glass, which can today be seen at London’s Wellcome Collection. Lovett, the author of Magic in Modern London (1925) believed that the distinctive shape of the gondola’s metal ferro was based on the form of a seahorse. 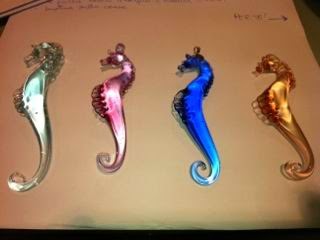 Venice’s own Natural History Museum keeps a miniature section of the Northern Adriatic Sea’s living natural history in an aquarium. Several graceful seahorses constantly make their way across the tank. John Ruskin, as I noted in another blog, recommended catching a few Venetian seahorses for observation of their movements, but was disappointed when they failed to grasp his pencil with their tails.

I commissioned some copies of Lovett’s sea horses from a proper Murano glass works - see the picture above. As I’m not a nursing mother, and a glass seahorse is a chilly object to stow in in a History Girl’s bodice, I had different plans for my commission. Instead I put a few glass seahorses in the window displays I was making for bookshops for The Fate in the Box. I blogged about that at The Other Place, in a post called Buying Crocodiles on Ebay.

In Italian, a seahorse is called ‘un cavallucio marino’, which has a courtly ring to it. On Wikimedia Commons I found this beautiful seahorse coat of arms designed by Sabine Cretella. 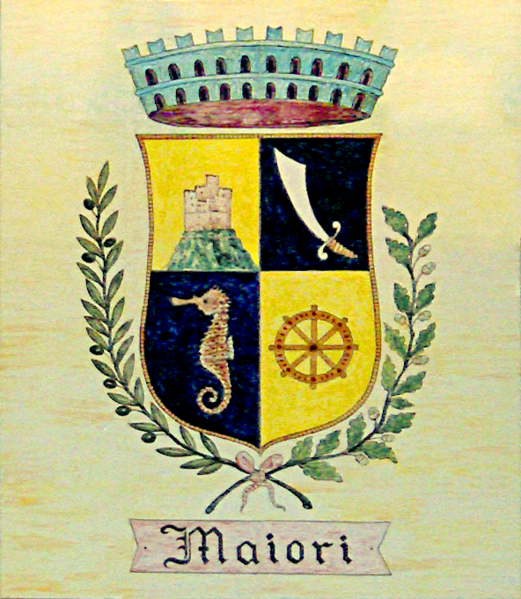 The seahorse is totemic to several towns and even a football club.

Given its otherworldly mystery, the seahorse would have featured in the cabinet of curiosities of any sixteenth century gentleman worth his salt. See the one middle right here in Frans Francken the Younger’s painting, now in Vienna’s Kunsthistorisches Museum (courtesy of Wikimedia Commons). 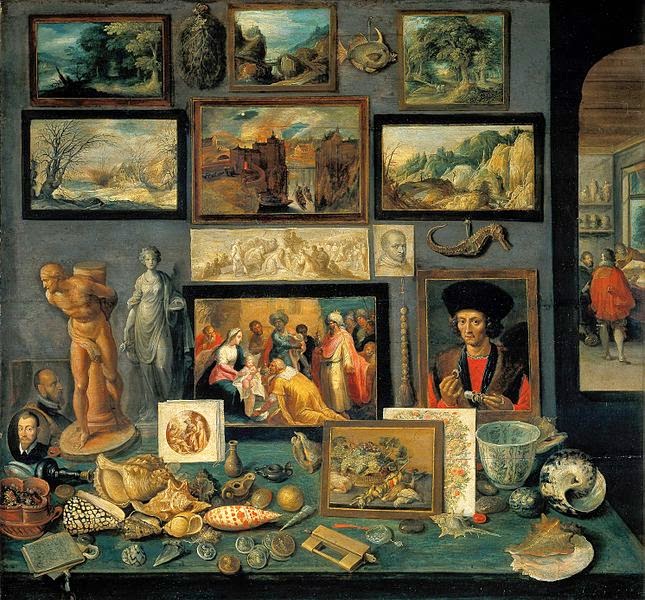 The man depicted is Abraham Ortelius (1527 –1598), the Flemish cartographer who invented the idea of the atlas. He is also thought to be the first scientist to pose the theory that the continents of the world were once joined together and eventually drifted apart. Who knows if the gentle drift of his pet seahorse influenced him in this radical idea?

Most of my children’s novels feature mermaids in Venice, and the current WIP also contains a few hippocamps, the great grand-daddies of seahorses, at least in size. Hippocamps differ from seahorses physiologically in that their heads are more equine in the Mammalian sense. The Venetian ones, such as this one on the tomb of Andrea Vendramin, at SS Giovanni e Paolo, often have forelegs streamlined into furry flippers. 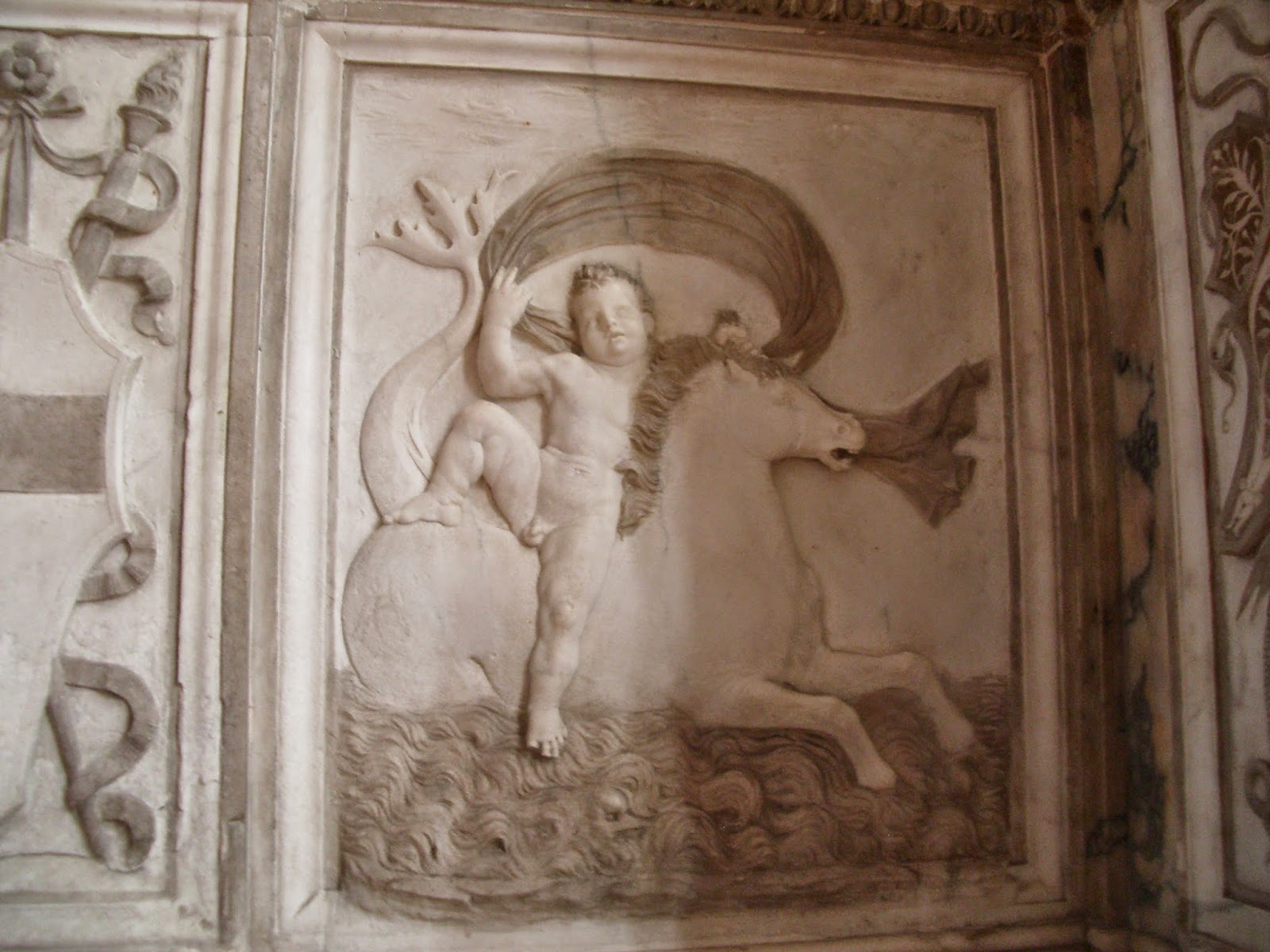 One can imagine human-sized mermaids riding such a big beast. And indeed Frederick Church Stuart did, in Plate 6 in the book "Choice Etchings" (London: Alexander Strahan, 1887 – thanks to Wikimedia Commons again). 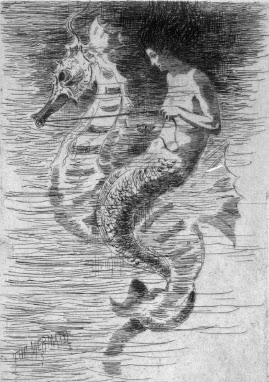 Hippocamps are all very grand, but there is something about the miniature nature of the real seahorse that fascinates me more.

I became interested in the seahorse population not just of of the Grand Canal but of the Thames, which flows beneath my home in London. In that great grey-green, greasy river, all set about with skyscrapers, we too have seahorses nosing through the churn of mud: hippocampus hippocampus, or ‘short snouted seahorse’, a protected species that dines on shrimp and baby eel. The London Zoological Society reported finding this rare seahorse in the Thames in 2008. The creatures are now part of a breeding programme at London Zoo. You can see some of 918 baby seahorses being born in one day in this video. (Push, Papa!)

At the time of my seahorse researches, I was part of a Poetry School masterclass taught by the wonderful Robert Vas Dias. I produced this poem as one of my weekly homeworks, bringing the Thames seahorse into a love triangle. In this poem about good faith and fidelity, notions betrayed by everyone except, perhaps, that thorny sea-steed, hippocampus hippocampus.


Professor Mann’s at war with faithfulness.

with Dr Jane Kettle, who deployed a thesis

on doomed whales in the estuary to lure him

from his Californian wife. At first

Kettle seemed cold, would not permit a kiss

in the laboratory but now she lets Mann handle

her hotly and in scientific detail by the river

where mist steams from the roiling water.

When they crawl back from Eternity to here,

bashful on the brick-flecked, pungent shore,

gallant in ancestral armour, has threesomed their tryst.

While they ploughed the river-bank with warlike cries,

Blood enemy to the tribes of eel and Mysis shrimp,

*Noblemen used to keep up to seventy horses at the Cavallizeria near SS Giovanni e Paolo.

Such wonderful and strange little creatures. They seem as if they've strayed here from another world or mythical time. And I really envy you your glass seahorses. Magical!

Those seahorses commissioned by Lovett are gorgeous. Such exquisite colours. Or is the quartet displayed in the photo those you commissioned from Murano? They are fabulous. I LOVE seahorses. I am/was a scuba diver and to be under the water with them…. Dreamy post, Michelle

Love the thought of a paradoxical seahorse! Loved the poem too - thanks for posting!

There is something very enchanting about seahorses and you have captured it perfectly.