The German phrase Lügenpresse has come into use again in the last few years with the renewed rise of the far right across the world. This is a term that can be easily searched for and found online, but I thought it was worth bringing up here to highlight how insidious and loaded a term it really is.

The term first surfaced in Germany in the 19th Century and first became widely used around1848, by Catholics as a response to an increasingly liberal and hostile press. It was used again to describe the enemy propoganda in WW1. And, most infamously, it was an anti-democracy cry used by the Nazis during their rise to power in the 1930s.
It fitted with the Nazi conspiracy theory that the Jews secretly ran the country and press and were lying to the German people for their own ends. The effects of this propoganda and stirring up of hatred are too well known to be repeated here - millions died horribly as a result.
Naturally, once Hilter and his party had seized power, they no longer used this term. Ironic, given that the Nazis' entire news and education network was one big barage of propoganda and lies. 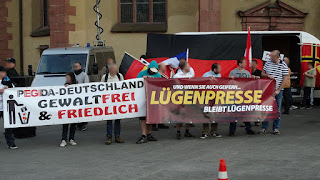 By Opposition24.de [CC BY 2.0 (http://creativecommons.org/licenses/by/2.0)], via Wikimedia Commons

It is disturbing to see the term on the rise again. With the loss of faith in the establishment in the Western world - some would say as a consequence of the rise in inequality and the resentment that brings - the press has also come under attack. In Germany, the term Lügenpresse has come into use again in connection with the rise of Pegida, the anti-islamic movement in Germany. Pegida has mainly gained traction in the former East Germany, where there has been lower immigration and historically less positive engagement with coming to terms with Germany's fascist past than in the West. Althought Pegida claims to be a peaceful movement, there is little doubt the agenda is far right, and it is also a fact that journalist covering the marches have had to take security with them after a number of their colleagues were physically attacked.
Germany declared the term taboo in 2015. In a country still troubled by its past, the rise in a Nazi slogan was disturbing.
The word's connection to its historical past becomes all the clearer when it is observed in the rise of Trump in the USA. In the final weeks of the campaign, the term Lügenpresse was shouted at rallies and meetings by the alt-right. It was even accompanied in places by the Nazi salute and shouts of 'Hail Trump'. The fact that these groups can knowingly adopt a Nazi term that has inherent anti-semitic assosciations is deeply troubling. Considering the realaxed relationship the American alt-right and indeed to a lesser extent parts of the British right-wing press have with truthful reporting, it is pretty steep that they level this accusation. But whatever your political views, it's generally accepted that a free press is an essential ingredient for a democracy.
Words have power. It is so important to know their history so we can combat them.

Posted by Marie-Louise Jensen at 02:30

Such an important reminder of the politics of language - especially when we are repeating so many mistakes of the past. Thank you Marie-Louise

Oh dear. Worrying times. But a timely and crucial warning. I also thank you, Marie-Louise.