A Mini Greek Odyssey: Our Mythological Half Term. By Anna Mazzola 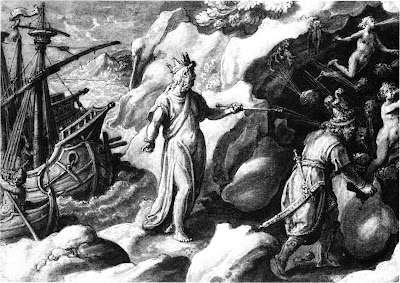 We had no real choice. We had to go to Greece. Some months ago, my eight-year-old son read the Percy Jackson series by Rick Riordan. Since then, his obsession with Greek mythology has become all-consuming. We receive daily quizzes on our knowledge of the Titans and the Gods. We’ve dressed up as Medusa and Perseus. When half term came, we could go only head for the Peloponnese and Athens.

In case you too are compelled to go on a Greek mythology holiday, I’ve set out below some of the places we visited, and some of the sites we intended to go to but missed due to the other important occupation of young children: spending lots of time on the beach.


The Acropolis, the famous rocky outcrop rising about the city, is not only where the last big battle in Riordan’s Blood of Olympus took place, but the site of the Temple of the goddess Athena, patron of Athens. According to the legends, it was on the platform beside the temple of Athena Nike that King Aegeus awaited the return of Theseus from slaying the Minotaur.


At the nearby Erechtheion you can see the site of the first ever olive tree, brought forth by Athena’s spear. You can also spend time finding the marks that Poseidon’s trident left in the rock.


The largest temple in Greece, which the Roman Emperor Hadrian dedicated to Zeus, leader of the Olympians, commissioning a statue of the great God, and of course one of himself. Only fifteen of the Corinthian columns still stand, but they give you an idea of its enormity.


High on the cliffs of Cape Sounio to the south of Athens lie the windswept ruins of the once majestic temple of Poseidon, God of the Sea. Built in around 440 BC, it may have been razed to the ground by Xerces, as punishment for the Athenians' defiance. Byron, being Byron, carved his name here. 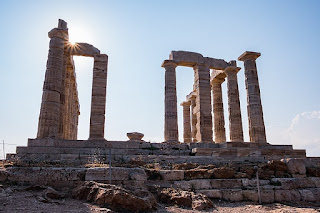 
In Greek mythology, the still-beautiful citadel of Mycenae was founded by the hero Perseus - son of Zeus and Danae, slayer of Medusa - who employed Cyclopes to build the walls of Mycenae with giant stones that no human could move. According to Homer, the place is named after the nymph Mycene, daughter of Inachus, king of Argos. 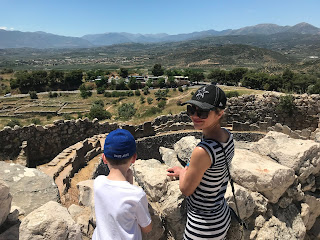 Don’t miss the Treasury, a beehive shaped structure that you can walk inside and which according to legend is the tomb of Agamemnon.


When Zeus released two eagles from opposite ends of the worlds, their paths crossed in the skies above Delphi, establishing it as the centre of the earth. From the 8th century BC onwards, people came from all over the ancient world to consult the Delphic Oracle – the words of Apollo spoken through a priestess, or Pythia.

It’s no longer possible to see the Oracle’s fume-filled cave in the ruins of Temple of Apollo, but it’s still worth asking for a few prophecies. You never know your luck. 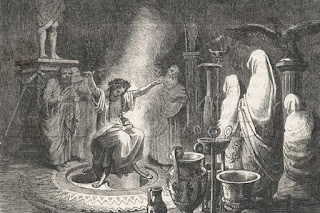 
The Sanctuary of Epidaurus was a healing sanctuary, dedicated to Ascelpius, God of Medicine. He is depicted in his temple here with a staff, a dog and a serpent. Ironically, it was in this sanctuary of healing that I fell down some steps and broke a finger.

Once you’re suitably dusty, head to the nearby Sunken City, where you can snorkel above ancient ruins, avoiding the less ancient sea urchins. 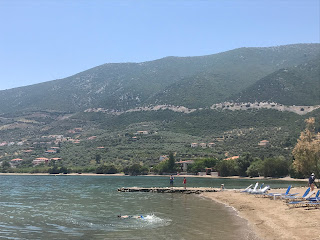 
After an afternoon at the stunning Voidokilia beach, I recommend climbing up to the cave beneath the castle. According to myth, Nestor's Cave is where Hermes hid the cattle stolen from Apollo. Nowadays, however, it seems to be mainly inhabited by bats. 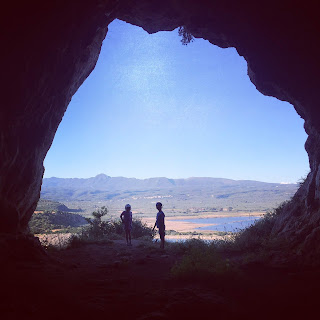 
Of course there are many more mythological sites in Greece – Delos, Olympus, Thebes, Knossos, Crete. If the mythology obsession continues we may be back there in the next year.

One last thing: while we were away, I read Circe by Madeline Miller. What a rich and marvellous book. If you haven’t yet read it, I recommend that you do. 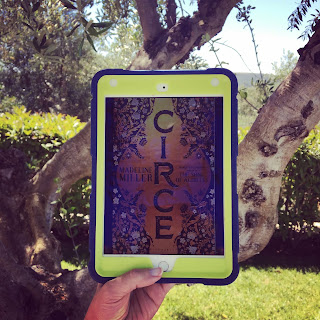 Featured image: Odysseus in the Cave of the Winds by Stradanus (possibly 1590-1599).

Perhaps Ascelpius so missed the availability of humans, he compelled you to fall and be injured only so he could practise his healing skills. One cannot understand the methods of the gods.