Shot at Dawn. By Judith Allnatt

Private Henry Burden, a Northumberland Fusilier, was shot at 4 a.m. on 21st July 1915 having been found guilty of desertion. He was just seventeen years old.

Like many young men keen for adventure and caught up in the patriotic rush to war, he had lied about his age in order to join up. Once sent overseas, he lost friends at the Battle of Belwaarde Ridge, experienced nerve shattering barrages of shelling and was sent to a military hospital to recover. On the same afternoon that he was discharged, he was sent forward with his battalion to the front line. Burden left his post, he said, to visit a neighbouring battalion to see a friend who he had heard had lost a brother. Two days later he was arrested and two days after that he was tried by a court martial. He had a record of going absent without leave, which went against him and he had no one to defend him as those who could have spoken up for him had all been killed. He wasn't asked about his age and he didn't raise it. He was found guilty, not of the lesser charge of going AWOL, but of desertion, and condemned to death.

In the British Army, discipline was harsh. The offences for which a soldier could be executed were many and various. They included: cowardice, casting away of arms, disobedience, striking an officer and desertion. Falling asleep on sentry duty could also carry the death penalty as it endangered a whole section of the line. Soldiers on duty at night stood with head and shoulders above the parapet, rather than using a periscope, so that they could get a good field of view. (There being less chance of being hit in the dark other than by a random shot). It was therefore very obvious, if a sentry slumped, that he had fallen asleep and those who did so were easily caught. Standing at their posts for hours, dealing with mind-numbing boredom and body-numbing cold, it was all to easy to be overtaken by exhaustion. Fear of the consequences resulted in the practice of using matchsticks to prop their eyes open.

Around 3,000 soldiers were executed for offences such as those listed. There is a strong sense of the authorities using the ultimate punishment to 'set an example', a stark warning to re-assert discipline. Before facing the firing squad, the soldier's General Service buttons were removed from his tunic as a mark of his shame. Blindfolded and manacled, he was led to a stake and a target such as an envelope was pinned to his chest. Often, the firing squad was chosen from the soldier's own unit, presumably to hammer home the lesson that breaches of discipline would not be tolerated. One can barely imagine the horror and mental anguish that this practice must have caused both the man and his comrades. Apparently, the traditional belief that one of the bullets used would be a blank so that each soldier was left with the moral let-out that his shot may not have been the lethal one, is actually untrue. The whole squad were, in fact, given live ammunition.

The man's disgrace often continued after death: there were relations who chose not to talk of the relative who had brought shame on the family and memorials in towns and villages that omitted their names. Not until the 21st Century, when it became clear that many of those found guilty had suffered what we now know as Post traumatic Stress Syndrome (PTSD) , was there any attempt to give them a memorial. 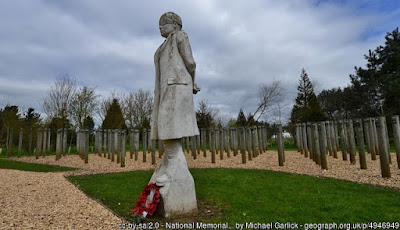 At the National Memorial Arboretum in Staffordshire, this shift in understanding and attitude found expression. The memorial Shot at Dawn, by Andy de Comyn, consists of a larger-than-life sized statue of Henry Burden, blindfolded and with his hands tied behind his back. Before him, the firing squad is represented by six juniper trees and behind him are an array of wooden stakes representing 309 other victims, each one individually named. These are the men who were posthumously pardoned by the British government in 2006. The pardons were granted not to imply blame for the officers who had acted in line with army regulations and without the understanding of PTSD that we now have, but in a spirit of mercy and in recognition of the battle trauma experienced by many, often very young men, and the suffering of their families. The Director of the Arboretum said that  "over 80 years of medical, psychological and sociological advantage (was) denied those who sat on the court-martial boards that passed sentence."

So, what of Henry Burden? As always, it is the small human details that suddenly pierce the heart. I think of his body taken down from the stake to be prepared for burial and the tattoos discovered upon it of "clasped hands" and "Love Lilly".  I am glad that his statue is placed at the eastern end of the arboretum where the sun's first rays strike.


At the going down of the sun and in the morning
We will remember them.

Terrible. A few years ago I went to Poperinghe, and saw the execution post there where people were shot for the 'crimes' you describe. Very chilling, very moving. I'm glad there's a memorial now. Thanks for this piece.

That's very moving, Judith - poor lad. And all the others like him. Thank you.