Writers of fiction set in the second world war are basically gold prospectors. We sieve endlessly through the dry dust of contemporary documents and records for the occasional, vivid, thrilling glint of gold.  If, like me, you write about German women in WW2, the task of finding that piece of contemporary colour is even harder, because everything about the Third Reich, it seems, is a male story. The politicians, the wars, the top-level meetings – all of them are dominated by men. As to the domestic and social side of life in 1930s Berlin, about which I write in my Clara Vine series, I have to rely on letters and magazines as well as the diary snippets of foreigners who visited and happened to mingle in high society.

So when a reader emailed me recently me with the offer of unpublished diary of his mother’s time living with the von Ribbentrop family in 1936, it was truly a golden moment.

Duncan K’s mother, Verona, was a bright girl from an ordinary middle-class family in Clapham, whose academic ability won her scholarship to Oxford. She took a year off to learn the necessary Latin, and as her school German mistress had a contact who was a personal friend of Frau von Ribbentrop, landed herself a job teaching the children of Germany’s ambassador to Britain.

Like many other girls of her time, Verona had already been to Germany on a school exchange and her autobiography reflects on the difference between English schoolgirls and their German counterparts. ‘I do not remember that we schoolgirls were at all averse to Kinder, Küche, Kirche – we rather envied the girls who only had to think about that. For their part the German girls envied us because they thought our men had better career prospects, ‘They have more chance, with the colonies’.’

Verona was in Berlin in August 1934 for Hindenberg’s funeral and recalled ‘every single window has a Hakenkreuz fluttering black ribbons and drooping in the wet.’ Interestingly she records contemporary German attitudes to Hitler’s recent  Night of the Long Knives. ‘The general idea of the shootings is that some of Hitler’s subordinates plotted to become top dogs and shoot him out of the way, which treachery he very astutely and necessarily nipped in the bud.’

In 1936, Verona was sent to live with the von Ribbentrops at their villa in Lentze-Allee, Dahlem, and ‘in their household I entered the world of embassies, rich business people, Nazi politics.’

The von Ribbentrops were great Anglophiles and famous for employing English nannies. Verona’s chief task was to act as a companion to von Ribbentrop’s daughter, Bettine, then thirteen.  ‘The baby is only seven months so he isn’t very interesting – his name is Adolf, a godson of Hitler’. Another son was away with the Jungvolk and the smaller daughter, Ursula, ‘Butzi’, spent her time with the nanny, so Verona and Bettine were together constantly.

They play tennis and swim. ‘She goes riding every morning, she is mad on horses and has pictures of them all around the room’. At the cinema, the Atrium, they see ‘Bettine’s father arriving at Croydon’ on the newsreel. 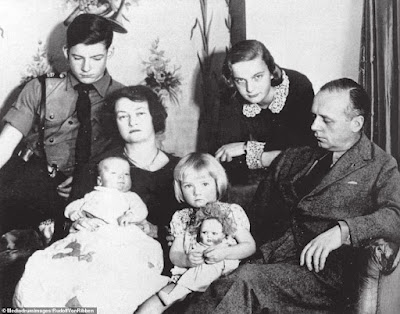 In those early days of the Third Reich, doubts about Nazism were quelled by thoughts of what might have been. The nanny tells Verona ‘lowering her voice to a shocked whisper’ that ‘before the Führer we were near to Communism. That’s what enabled old fashioned Germans to put up with the more distasteful aspects of Nazism, the feeling that they had been saved from the abyss, that standards were being observed again.’

Von Ribbentrop shows Verona a globe and spins it for her. ‘He said, You can’t get it so that there isn’t some red somewhere. It seemed quite natural to me that there should be a bit of British territory anywhere one cared to look.’

Frau von Ribbentrop ‘tall and graceful, used to come into the children in a beautiful pink negligee with wide sleeves’. She knits the babies’ vests ‘as her husband discussed politics with her.’ 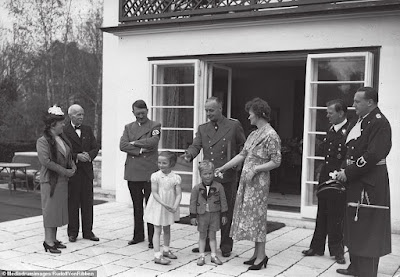 The most dramatic incident in Verona’s record of the time comes after a visit to the castle of the Duke and Duchess of Brunswick. She recalls, ‘all the surging around, people flying here and there to London, to Munich, telephoning everywhere, adjutants, secretaries, the big cars, all this was intensely exciting. Then Bettine and I in the back of the big open car singing The music goes round and round and suddenly I found myself leaning against a tree and Bettina was being carried moaning, her face covered in blood, and her legs hanging all limp and queer.

The car had crashed, Bettine suffered a fractured skull, and her father sent her a picture of the Führer and pineapples and strawberries for her recovery.

The joy of Verona’s autobiography, which extends to her equally fascinating time after Oxford, working abroad, lies in the writing. She has a natural diarist’s eye, and her enquiring personality shines through, even when recording the smallest detail, such as when the family eat ‘frankfurters in thick potato soup on the day when everyone was supposed to have a one dish meal and contribute money to some Nazi cause which I forget.’

After a stint in London, when he was made Ambassador, von Ribbentrop’s love affair with England soured drastically, and in 1939 he was instrumental in urging Hitler towards war with Britain. Even so, in the event of conquest, he still planned to take over Cornwall for his personal domain.

Jane Thynne is the author of the Clara Vine series, and also, under the pen name C.J. Carey of Widowland, just out from Quercus.

What a find! Am a great fan of the Clara Vine books, btw.

What a fascinating account and how wonderful it must have been reading Verona's diary.

I realise I'm rather biased but I particularly loved the detail of Verona taking a year off to learn the necessary Latin.

Great photographs, too. Interesting that in the first one only the women are looking direct at the camera. I wonder whether that is a little story in itself?