There really is no excuse, so I am going to come clean.  It's been so long since I posted on this blog that I had forgotten completely that it was my turn to write a piece for yesterday and I am grateful to the eagle-eyed Sue Purkiss for reminding me ....I have dropped everything and run to my laptop, desperately trying to think of something interesting to put into this intimidating expanse of white. I apologise for this lapse. Lord knows, there's been enough going on in the world over the last few weeks to make everyone forget most things, but I am not going to write about Current Events.

Rather, I'm going to put up a few photos of what I've been doing over the last six months: the time that's elapsed since my last post.

Apart from Covid news, which everyone knows and which I'm also not going to write about, this last six months has been concerned with launching a book in the middle of a pandemic, and trying hard to get back to work again on the novel that comes next.

So on March 4th, 2021 Dangerous Women, by Hope Adams (my pseudonym) was published. 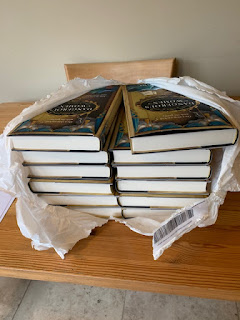 I had a wonderful bouquet of flowers from my publishers, Michael Joseph, and a very lovely Zoom Launch, complete with  tins of cocktails sent in advance. I had signed lots of tip -in sheets and stickers to go in the fronts of books, but when the shops opened on April 12th, no copies of  Dangerous Women were visible in Cambridge. Since then, I've seen one copy in Heffer's, (who had stocked five copies) but that's the only one I've seen in the wild. It's true that I haven't been around much visiting other shops but I hear it's  selling reasonably well, so I'm hoping that someone somewhere has seen it. All the reviews I know of seem to have liked it so I'm happy. And the paperback is due early next year, I think, with a different striking cover. I adored the hardback cover, too but the paperback is lovely in its own way too!

My mind is now turning to my second novel as Hope Adams. It's based on the work of the Scottish artist, Phoebe Anna Traquair. 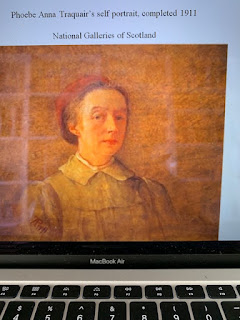 At first, I thought I would have the artist herself as a character in my novel, much in the same way that I put the read Kezia Hayter and Captain Charles Ferguson into  Dangerous Women, but I soon realised that because of the demands of my plot,  I needed to create a fictional character based on the artist, while using her beautiful work for my purposes in as faithful a way as possible.  The book will be set in Edinburgh in 1899, so I hope will have elements of the Gothic about it. Here is one example of Traquair's work: 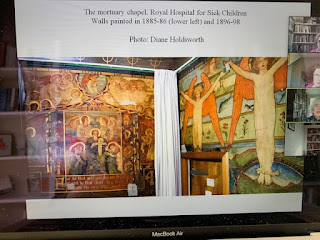 This is the Mortuary Chapel in the Royal Hospital for Sick Children in Edinburgh. Children figure large in my novel....I think. I have yet to write a single word though I've been planning for a very long time.

For the rest, I've had a very pleasant summer. In the Cotswolds, in a Spa where my daughters took me for a weekend, (last year's Christmas present!) along with my granddaughter....that was  real treat. I've looked after my granddog for a week, and kept on walking and reading and watching far too much television.  I've been up to London to  see Leopoldstradt by Tom Stoppard and that was lovely: a real pleasure to be in a theatre again.

I hope very much that the next time I write on this blog I'll have a more considered post to regale you with! I will put the date in giant letters on every calendar....