A few years I was assailed by middle age. As with so many others, it took the form of family history.

Being from Aotearoa New Zealand but having settled in the UK, I started by wanting to discover if there were any distant traces here that I could identify, any remnants of belonging. Everyone in my family had journeyed across the globe in the nineteenth century, in the fifty or so years between the 1830s and 1880s. All were from Britain. It seems that this was the country where they could no longer see a future. But what of their past?

I started to dig … which makes it sound like shovels in a cemetery in the dead of night. But perhaps family historians are indeed something like grave robbers, working the crumbling soil on the watch for gold? I laid bare lots of stories but today’s is about a man who carried a particularly memorable moniker, Thomas Horlock Bastard, esquire.

Born in 1796, in 1858 he married Sarah Vincent, the sister of my great-great-grandfather (who having left for New Zealand eight years earlier, was not at the wedding). It was a second marriage for the widower Thomas, by now aged 62. Sarah, even at 24 years his junior, was well past the typical marrying age; a spinster that no doubt everyone thought was securely settled on the shelf.

It was certainly a love match, or at the very least one of affection and respect. The wedding itself, performed by Sarah’s clergyman father at his parish church in Rowde, was a jolly affair. ‘The church was tastefully decorated for the occasion by some of the ladies of the parish’, says the newspaper report, and after the ceremony Sarah walked back to the vicarage along a path that the school children had strewn with flowers. The children also presented her with a Bible ‘as a testimonial of their respect and affection’, suggesting that Sarah taught at the Sunday School or was involved with their education in some way.

At one o’clock there was ‘a substantial dinner’ for about fifty of the older and poorer residents, comprising roast beef, plum pudding, and ‘plenty of good beer’.[1] This was provided by the bride herself. Immediately I get a picture of a woman who combined a sense of social duty with good humour, and a high degree of agency. It’s a picture that emerges when we also look at her husband, Thomas Horlock Bastard.

Blessed with a large house in rural Dorset and an independent fortune, Thomas took to philanthropy with vigour and commitment. Interested in a range of causes, his special province was education.

One outcome of this was his building and endowment of a strictly non-denominational secondary school in the nearby town of Blandford in 1863. Actively concerned to improve the status of women, Thomas originally proposed that the school be for girls only but was swayed both by the need to provide for local boys and the belief – surely way before his time – ‘of the advantages which are found to result from educating boys and girls together’.[2] The school was managed by a board of seven governors, two of whom had to be women and (in line with its non-sectarian policy) none of whom could be a clergyman. Utterly convinced of the importance of rational enquiry and knowledge, Thomas also required the school to teach economics and human physiology.

Thomas’s belief in the desirability – the necessity – of educating women also led him to provide Girton College in Cambridge with funds for two scholarships. In his own words: ‘in all institutions for socially and morally improving our condition, from the infant school to the college, and lecture-room, a great mistake has been made in separating the sexes, any more than in the ball-room or theatre’.[3]

Before founding Milldown School, THB had already in 1855 established a local labourers’ club: note the gender inclusive name. For once more in the teeth of opposition, and possibly uniquely, this was not a working man’s club but for both women and men. Designed to be a mirror of the London clubs that catered for the elite, it was a place of comfort and conviviality, with refreshments, newspapers, books and socialising. Significantly, the club was open every day, including Sundays.

That the one day of the week that was freely available to the working man and woman saw all amenities closed by law was anathema to Thomas. It left them only church and the pub, neither of which he saw as improving venues. He supported the National Sunday League, an organisation that from 1855 campaigned for Sunday opening of museums, libraries, galleries and gardens. Places like the British Museum, the National Gallery and Crystal Palace were on their hit list. 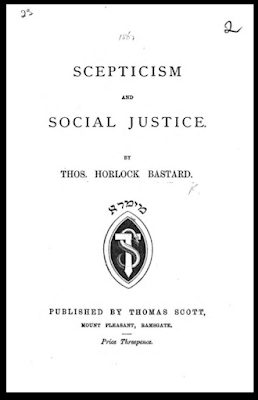 His secular, rational outlook found most eloquent expression in a pamphlet he published in 1872, Scepticism and Social Justice (digitised by the British Library).

In this he argued, secondarily, that the Bible was not a work of divine inspiration – it was both scientifically impossible and internally contradictory. His main point though was that sceptics – even if wrong – ought not to be discriminated against for their beliefs: people are entitled to freedom of thought.

Other ideas and causes to which Thomas donated time and money were eclectic and diverse: the Playground and General Recreation Society, committed to open-air play spaces for children; the Garibaldi Fund, supporting the unification of Italy; a women’s hospital in London, to which he and Sarah gave £200; the committee for the National Union for the Improvement of Education of Women of All Classes, to which both he and Sarah belonged (a mouthful of a title commonly shortened to the Women’s Education Union).

"For more than half a century his fresh and burly figure was constantly seen in London paying golden visits to the offices of some unfriended movement which he thought ought to succeed."[4] 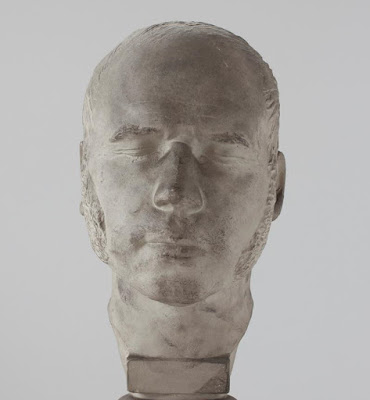 A plaster life mask made when Thomas was around 40 helps us see more clearly this ‘fresh and burly figure’, including his receding hair and splendid early Victorian sideburns. Currently in the collection of University College London, the subject is startlingly present, his eyes only momentarily closed. 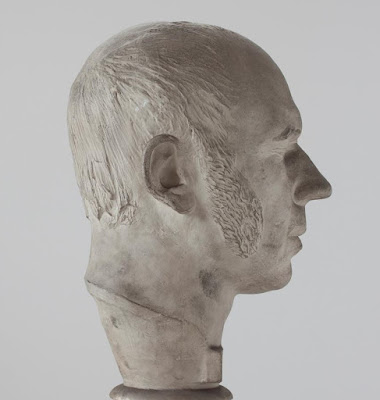 THB knew a lot of liberal thinkers. One of them was John Stuart Mill. They frequented some of the same clubs and causes, and after Mill’s death Thomas subscribed to memorial scholarships and a statue of the great man. Having recently read and been captivated by On Liberty, I am now as giddy as a groupie. It’s like the six degrees of separation: my great-great-grandfather’s sister married a man who knew J.S. Mill. How cool is that. 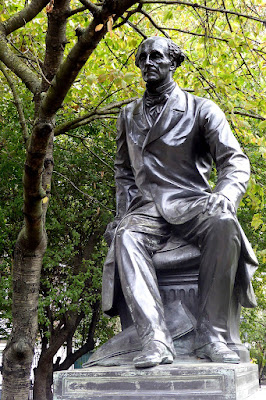 When Thomas himself died, George Jacob Holyoake – free thinker and a founding figure in the co-operative movement – wrote the following:

There was no reform which promises social or intellectual benefit which he did not promote. There was no change founded on reason of which he was afraid, nor was he afraid to support it. [5]

Who could wish for a better epitaph?

And one last memorable achievement. Although 24 years older than his wife Sarah Vincent, Thomas outlived her by over a year.

[6] Ibid, but widely reported in his obituaries and death notices.

What an admirable man! -- And I'd never heard of him before. He should be more celebrated.

I agree with Susan, (post above), I had never heard of him before either. He was rather handsome with strong features judging by the bust. How inspiring to discover you come from - OK, not directly - such fine-thinking stock.