The Secret of a Clear Head by Imogen Robertson

Sorry, I don’t really know what the secret is. Drink less? Sleep more? Retire to the woods with a lot of canned food and medical supplies and ride out the coming apocalypse among the forest creatures? Possibly. No, the click-bait title for this blog post comes from an advertising slip I just found in an old second-hand bookshop frenzy purchase. The book is Essays by Leigh Hunt, edited by A. Symons. And here is the slip: 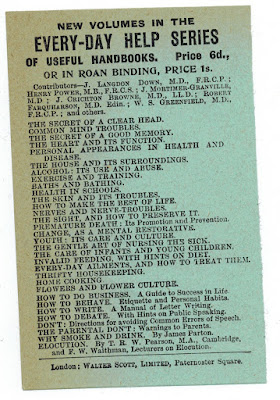 Thanks to the wonders of archive.org, I did read some of The Secret of a Clear Head and so can tell you that it has something to do with ‘true and worthy forms of gratification’, ‘the priceless virtue of patience’, and also share the news that ‘it is a convincing token of nothingness and emptiness to be without resolute purpose and lacking in energy. Such people are nobodies and have nothing to hope for.’

Do feel free to read the rest here while I continue to enjoy ‘the essentially low tone of morals which forms the key-note of social enjoyment.’ 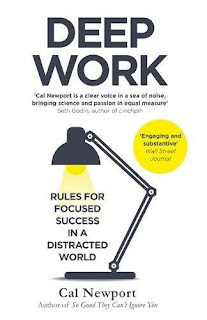 Actually, if you have come here in search of a Clear Head, I do have one recommendation. More than that it's one of those hissing-and-clutching-your-lapels-and-staring-wide-eyed-at-you-from-uncomfortably-close recommendations my friends and family have learned to love -  Deep Work by Cal Newport. It’s a possibly life changing book about valuing concentration and focus and switching off the distractions of the modern age. And if you can’t concentrate long enough to actually read it, you can listen to Newport discuss it on the Ezra Klein show while playing Candycrush and scrolling through your twitter feed for cat memes. I actually did that. Then I read the book and by following the advice I've doubled my daily word count, and even better it's been daily.

But now I'm ferreting about on the internet, so I had a hopeful look at Why Smoke and Drink from the Every Day Help Series too. Unfortunately it turns out to be an anti-smoking and drinking tract. So anti in fact it provoked this response: 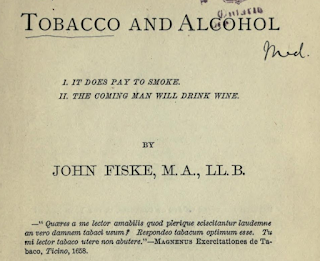 More appealing, but I think nowadays the scientific consensus is against both John Fiske and me.

Anyway back to the book in which I found the slip: Leigh Hunt was an essayist who introduced Keats to Shelly and was the model for Harold Skimpole in Bleak House.

Knowing that makes one read his essays in a different and harshly illuminating light, but they are pleasant, fanciful early 19th century easy reading. The introduction from Arthur Symons does some serious damning with faint praise though, saying ‘he is never quite without attractiveness’, which makes me a feel a lot better about some of my Amazon reviews. They are also full of certain turns of phrase and small domestic scenes which I think would make them a treasure trove if you are writing anything set in the 1820s.

I also noticed the address of the publisher, Walter Scott, was given as Paternoster Square. This pleases me as that the square was the centre of the publishing industry for centuries, so after a little light googling I can offer you the following.

1. This isn’t the Walter Scott. This Walter Scott was a wrestler from Cumberland who became a successful building contractor and then a publisher ‘bringing classic literature to the masses’.

2. As well as the ‘Every-Day Help’ series, and various elegant but keenly priced novels, essays and poetry, Walter Scott was one of the early publishers of Tolstoy and Ibsen in this country.

3. The short introduction to one of his Ibsen volumes was written by my great-great-grandfather, Philip Henry Wicksteed. 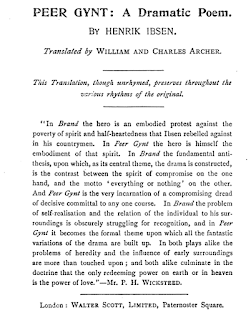 Now time to clear my mind, close all the open internet tabs and get back to the Deep Work with a Clear Head....

It's such a great book, Liz! I really recommend it.