My Favourite Research Books: An Occasional series by Elizabeth Chadwick 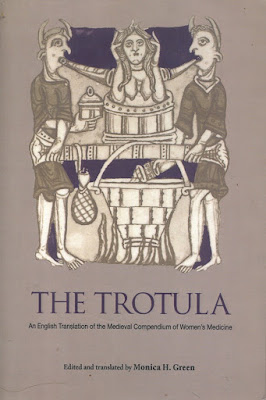 I have a few thousand research books on my shelves.  All are treasured, but if I had to take just a handful with me to a desert island, which ones would I choose?
This would be one of them.  The moment my characters become involved in a Medieval medical situation, I reach for the Trotula to give me insights.

Basically the Trotula is an ensemble of three works on women's medicine from  12th century Italy and reflects some of the theories, practices and medicines coming out of the Arabic world at that time.  As well as dealing with ailment specific to women, the Trotula also gives advice on child care and various interesting recipes for cosmetic beautification, one of which I used in my novel The Time of Singing.

But when she combs her hair, Let her have this powder. Take some dried roses, clove, nutmeg, watercress and galangal. Let all these, powdered, be mixed with rosewater. With this water let her sprinkle her hair and comb it with a comb dipped in the same water so that her hair will smell better. And let her make furrows in her hair and sprinkle on the above-mentioned powder and it will smell marvelously.

I also mentioned this one in passing, if the woman wishes to have  long black hair, Take a green lizard and having removed its head and tail, cook it in common oil. Anoint the head With this oil. It makes the hair long and black. I am quite tempted to try out the first one but I will leave the second for more adventurous souls!

This next one too is on my 'give it a miss for now.' list. For whitening the hair, catch as many bees as possible in a new pot and set it to burn, and grind with oil, And then anoint the head.
Should you want white teeth:  The teeth are whitened thus. Take burnt white marble and burnt date pits and white natron, a red tile, salt and pumice. From all of these make a powder in which damp wool has been wrapped Enough fine linen cloth. Rub the teeth inside and out.  I don't know what my dentist would think of that one!

As a complexion aid: for widening the face and clarifying it: take the juice of pignut , and mix steer or cow marrow with it, and let them be ground, and in these ground things add powder of aloe, cuttlefish bone, white natron, and dove dung. Let all these be ground, and let there be made an ointment. With this ointment. The woman should anoint her face.

One might be horrified until one starts to ponder the ingredients used in modern cosmetics. I just looked up the ingredients on an anti-frizz serum for hair and so chosen because it has the least ingredients to type out but I could find. I had no intention of copying the mile long list from a bottle of body lotion! The frizz-ease contains: cyclopentasiloxane, dimethiconol, ethylhexyl, methoxycinnamate, liquid paraffin (I've anglicised it) hydrolised silk and algae extract. Who knows - the chemical compounds involved in lizard extremities Could well be hidden in there. Nothing really changes that much. Today fish scales are used in the manufacture of glitter nail polish and lipstick.

Much of the Trotula is concerned with discussions of women's ailments in relation to conception and childbirth. The treatments are often very different today being based on different medical beliefs - although basic common sense is often spoken. However, it is probably not a good idea to use the following advice when considering contraception. Take a male weasel and let its testicles be removed and let it be released alive. Let the woman carry these testicles with her in her bosom and let her tie them in goose skin or in another skin and she will not conceive.

Alternatively, if one wishes to conceive, one should take take the testicles of a male pig or wild boar and dry them and let a powder be made, and let the woman drink this with wine after the percolation of the menses. Then let her cohabit with her husband and she will conceive.
Assuming this ploy is successful and conception occurs, there are certain signs to be watched for. In order to know whether a woman is carrying a male or a female, take water from a spring and let the woman extract two or three drops of blood or milk from her right side and let these be dropped into water. And if they fall to the bottom, she is carrying a male; if they float on top, a female.

There are comments concerning the development of the embryo. In the first month. There is purgation of the blood, in the second there is expression of the blood and the body. In the third month, the fetus produces nails and hair. In the fourth month it begins to move and for that reason women are nauseated. In the fifth month the fetus takes on the likeness of its father or its mother. In the six month the nerves are constituted.In the seventh month the fetus solidifies its bones and nerves. In the eighth month, nature moves and the infant is made complete in the blessing of all its parts. In the ninth month. It proceeds from the darkness into the light.
However, proceeding into the light can be a tricky business and everything doesn't go to plan Remedies suggested include having the expectant mother hold a magnet in her right hand. She should try drinking ivory shavings. Likewise, the white stuff which is found in the excrement of the hawk, given in a potion is good.

The Trotula understands the seriousness of a retained afterbirth and says haste must be madeTo reject it. Therefore let the sneezing be provoked, and let this be done with the mouth and nose closed. Alternatively, the woman should be made to vomit, again this would aid in bearing down. And emetic was to be made from the cinders of an ash tree mixed with 1 dram of powder of the seed of marshmallow.

The Trotula has some interesting things to say about the care of the newborn. It says its ears should be pressed immediately over and over again, so that milk does not enter them, or its nose when the child is nursing. The umbilical cord should be tied Three fingers from the belly, because according to the retention of the umbilical cord. the male member will be greater or smaller. The baby should be kept clean and all mucus secretion is wiped away. It shall be massaged all over and then bound in swaddling. If its belly and loins become too humid and oily, they should be left free to dry out. After breastfeeding, baby should be massaged. The next passage might also come from a modern childcare manual.
There should be different kinds of pictures, cloths of diverse colours, and pearls placed in front of the child, and one should use nursery songs and simple words, neither rough nor harsh words should be used in singing in front of the child.

Other headings in the Trotula's medical section deal with Sterility on the part of the man  a cure for Worms of the ears, what to do about pain of the intestine and itching and excoriation of the pudenda. While many of the remedies make one thank heaven to be living in the 21st-century, The Trotula is a fascinating window on the world of medieval medicine and an invaluable reference work on my research shelf.  Highly recommended.

That treatment for whitening teeth -- aaargh! My elderly and sensitive teeth twang on merely reading it.
And were there professional weasel castrators? Weasels are stroppy and vicious little, er, creatures and can't think they'd take kindly to attempts to capture and castrate them. Amateurs would retire bleeding heavily, I imagine.