A play about love, lust and flour - Michelle Lovric

Under our new regime, today should have a post by Joan Lennon. But Joan kindly lent me her space so I could introduce a piece about a fascinating historical project set in my own part of London, near Blackfriars.

I am honoured to be a part of the Living Bankside History Committee. One of my fellow committee members is Adrian Chappell, an artist, educator and researcher. Adrian has collaborated to create a play about one of the great historical debacles of the late 18th century: the dramatic burning of the Albion Flour Mill at Blackfriars. Albion-in-Flames will be staged in the last week of September, close to the historical site of the fire, as part of the Totally Thames Festival.

Adrian worked with playwright, historian, scientist and memoirist, Linda Wilkinson to create the play and this is her account of how Albion in Flames came to be.

“Who thought flour could be so interesting?”

A rather forlorn and lonely patch of land by the southern end of Blackfriars Bridge seems an unlikely place from which the Industrial Revolution was kick-started in London in the late 18th century.

Myself and artist Adrian Chappell have been investigating the history of areas that abut the Thames for some time. As a playwright and historian, London is my playground as it is his. We met many moons ago on a project in East London and have remained friends ever since. As colleagues, he does the talking and the images, I do the words. It’s a fun and fruitful relationship.

A couple of years ago we devised a prototype app about a walk along the Thames linking the two Tate Galleries. Arising from this we uncovered the depth of Southwark’s importance in the industrialisation of London: the story of one building in particular piqued our interest.

The Albion Flour Mill stood on the south bank of the Thames at 245 Blackfriars Road. Today the site is being redeveloped having been occupied until recently by the Daily Express’s HQ at Ludgate House.

As the traffic thunders by and the announcements from the railway station punctuate the air it is hard to imagine the presence and stately grandeur of this once impressive building as it sat directly on the river. 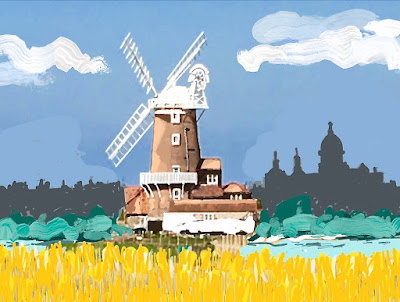 The Albion was the world’s first steam-powered flour mill and London’s first great wonder of the Industrial Revolution. Using the new steam technology, developed by pioneering Midlands’ based engineering company Boulton & Watt, the Albion Mill opened in 1786 and aimed to meet London’s ever-increasing demand for bread. Since the middle of the 18th century London’s population had grown from three quarters of a million to well over one million.

Albion’s creation was one of a long-list of firsts from that era but as a Londoner it surprised me that this mill was here, in my town, and not in the industrial North, the heartland of steam and steel.

Precisely because of its location in the middle of London, the Albion Flour Mill quickly became the talk of the town, attracting large crowds from home and abroad who watched in awe as the gigantic arms and condensers of the mill’s steam engines were winched into place. Steam was harnessed to power the millstones and engines for fanning, sifting and dressing wheat, as well as loading and unloading barges moored alongside on the Thames. 20 pairs of millstones could grind 10 bushels of wheat per hour, day and night. The owners were also determined that the modernity of the interior should be reflected in the external façade. The frontage was executed in an elegant neo-classical style with huge Venetian windows that made the Mill look like a well-appointed country house.

But not everyone was happy. London’s traditional millers (wind and water) watched in horror as this five-storey titan rose over the rooftops of Bankside and beyond. They were well aware of the blaze of publicity regarding the Mill’s production capability. It was said that the Mill could produce as much flour in a month as their own mills could in an entire year. 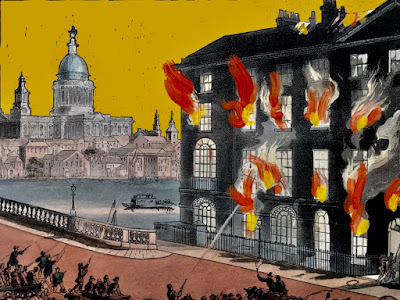 On the morning of March 2nd 1791, the Albion Flour Mill caught fire and burnt down. Foul play was suspected immediately, not least because of the quick responses with which London’s traditional millers greeted the news of the fire and the fact that the tide was so low the water boats could not pump onto the flames. The poet Robert Southey walked among the crowds that lined Blackfriars Bridge that morning and noted that there were groups of millers dancing with joy by the light of the flames. The sudden appearance of placards bearing slogans such as Success to the mills of Albion but NO to Albion Mill seemed to provide evidence that the occasion was pre-planned. However, while many speculated that the fire was the work of machine-breaking radicals, the cause of the fire was never firmly established. Samuel Wyatt, the Mill’s owner, and John Rennie, its youthful engineer, insisted that the cause was due to poor lubrication in the grinding mechanisms which created friction leading to the fire. It was known that corn dust was highly combustible. 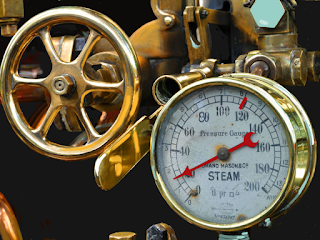 The charred remains of the Albion Flour Mill stood for 19 years on the banks of the Thames before Rennie himself built an iron works on the site. However, this was not before William Blake, who regularly walked over Blackfriars Bridge between his home in north Lambeth and the City, coined the infamous phrase that dark satanic mill.

We wanted to share this interesting and seemingly unknown history with a wider audience. As a playwright I thought I could potentially write a drama about it. Truth be told I am not very excited by pistons and engineering, imaginative or not, so I did wonder how I was going to turn it into an entertainment. Happily, as we delved further into the cast of characters who lived in and around Bankside during that period it became obvious that there was a provocative tale to tell. 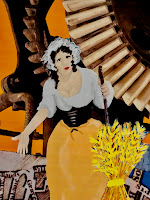 The play Albion-in-Flames interleaves the short history of the Mill and its owners with the contemporary events of the French Revolution and the loss of the American Colonies. The lives, and loves, of local luminaries such as William Blake, Dr Samuel Johnson and diarist Hester Thrale provide the dramatic backdrop to social unrest and the emerging feminism of the period. A future American President and amorous music masters enliven the proceedings and a working-class woman called Annie, speaking for the traditional millers, grounds the play in the reality of the times.

It seems fitting that the play is being staged at the Union Theatre just a stone’s throw from the site of the Albion Mills.

Albion-in-Flames is at the Union Theatre in Southwark 24-28 September 2019. The play is part of the Totally Thames Festival and supported by Southwark Council’s Blackfriars Stories fund. To find out more and book see below: 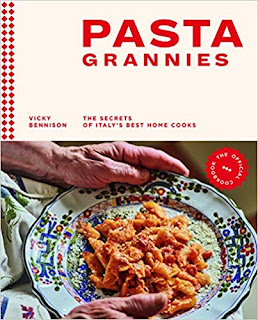 Finally, a piece of good news about the inimitable Pasta Grannies, about whom I wrote here back in 2017. I was privileged to interview Vicky Bennison who conceived the project and has spent years tracking down the Italian grandmothers who hold the secrets of the best home-cooking. Vicky has persuaded these fascinating ladies to share both their recipes and the stories of their lives.

The Pasta Grannies book is out next month. It's beautiful and I warmly recommend it, not just for the recipes but for the joyous photographs and the biographies of the nonne themselves.

The Pasta Grannies YouTube channel now has hundreds of thousands of followers, and you'll be seeing lots about the book in the media over the next few weeks.

How interesting! Am caught by the idea that the ruins of the mill inspired Blake's memorable phrase.

Best of luck with the performances!

Fascinating. I'd always imagined that 'dark satanic mills' referred to the various mills of the north and I'd never heard of the Albion mill.

Good wishes for the production, Michelle - and what a fascinating history of that particular spot. Must have been quite a sight, though the thought of anybody being inside the mill if air-borne flour dust did catch light must have been horrific. Blake's "satanic mills" comes alive in your account.

In this moment of our own crisis, watching a PastaGrannies video seems a very good idea. Hope the Grannies and their book do well.