Pompeii and me by Mary Hoffman

1987 - our first trip to Pompeii. We were staying, with our three daughters in Santa Maria di Castellabate, which is about one and a half hour's journey by road from Naples. We made the mistake of hiring one of the guides who tout for business outside the walls of Pompeii. Never do this. Read a book before you go and show yourself around and you won't have to stick to what the guides want to show you. Nevertheless, we were as impressed as everyone is by the rutted roads, the many shops, the wide forum.

We also climbed Mount Vesuvius and a strong young German plucked my five-year-old out of my arms and carried her on his back to the summit. I later discovered that husband and oldest daughter had expected to see bubbling red lava!

1989 - We found out on our previous trip that most of the good stuff from Pompeii was in the Archaeological museum in Naples. So on this, our second trip to Santa Maria, this time accompanied by my sister, we got the children up at 5.30am to catch a coach from the village square. The complaints got louder when we reached Naples and found ourselves, in summer dresses and sandals, caught in an absolute downpour.

I suspect the daughters remember best the huge breakfast we had on the top floor of the Jolly Hotel, overlooking the bay of Naples, allowing ourselves to dry out and warm up! But we did make in to the museum, which indeed is full of good stuff, including the partner to the Portland Vase in the British Museum, which they already knew.

And the frescoes from Pompeii are there too (I hope Blogger doesn't censor this one):

not to mention many mosaics and other artifacts.

1990 - back in Santa Maria, we decided on another crack at Pompeii and this time we waved the guides away and made it to the Villa of the Mysteries, which is what we wanted to see most last time and which wasn't on any guide's itinerary.


Scroll forwards an incredible nearly 30 years and 2019 takes us to the Last Supper at Pompeii exhibition at the Ashmolean Museum in Oxford. Do go, if you are anywhere within reach. It's on till 12th January 2020. You are greeted by the statue of Bacchus at the top of this post and you will find the wine god's influence everywhere in the exhibition.

For this is not yet another the-volcano-erupted-in-AD79-and-lots-of-people-were-killed-and-preserved-in-ash fest. It celebrates the living Pompeiians, who loved wine and food and fine art and who were happily carrying on their lives in a bustling Roman town until the fateful day. Bacchus is even featured alongside Vesuvius in a fresco in the exhibition: 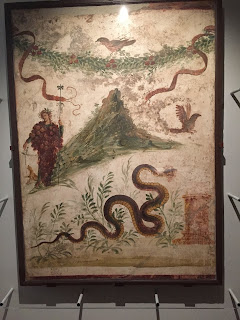 The people of Pompeii were very well aware of the volcano on their doorstep, much as modern Sicilians talk about Etna. So much so that it makes itself present in their art. The city was especially devoted to Venus and Hercules as well as Bacchus and it was fond of feasting and banquets.

Much of what we know of Roman daily and domestic life comes from the perfectly preserved utensils, vases, frescoes, mosaics, statues and indeed bodies of humans and animals from Pompeii. It was close to the coast and a famous mosaic celebrates the bounty of the sea that would have ended up in a typical Pompeiian kitchen. 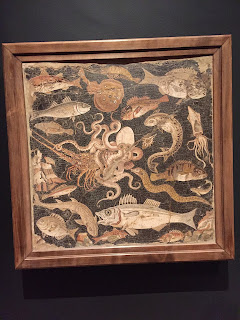 And there is the famous Roman predilection for "garum" or fish gut sauce, also represented:

I think this vegetarian would have had a hard time and a Pompeiian dinner party! Of course, there was always bread, of which a carbonised loaf is displayed and other food items. 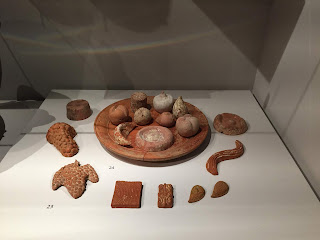 These simple objects speak to us over the centuries of daily life and ceremonial and religious occasions, of evenings of carousing and days of bargaining, shopping and cooking.

There is one preserved body, or cast, of a Pompeiian woman, but I chose not to look at it. As with Egyptian mummies, I try not to forget the actual humans who lived no matter how many hundreds or thousands of years ago, and accord them their due respect. But it will be fascinating to many, I'm sure.


[All photos author's own, except where otherwise indicated]
Posted by Mary Hoffman at 00:01

Going this morning! I've also been to Pompeii and the museum in Naples several times but it looks as though there will be stuff here I've not seen before.