Of Great Men by L.J. Trafford


Ancient Rome is awash with Great Men, particularly in the era of the Republic when Rome was conquering all in her path on her way to becoming a full blown empire.
So, I thought I would pay tribute to a couple of them.

The 3rd century BCE brought Rome a series of stunning victories one after the other. As Rome picked off such islands as Sicily, Corsica and Sardinia, it was inevitable that this would bring them into conflict with the other power in the Mediterranean: Carthage. Rome faced off Carthage in three separate wars, known as The Punic Wars. But as in the case of most series, the second one was the best. Because it was the one with the elephants.
Yes, it’s this second Punic War that features Hannibal, his elephants and one of the worst defeats Rome ever suffered at the Battle of Cannae.


Quintus Fabius Maximus Verrucosus was born in around 280 BCE. Verrucosus was a nickname meaning warty. Let us assume it was a cracker of a blemish given that Greek historian Plutarch felt the need to mention it 300 years later in his life of Fabius.
As well as having to carry around the name Warty, Fabius was also nicknamed Lambkin for his calm, gentle nature. Fabius Maximus might seem an unlikely man to face off Hannibal and his elephants but Italy was in somewhat of a panic after that ascent of the Alps and nothing else had worked so far, so why not give Warty Lambkin a go?

Fabius was given the title of dictator and handed the job of expelling the invading Carthaginians from Italy. If you’re expecting a series of fierce battles between man and elephant, think again, for Fabius’ tactics are rather unexpected; he decided to defeat Hannibal by not fighting him.

One can imagine the loaded silence that followed. The gaping jaws and shocked expressions as the general in charge of defending Rome from invasion announced that they would not engage the enemy in battle. Or as Plutarch puts it,

“(they were) convinced that he was a nonentity who was utterly devoid of warlike spirit.”
Ouch.


However, a man who has spent his life being called Warty Lambkin has a thick skin by necessity and Fabius stuck to his plan. He had his army follow the enemy but stay that little bit too far away to catch up with. His reasoning was that Hannibal’s invading force was not a large one and by the gods did his elephants need feeding. Fabius’ plan was to cut off supplies to the enemy and slowly wear them down, without actually fighting them.

We are told that Hannibal saw the shrewdness of this plan. He was alone in that one. Fabius’ own soldiers were soon raging against him. Not least after the Carthaginians went on a rampage destroying farm land. All except for Fabius’ own country estate which they cleverly left untouched. Unsurprisingly fingers began to point right at Warty Lambkin.

Matters did not improve for Fabius. At one point they had Hannibal’s army completely surrounded. This could have been decisive had the Romans not fallen for a terrible trick.

By cover of night the Carthaginians gathered up two thousand oxen. To their horns they fastened bundles of twigs and then set them alight. They then drove the cattle forward. To Fabius’ lurking Romans it looked uncannily like a massive torch holding army marching their direction. This became even more terrifying when the twigs burnt down to the oxen’s flesh, sending them wild and on the stampede. With the landscape rapidly catching fire the Romans were given sufficient light to see the rampaging, blazing bovine army heading their direction. I don’t think anyone can blame the Romans for legging it as fast as they could.

After the flaming cow debacle Fabius did manage to clock up some significant victories over Hannibal. Perhaps proof that his plan of depleting his forces had actually worked.

It was for this that Fabius gained yet another nickname Cunctator. Meaning the Delayer.

Known For:
For Romans Cato was the epitome of the Roman traditional virtues of self-restraint, resilience and hardness. Not that anyone, even in his own lifetime, wanted to emulate his example. For Cato took things to the extreme.
He boasted that he never wore any item of clothing that cost over 100 drachma and that he never paid more than 1500 drachma for a slave. When he inherited a patterned Babylonia rug he despised it’s luxury so much that he sold it off immediately. Though one wonders what he did with the money, perhaps he buried it or purposefully kept it on full display in his house to show his absolute restraint in not spending it.
He was heavily into farming but not the usual Patrician route of owning acres of land and letting the slaves work it. No Cato worked alongside his slaves in the same clothes they did in winter and in summer just in his underwear.


However, it was not enough for Cato to deny himself the pleasures of life. No, he wanted everyone else to as well. This was first inflicted on his household slaves who suffered various indignities and then in the education his son, which he undertook himself. He taught the young lad reading and writing and how to ride a horse. Which all sounds sensible until you get to the bit where Cato junior’s education included how to endure extreme heat and cold. As well as becoming such a good swimmer as to be able to cross a hazardous river. You have to wonder how many failed attempts the bedraggled boy suffered on route to his success.

Still Cato itched for his way of life to be taken up further beyond the perimeters of his land. So, he decided to stand for the post of Censor. The main role of the Censor was to make a census of all Roman citizens and review the ranks of the Senate. Essentially this was to ascertain the size of the army and the taxable population. But it also involved accessing the suitability of men for inclusion into the ranks of the Senate.
Nobody could pretend they did not know what Cato was going to do with this power. Part of his canvassing involved standing on the rostra and crying out:

“that the city needed a thorough cleansing and insisted that if they were sensible the people of Rome would choose the most forceful doctor.”

He declared that he would be:
“cauterising the Hydra like diseases of luxury and effeminacy.”

The people of Rome decided they liked this, and duly elected him. Cato soon got to work expelling those he thought unsuitable from the ranks of the Senate for such crimes as daring to kiss their wives in broad daylight!

He then turned his attentions to the general population by increasing the value of such items as clothing, jewellery and utensils to increase taxes and discourage people from living a luxurious utensil heavy life.

Though this made him hugely unpopular with those wedded to their utensils, he was surprisingly popular with other slices of society. So much so they put up a statue dedicated to his censorship, the inscription read:
“When the Roman constitution was in a state of collapse and decline he became censor and set it straight again by effective guidance, sound training and sensible instruction.”

Conclusion
So what can we conclude by studying two Great Men of the Republic?
1) Having an unique name is not necessarily a hindrance to success.
2) Cows are scary in the dark.
3) Everyone likes to sock it to the utensil owning class.
4) Steadfastness; whether it be in the values of your values or the rightness of your plan, is a trait admired by Romans

L.J Trafford is the author of the Four Emperors Series set in 69 AD. 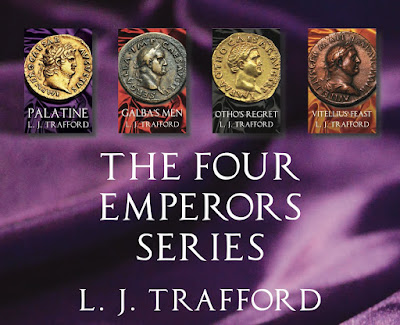