At the end of September I met my New Zealand friend, Ismay, in Bordeaux. With my husband as expert driver, we were about to embark on a long planned research trip, looking at Romanesque churches, searching for carvings of bicaudal mermaids and what are euphemistically known as exhibitionist figures. 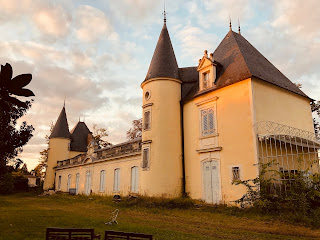 We were staying for a week in a gite adjacent to a chateau and surrounded by vineyards.  The chateau was a shell. During the war, it had served as temporary head quarters for the 2nd SS Panzer Division, Das Riech, infamous for their brutal massacre of the inhabitants of Oradour - sur - Glane.  During their time in the chateau, they had emptied the cellar and smashed every single item in a thousand piece collection of china. They had despoiled the place so thoroughly that the family did not return until 1989.

We set out to explore the villages around, looking for Romanesque churches, on the hunt for bicaudal mermaids. I've written about bicaudals before on this blog, so I won't expand on them now. Suffice it to say that, much to our delight, we did find them, proudly displaying their two tails, on arches and corbels. 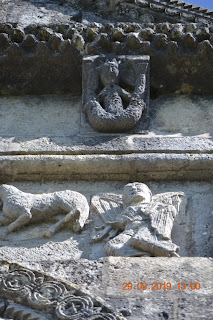 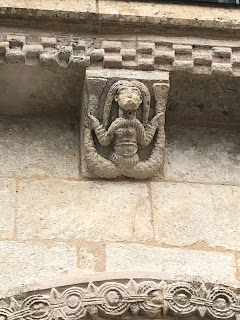 We were also looking for their sisters, female exhibitionist figures, also known as Sheela na gig. These figurative carvings of naked women boldly displaying themselves are found on churches and castles all over Europe, from Ireland (where they acquired their name) to Italy and Spain.

Male figures are often to be found close by displaying their genitals.

There is disagreement among scholars about almost everything to do with the Sheela na gig and their continental counterparts. Their purpose, their origin, the etymology of the name itself are all hotly debated. The traditional view was that they were a warning against lust and the sins of the flesh, although it's hard to see them as in any way erotic. They were often placed above liminal spaces, windows and doorways, so they may have had some apotropaic function, to ward off evil, to guard and protect, perhaps specifically for the women of the community as they entered these portals for weddings, baptisms or churching after childbirth. They are also found in different cultures that have nothing to do with European Christianity. This is a Maori image from New Zealand.

One of my favourite theories comes from Ireland and draws parallels between the sheela na gig and the ancient Irish myth of the goddess who granted kingship. She would appear to prospective candidates as the Loathly Lady, a hideous hag, rejected by all except the one true king. When he slept with her she transformed into a beautiful maiden who gave him his crown and blessed his reign.
We found what we were searching for in the small, ancient and isolated church of Monbos. 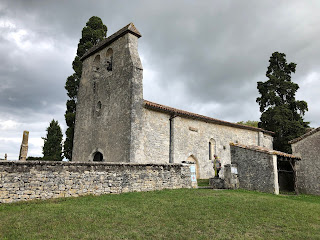 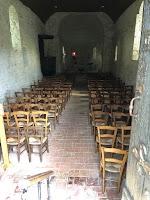 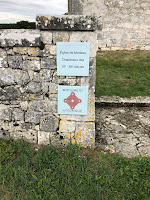 In the apse, at the far end of the small, dark church, were a number of pillars with carved and painted capitals. They showed foliage, vines and wheat ears, animals, hunting scenes, both male and female naked figures and a couple copulating. The effect was strongly pagan and seemed to me to confirm one of the other major theories relating to these figures: that they are pagan in origin and are to do with fertility.
There is no doubt that even to modern eyes they appear shockingly rude and seem to have no place in or on a religious building. Yet they have not been removed, they have survived the centuries, so they must have held importance for the people who gathered there to worship.  We can never know the true meaning of these images, or what belief lay behind their carving, or what was in the minds of those who worshipped in the churches where these figures display themselves. Did they really gaze up at them and reflect on the dangers of lust, the sins of the flesh and the prospect of eternal damnation? On the contrary, these figures look celebratory to me. Proud in their nakedness, shame-less, celebrating life and the natural abundance of field, vine and forest.

My belief that these images are essentially pagan and part of what might be an extremely ancient tradition was confirmed by a visit to the Musée d'Aquitaine in Bordeaux. Practically the first thing I saw there was the majestic and wonderful Venus of Laussel. An unassailable celebration of the feminine, she is approximately 25.000 years old. She is painted with red ochre and in her right hand she holds a crescent moon, marked with the thirteen lunar cycles. She has large breasts, ample hips and her left hand points to her vagina. She is an unambiguous celebration of the divine feminine and was found carved onto the wall of a rock shelter at Laussel in the Marquay area of the Dordogne, less than 50 miles from Monbos.