Close Up and Personal: The Hairdresser in History 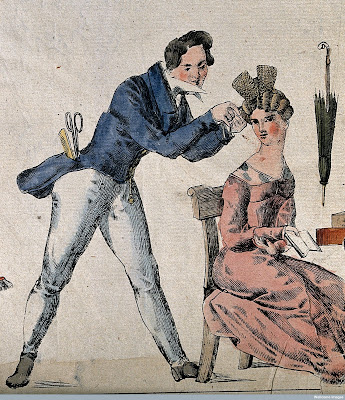 This morning I stood in front of the mirror and tried to cut my own hair. As the weeks bite down and our locked-in lives drag by, I’m losing my definition. My short, sharp bob is shaggy and blurred, and my fringe hangs heavy. My hair is doing me no favours and I miss my hairdresser.

But it’s right that I’m not allowed to see him, both for his sake and my own. Hairdressing is close up and personal.

For better and for worse, hairdressing has a long history of being an intimate undertaking. Let’s take the bad stuff first. Being in close proximity to one another, a client and stylist share everything: body odours, the smells of each other’s breath, the hygiene of their hands, and the infections they pass between them. In 1744 for instance, Alexander Hamilton, a Scottish-born American, noted in his journal the ‘stinking breath’ of a barber in Philadelphia: ‘it almost made me sick’.

For this very reason, his compatriot Benjamin Franklin advocated self-shaving. In this way a man could avoid ‘the dirty fingers or bad Breath of a slovenly Barber’. More often though, such sentiments were rendered visually, cartoons and satires picturing for humour what everyone knew from unfunny experience. In this detail from Henry Bunbury’s Damn the Barber, you can see the client’s distaste as the barber’s fingers travel over his face, squeezing his nose and pushing to get the right angle and the skin taut. 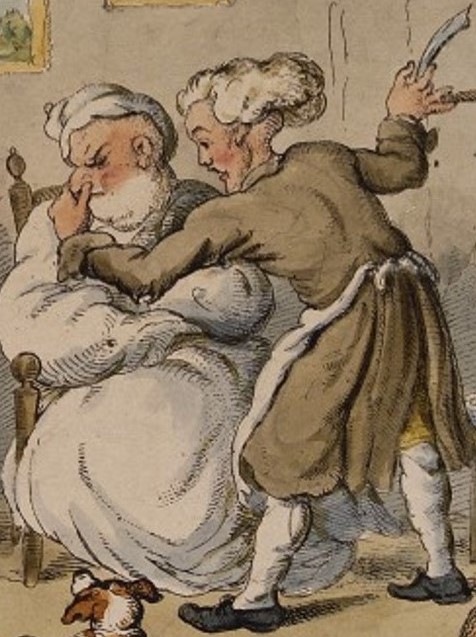 The training standards of the modern profession are explicit about body care and cleanliness, though we’re all only human and our bodies betray the best of us. According to one celebrity hairdresser, spare deodorant is always kept in the loos, you can’t be in the job if you suffer from sweaty palms, and a stylist can use a hairdryer to discreetly waft away those accidental farts.

So these consequences of intimacy are unpleasant, but what about those that are painful or dangerous? Gossip did the rounds in the 1770s when Ann Barry, a Drury Lane actress, literally kicked her hairdresser down the stairs for ‘catching hold of her ear, in a hurry, with the hot pinching irons, instead of her curl’. Like the discomforts of barbering, this was a common enough experience that it was featured in satirical prints. The detail here, from Sketches in a Shaving Shop, shows a customer yelling in anguish as his inattentive barber pinches hard on his ear with the heated tongs – more branding than styling. 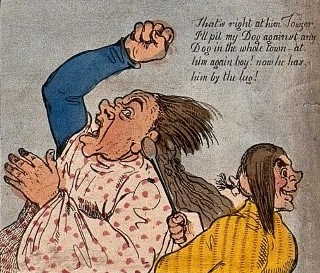 Or closer to home chronologically, on that auspicious moment in 1957 when the hairdressing genius Vidal Sassoon first cut the hair of designer icon Mary Quant, he also cut her ear. This is a perpetual possibility in hairdressing, and ears bleed a lot. As one stylist describes it having nicked a client: I ‘ask my junior to run and get a tissue – tissue? Who am I kidding? You need a bloody Andrex factory to deal with a cut ear.’

With scissors and open blades constantly snipping, passing near the eyes, over the throat, at the neck’s nape, the potential for harm is astonishing. It’s no wonder that Sweeney Todd, the demonic (and fictional) barber of Fleet Street, has become a permanent fixture in our imaginations. 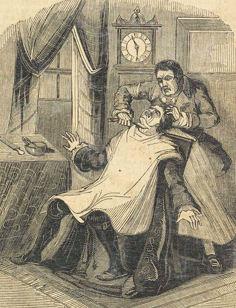 Fortunately for us all though, the intimacy between a hairdresser and client is usually experienced positively. People put their trust in their stylist, and once they have found someone they like, will often go to considerable lengths to remain loyal. Let’s face it, we hardly ever get to see the same doctor, but we nearly always insist on our own hairdresser.

The established relationship, the trust, the touch and the grooming, all work to lower levels of reserve and further the work of intimacy. One way this is experienced is in the sharing of secrets, and many hairdressers self-identify as counsellors and life coaches for the people sitting in their chairs. But they also identify as raging gossips, a stereotypical character that has been ascribed to haircare professionals for hundreds, and maybe thousands, of years. (There’s a Roman joke about the garrulity of barbers.) As one woman warned in 1787, hairdressers,

having access to the ladies, frequently hear things in one house, which they carry to another. Ladies are too apt to converse with these fellows, and ask questions; and, for every piece of intelligence they communicate, they are rewarded with news in return; so, that many women are as much diverted with their slander, as embellished by their art.


From sharing – and spilling – secrets, it’s but a short step to an even more intimate relationship. The physical closeness of hairdressing and its pleasures of touch have also a long history of leading to sex. In his autobiography Sassoon wrote candidly about the liaisons that arose from proximity in the salon. At one point he held a staff meeting to address the problem of the stylists’ ‘overactive libidos’ and their dating of customers. ‘It was not quite ethical’, he suggested, ‘to seduce a married client’. In his memoirs, another stylist puts it both more memorably and more distastefully: ‘I was shagging half my clients. It was a great way to meet loads of up-for-it women. What better job for any young, healthy male with a voracious appetite for totty than to get intimate with twelve women a day?’

Once more, these ideas and stereotypes are found in visual sources from earlier centuries. Take a look at The Boarding-School Hair-Dresser, for instance, from 1786. The teenage girl sits with her legs apart, straddled by the hairdresser. She smiles with pleasure as he concentrates intently on the task in hand. 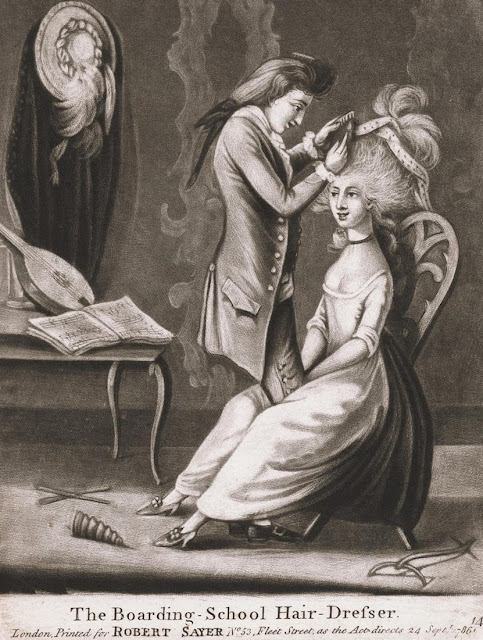 Or what about A Hint to Married Men, a satirical print from 1794. Here the action takes places in the lady’s bedroom, as would most hairdresser home visits at the time – you can see the bed on the left. Apart from the location there is little in the image that is saucy or suggestive, but the accompanying verse makes for no doubt:


Ye Husbands who wish to live peaceable lives
Neer admit a Frizuer to the rooms of your Wives
When the Lady’s in disshabille, & a bed’s near
There is often two methods of dressing the hair 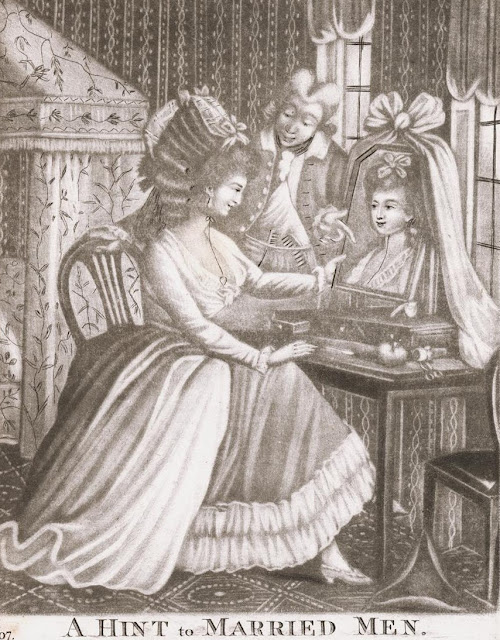 The last image is the most risqué. A Hint to the Husbands, or, The Dresser Properly Dressed was printed in London in 1777, at the height (pun intended) of the big hair craze and the Macaroni fashions that are exaggerated here for comic effect. The older husband, dressed conservatively in a rather old-style outfit, bursts in on his wife while she is having her elaborate hair arranged by her young, handsome and fashionable hairdresser. Note the long and doubtless phallic pin she holds between her fingers. Behind the husband an amused maid raises her fingers to form cuckold’s horns, while on the wall at the back hangs a portrait in which the female sitter is suggestively slipping her hand through her skirts. 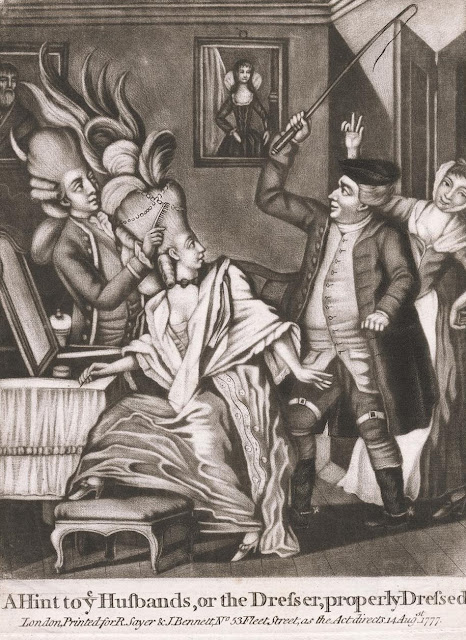 And for a modern take, what about the following? 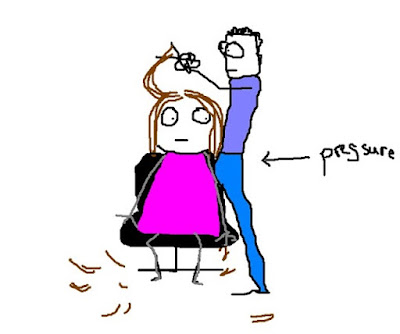 So, hairdressing is certainly close up and personal. The relationship is – and always has been – occasionally dangerous, sometimes titillating, and almost always trusting. And for now, I’ve no option but to keep snipping at my fringe while my untended bob grows ever longer. But at least we’re spared the experience of poor Lady Sackville – not to mention poor Lady Sackville’s stylist – who in 1788 ‘expired as her hair was dressing – and without serious illness, to be sure, else they would not have been in public, or her hair dressing!’

What a wonderful post, Susan, thank you! It resonates so much, particularly in these strange times. I am intrigued by the Roman joke... a lovely example of us being able to relate to daily life in the ancient world and how some things never change! Is there more detail about the Roman reference in your book? I am about to order a copy and very much look forward to reading more. Best wishes, Caroline