As an art student way back in the 1970's I used to draw a lot in charcoal. It came in small white boxes, labeled 'Willow Charcoal' , but at the time I never really questioned where the charcoal came from or what it was. Later I used charcoal briquettes at family barbecues, and even ate charcoal biscuits when I had an upset stomach on my travels in India. Charcoal in England has a long history and is somewhat of an art form in itself, so here are a few pointers to this lovely craft.


Charcoal History
The earliest examples of animals drawn in charcoal can be found in the Lascaux Caves, which date to approximately 15,000 BCE. Early Egyptians developed techniques using charcoal for writing on papyrus, and the Phoenicians discovered the antiseptic properties of activated charcoal and began using it to purify their water. A well known practice for any long sea voyage was to store water in barrels that had been charred.

Charcoal has been used since earliest times for medicinal purposes, such as aiding digestion, and as a tooth cleaner before the invention of toothpowder and toothpaste. In the 17th Century physicians used poultices made from charcoal and bread crumbs, or yeast, as well as giving patients charcoal powders to treat ulcers, acidity in the stomach, and nosebleeds.

In early crafts, charcoal was the traditional fuel of a blacksmith's forge because it burns much hotter than wood or coal and an intense heat is required to forge iron. Traditionally this craft was particularly common in the iron industries of the Weald, Forest of Dean and Lake District. In warfare, charcoal was also extensively used in the production of black powder, an ingredient of gunpowder, and more recently, fireworks. 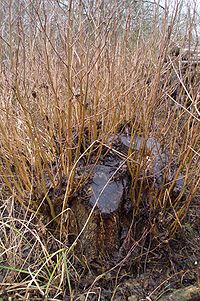 The Trees used in Charcoal Making
Apart from willow, hazel and other softwoods from our native woodlands, Alder traditionally makes the best charcoal, and used to be used in gunpowder because it can be ground down very finely. Ash is usually set aside for firewood. Coppiced oak was frequently used, leaving the sturdier limbs for crafts like boat-building. Charcoal for fires was prized because it produced no odour or smoke and little ash, and had the advantage of providing intense heat, and long burning hours.

Coppices
In years gone by, coppicing was a way of managing traditional English oak woodlands. The coppicing allows trees to put out new shoots from their stump. A coppiced wood was called a copse. In a copse, as well as charcoal, the bark he oak would be stripped for tanning leather, the long thin shoots used as poles for fencing, and the brushwood collected to make faggots or kindling for lighting fires. Oak would be coppiced every 16 – 20 years. In 1808, in the Teign Valley,  a coppice would fetch between £15 – £20 an acre. The bark would command a price of one shilling a hundredweight and the charcoal about 2 shillings a bushel.

The Method
A core of brushwood would be tied to thick stake known as a ‘motty pin’ or ‘mottle peg’. Poles would then be stacked leaning in towards the centre and forming a cone a bit like a teepee. This was then covered with dampened turf. Holes were left to allow a draught to 'draw' the fire once it was lit.
After that, the central stake was taken out, and the stack fired. The whole thing would then be sealed up, leaving the wood to slowly carbonize, a process which could take several days. When the pile showed small wisps of blue smoke, the charcoal was ready, the fire would be doused, and the charcoal taken out for use.

If you want to know more about charcoal burners, and watch a video of the traditional craft of charcoal burning today, you can find it here. 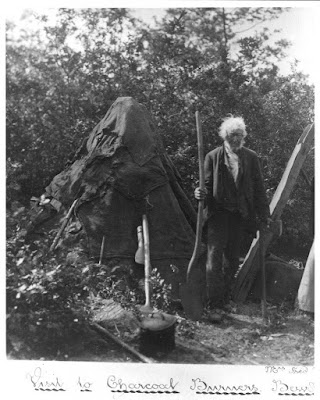