In the Ghetto by Mary Hoffman

In Autumn 2019 I spent two and a half weeks as Writer in Residence in Venice, invited by the university (Ca' Foscari) and its Center for Humanities and Social Change. My task was to write a book for children, treating themes of climate change and cultural diversity and having a connection to Venice itself. As time went by, I discovered I must also link this novel in some way to Edmund de Waal's installation, psalm, which was in the city at that time. Psalm came in two halves, one in the Jewish Museum and one in the Palazzo Ateneo, where I took part in a Symposium called Library of Memories. So now I had to add the themes of exile, loss, identity and memory.

Like everyone else, I knew de Waal from his wonderful book, The Hare with Amber Eyes, which traces the fortunes of his ancestors in Odessa, Paris and Vienna.
I re-read it before meeting him and was struck again by the poignancy of the loss of his great-grandfather's library in the Anschluss in Vienna. The Gestapo just burst into the luxurious apartment on the Ringstrasse and took everything: old masters, clothes, furniture, bibelots, jewellery as well as books. Well, not quite everything, because a maid, Anna, hid the family's collection of netsuke under her mattress and it survived and came down to Edmund from his great-uncle who lived in Japan.

That lost library is one of many behind the idea of the installation in the Ateneo. A large white cube with the names of all such book collections scribbled on the sides housed a library of books written in or about exile. 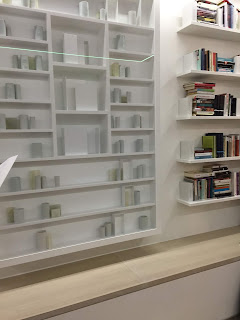 Alongside the books were four vitrines filled with de Waal's signature white ceramics. There were more ceramics too in the Jewish Museum, which is in the original Jewish Ghetto in the north of the city.


(There are two ghettoes in Venice: the Nuovo (new) and the Vecchio (old). Almost needless to say, the "new" one is older than the "old" one!)

The first Ghetto in Europe was instituted on 29th March 1516 when the Government of Venice issued special laws.  It was an area where Jews were forced to live and which they could not leave from sunset to dawn. The area was closed by gates watched by guards and to the present day the marks of the hinges are still visible there. The Ghetto continued for more than two and a half centuries, until Napoleon conquered Venice and finally eliminated every gate in 1797.

Edmund de Waal describes it thus: "The Ghetto is a place of connections, a place of plurality of languages and cultures: of German, Flemish, Persian, Ottoman, Spanish and Portuguese Jews alongside Italian. This was a place of constant translation, a testing ground for comprehension and nuance. It was noisy with learning, debate, poetry and music. It should be again. Everything is plural here, one history reaching out to another, a palimpsest of voices."  (guide to psalm, Venice 2019)

The Jewish Museum of Venice, where one part of psalm was displayed, was set up in 1955, having previously been a synagogue. From the Canton entrance, you can look down into the old synagogue. de Waal says," This installation, Tehillim – the Hebrew word for psalm – consists of 11 vitrines, each one holding a thin sheet of gilded porcelain of almost unimaginable fragility and a piece of translucent white marble. It is a call-and-response between materials. It is made to catch the reflected light from within the dense and dark goldenness of the synagogue itself." (Guardian, 24.04.2019) 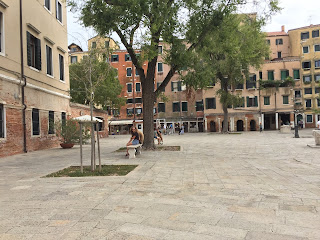 During my residency in Venice I spent a lot of time in the Campo de Gheto Novo, as it's called in the local dialect. It is one of the biggest squares in the city, after San Marco, and practically the only one without a church. It has three wells, a water fountain, eight marble benches and - unusually for Venice - about half a dozen mature trees. Some people find it sad, thinking of its history of repression and containment of a population, but I find it peaceful and a good place to reflect.

It was inevitable that it would find a place in my novel. It is where the two main characters meet:  a Muslim boy and a Jewish girl. He, having escaped from a capsizing boat in the Mediterranean and corruption in a refugee camp, is in search of a new future. She, adopted as a baby, is more interested in the unknown past. The Ghetto is a place of connections.

The other half of de Waal's installation was also productive of ideas. The Library of Exile contains books from fifty-two countries, two thousand titles "written by those who have been forced to leave their own country or exiled within it." It commemorates the lost libraries of the world, "from Ninevah and Alexandria to the recent destruction of Sarajevo,Timbuktu and Aleppo and Mosul." And of course the library of Viktor Ephrussi, Edmund de Waal's greatgrandfather, plundered  by the Gestapo.

Like Edmund de Waal, I have a Jewish greatgrandfather. Not a banker with a twenty-four room apartment in  Vienna but a farmer from Heildelberg. Georg Hoffmann bequeathed me my surname , give or take a letter, and very little else. Certainly not his mother tongue, but maybe my fascination with languages and words, with etymology, semantics and grammar.  I doubt he had a library to plunder. But by 1938 he was long out of reach of the Nazis; he had emigrated to England, married an Englishwoman and never returned to his native home. He was luckier than Victor Ephrussi because, although he had far less to lose, he kept what he had.

"This library celebrates the idea that all languages are diasporic, that we need other people's words, self-definitions and re-definitions in translation. It honours the words of André Aciman, himself an exile from Alexandria, that he understands himself 'not as a person from a place, but as a person from a place across from that place. You are - and always are - from somewhere else.'" 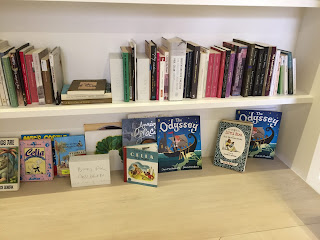 This part of the installation, The Library of Exile, left Venice at the end of September last year and travelled to Dresden. When it closed there it came on to the British Museum in London, where it opened on 12th March. I went to the private view on 11th, when we were all still able to embrace without fear. The British Museum, The Library of Exile and its associated programme of lectures and workshops, all closed a week later.

We are now, so many of us, living "in exile in our own country." Quarantine gives us the smallest taste of what real exile is like.

The Library of Exile's ultimate destination is Mosul, which lost its library just over five years ago, when it was blown up by ISIL, destroying 8,000 rare volumes and manuscripts. But for the moment it sits in lockdown inside the British Museum.

My book sits at a publishers' office in London. Exile is a form of Limbo. We are all on pause, waiting for the new enemy to be defeated. Like Siddiq in my novel, we are hoping for a new future.

Fascinating, Mary, and much for us to ponder in these uncertain times. The Campo de Gheto Novo looks so peaceful and how interesting about the (unusual) presence of mature trees there. Of course the copies of Homer's Odyssey in your final photo caught my eye! So many parallels across the ages...

Lovely as ever to hear about Venice, but so sorry about your new novel and the locked-away exhibition.

Your mention of the New Judecca's curfew gates made me think about Shakespeare's play - and the reasons for Shylock's anger - even more. To have one's only daughter stolen away when you were forbidden from travelling freely through the city seems even more of a hurt.