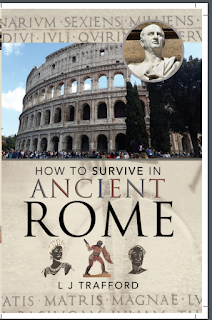 Back in 2018, a very different world to the one we are living in now, a publisher asked me whether I would like to write a non-fiction survival manual about living in Ancient Rome. Part travel guide, part self-help book How to Survive in Ancient Rome was to feature 14 separate topics covering just about every aspect of ancient Roman life.
I was charged with being ‘engaging’ and writing a book that was ‘lively’.

After pondering for a good 27 minutes, I accepted this challenge and set forth to find as many interesting facts about ancient Rome as I could possibly squeeze into a lean 50k words.
I thought for my History Girls piece this month I would share a few of the gems I discovered whilst doing my research, because they are just too good to keep to myself.

FACT ONE
Eating cabbage before knocking back the vino will prevent intoxication.

So, Pliny the Elder tells us. Cabbage for Pliny is an all-round wonder drug, as he himself says, “It would be a lengthy task to list the good points of the cabbage.”
To summarise, cabbage is good for headaches, impaired vision, spots before the eyes, the spleen and the stomach. An application of pounded cabbage also helps heal wounds.
Oh and it is a cure for hypochondria as well, presumably for the reassurance that it can miraculously cure whatever ailment you think you have.

FACT TWO.
Pet eels were all the rage.

The politician Marcus Licinius Crassus trained his eel to come when called & take food from his hand. He also adorned his beloved pet with earrings & necklaces like a 'lovely maiden'
Crassus was far from alone in being a lover of our aquatic friends. Fish ponds were all the rage and Romans could become excessively devoted to showing them off. Something that Cicero, who has clearly sat through one too many dinner party discussions on eel training, is most scornful of, calling them ‘fish fanciers’.
A term literally applied by Crassus to his lovely maiden eel.

Yes, King Romulus had been going about his kingly business when a mist descended and enveloped him. When the mist rose, he was nowhere to be found.
His close aides, who were with him at this time, came to rapid conclusion that he must have been spirited away by the gods. One even claimed that he had spoken to the ghost of Romulus who had told him he was fine and happy hanging out with the gods and that Rome should just get on with being fabulous without him.

Historian Livy raises the far more likely explanation that the close aides had killed the king, disposed of his body and come up with this ludicrously rubbish cover story to hide their actions.


The Roman day was divided into 12 hours that started at sunrise and ended at sunset. Only, even the Romans couldn’t fail to notice that in winter the time between sun up and sun down was shorter than that during the summer. What to do?

Change the length of an hour depending on the season of course! In summer a Roman hour was around 30 minutes longer than an hour in winter.
Keeping on to a theme of measuring time.....

FACT FIVE
In the 263 BCE Rome was gifted its first ever public sundial by Sicily. This was proudly installed in the Forum. It took 95 years before anyone noticed the calibration was off and it had been telling the wrong time for nearly a century.

Which tells you exactly how little Romans were concerned with being places on time.

FACT SIX
To inject more impact into their eloquence, lawyers would hire an audience for their trials. 3 denarii per head would buy you a mob to applaud your finest points and shout 'bravo' at key moments.

Lawyers were not alone in hiring an encouraging mob, the Emperor Nero was at it too. He put together a team of 5,000 youths who accompanied him during his artistic endeavours and made sure he received his rightful adulation.
They had three different types of clap: the bees, the roof tiles and the bricks.
The roof tiles was produced by clapping with hands rounded like roof tiles and the bricks by clapping with flat hands (because bricks unlike roof tiles are flat). And the bees clap? Maybe it sounded like humming, maybe it was produced by a rapid clapping of the hands like the wings of that flying insect, maybe it was a clap with a sting in it’s tale. In short, we have no idea.
FACT SEVEN
It was the fashion to drink perfume.
Perfume was extremely expensive in ancient Rome and so using liberal amounts of it was to demonstrate your extreme wealth. The Emperor Otho was said to have dabbed perfume on the soles of his feet, Caligula had his bathtub smeared with perfume before he would get into it and Nero's famous golden house squirted perfume from the walls onto his guests.
But the most ludicrous use of scent was those people who mixed it in a drink, so that their insides would smell as sweet as their outside.
FACT EIGHT
There were penalties for not being married.
The Emperor Augustus brought in a set of laws designed to improve the moral structure of Rome, as well as increasing the birth rate. He offered a bonus for producing three children,
Alongside the carrot came the stick, you could expect to be fined if you were not married by the age of 20 for women and 25 for men.
FACT NINE
Slaves could be ludicrously expensive.
There are plenty of examples of Romans spending silly money on particular slaves. A man named Calvisius Sabinus spent 100,000 sesterces on a slave that could quote the entirety of Homer from memory. Which is mere horse fodder when compared to the slave that Sejanus, heard of the Imperial guard in the 1st century CE, sold. The eunuch, named Paezon (meaning 'boy toy') was sold by Sejanus for an alleged 50 million sesterces!
This sum is so ludicrous that we have to suspect that the purchaser of Paezon had been menaced into it  by Sejanus. Or alternatively was very keen to buy Sejanus' influence.....
For more fabulous Roman facts check out my new book How to Survive in Ancient Rome
L.J. Trafford is the author of the Four Emperors series of novels which cover the fall of Nero and the tumultuous year that followed when four emperors attempted to rule Rome.
They are available on Amazon and other sites.
Posted by LJ Trafford at 00:00

I really enjoyed this, Linda, and your new book looks great. I shall order a copy and am really looking forward to reading more fabulous facts!

Funnily enough, just this week my Mum was telling me how wonderful cabbage is - perhaps she has secretly been reading Pliny the Elder...

Every first aid kit should have a cabbage in it:)