The phrase 'tour d'horizon' is one I heard on  the 4th February, when I was on my walk, listening to one of my favourite podcasts. It's called The Rest is History and every episode is a conversation between Dominic Sandbrook and Tom Holland, both of them wonderful talkers and excellent historians and writers of accessible and fascinating books.  For this episode, on China, they had Michael Wood as their guest and the hour -long discussion of China's history was described as only touching the surface....glancing across the whole horizon...of an enormous subject. 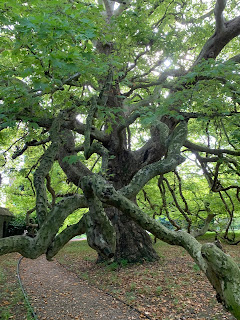 So I decided to call my post by the same name because that's what it is: a glance across the last six months of the Pandemic, which has changed our lives in all kinds of ways and done very strange things to the ordinary unrolling of each day. In many ways, I'm leading exactly the same life I always do: in my house, by myself, getting on with my stuff.  There was a time, as recently as September 16th, which is when the photograph above was taken, when it was possible for me to get on a bus and go and meet my friend Caroline Wilson in the garden of Emmanuel College. She showed me this magnificent tree, the oldest in Cambridge and we sat there on a bench in the sunshine having coffee from a flask and wondering what the autumn would bring. I'd just read a book by Richard Powers called  The Overstory and so trees were on my mind and this one  had a history of many hundreds of years. 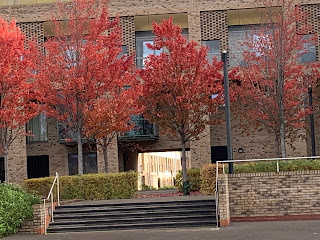 Trees again....all through this time, in hard lockdowns and easier times too,  I've been walking in my own neighbourhood. I always have an eye out for the trees and this shot taken in late October shows them at their best.  I do an hour a day and sometimes I go through a suburb which has grown up from scratch about five minutes from my front door. When we came to Cambridge in 2010, there was nothing but fields between our house and Addenbrooke's Hospital. Now there's a whole suburb there, called Great Kneighton, complete with school, Medical Centre, and lots of imaginatively designed (for the most part) houses and flats. There's Hobson's Park  in the middle  of Great Kneighton and that has a lovely bird reserve. You can look over the bird reserve and see the blue curve of Royal Papworth Hospital in the distance. You'll see a photograph of this towards the end of this post. One of the things I most admire about the design of Great Kneighton is the imaginative planting of many different varieties of trees and shrubs which is still going on. Only yesterday gardeners were busy putting in lots of saplings. 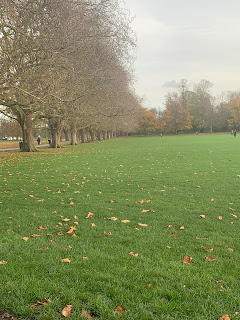 One of the joys of being in Tier 2 in November was still being able to meet a friend in the park for a walk. Judith Lennox and I walked a lot on Jesus Green in Cambridge and ended our walk sitting outside at a pavement cafe back in the day when this was still allowed. The weather was cold but it was such an enjoyable thing to do. 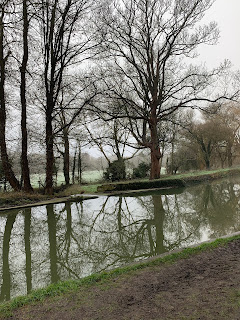 The date on the photo above is New Year's Eve. Helen Craig (of Angelina Ballerina fame) and I went walking in Great Shelford Recreation Ground. I went there once about nine years ago to watch my grandson playing football but here it had been raining.  There's a lot of Great Shelford history attached to Helen. Her daughter-in-law is the writer Sally Christie who still lives in the village.   Sally is the daughter of Philippa Pearce, who is arguably the most famous person to have lived here. Philippa's children's books,  especially Tom's Midnight Garden, are classics and several (like Minnow on the Say) are set along this stretch of river. There's now a memorial arch to Philippa a few yards away from the river, at the entrance to the children's playground. 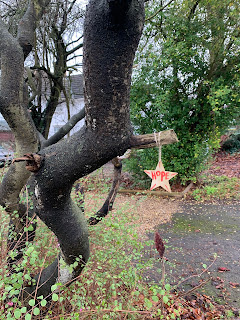 On another walk, on January 6th, I came across the little star labelled HOPE. I regarded this as an omen for my new book, which is being published on March 4th under my pseudonym HOPE ADAMS. It's a novel called Dangerous Women, and my publishers, Michael Joseph in the UK and Berkley in the USA (where it came out ten days ago) have done wonders online to publicise it and ensure that the world  is aware of it. Still, it's odd  not being able to visit bookshops and I'm looking forward to the world of books returning to normal by the time the paperback appears. 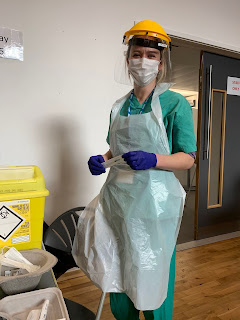 What the little star did turn out to be an omen for was the Vaccine. I had my first jab at my local Medical Centre and was able to walk there and back. This lovely young woman was my vaccinator and the whole process took minutes. All most efficiently and kindly done and it's the vaccines which give me the expectation that one day this pandemic will end and we will be able to see everyone again, just as we did in those long ago days before Corona virus hit us. It goes without saying that I'm full of admiration and praise for everyone in the NHS who has worked hard to deal with everything that's been thrown at them. But I'm also grateful to shop workers, delivery drivers, bus drivers, teachers, home schoolers and everyone else who's worked their socks off to make things bearable. Most of all, though, I'd like to thank every scientist who's worked on ways of vaccinating us, finding drugs to  help us if we get sick and every single person who's had to deal with this strange situation in the best possible way. 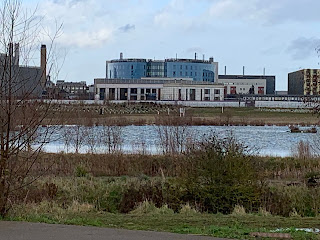 The blue building is Royal Papworth Hospital, part of the Cambridge University Hospitals, which with Addenbrooke's just behind it, employs thousands of people and contributes to the welfare of the area and the nation in so many ways.  I'm not about to write any fiction about the Pandemic, but it will be interesting to see the novels and dramas that emerge in future, reminding us of what went on, all over the world. This is a particular moment in history and I've had a ringside seat for it, in front of my television. We take television for granted but it's been a real life saver. I've also read reams and reams about the situation in newspapers and  I'm grateful to all journalists, film makers and broadcasters. They showed us the world and explained it at a very strange time.

That's a lovely phrase and suits your post perfectly! Beautiful photographs of all the trees, especially the ancient one in Emmanuel College garden.

Wishing you lots of success with your book, which I am already looking forward to reading!