A photo can tell you so much.

When I was writing Hope against Hope, set in Belfast and along the new Irish border in 1921, I spent a lot of time walking round East Belfast and trying to see it as it would have been one hundred years ago when I placed my fictional girls' hostel there.  I also pored over old photos. Some streets and buildings – terraced houses, churches and mission halls and shops – haven’t changed too much, but there are new housing estates where once were factories; new motorway links and huge junctions have replaced back allies and tramlines. 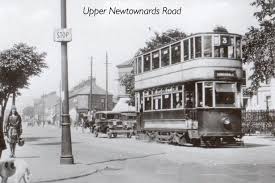 Belfast in 1921 was on fire – often literally. Northern Ireland, which commemorates its centenary this year, was born from compromise and conflict, an expedient solution to an age-old problem. It was not really designed or expected to succeed; many would argue that it has not. But this is not a political post. This is about two little girls who had their photo taken in East Belfast in the early 1920s – it might not have been 1921, but I like to imagine it was because of the novel. 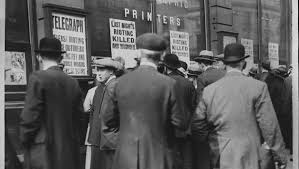 Their names are Frances and Annie Duff. Frances is about thirteen and Annie nine or ten. They are my grandmother and my great aunt. They smile out, both with the expressions I remember so well from their later lives as elderly women. (They both lived into their nineties.)  They are well dressed, with the extravagant hair bows I remember from early school story illustrations. Both wear pearls and Annie has a wristwatch. This is clearly An Occasion. 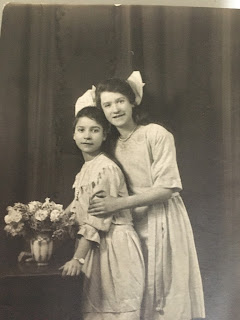 I like to think that it is June 1921 and that they are all dressed up to go and see the King and Queen open the first Northern Irish parliament at City Hall, as thousands of other unionists did. But possibly not. Gran, an inveterate teller of Stories of the Olden Days,  never mentioned such an outing. But then I knew nothing of this visit myself until I did the research for Hope against Hope, so perhaps I just didn’t ask the right questions. When I look closer at their frocks – all their lives they would call dresses frocks -- I see that they are fashionably short, but with huge hems –  made to last. They contrast with the lace edgings of their best frocks in the photo taken some years before – and I think this is not just a change in fashion, but a change in family fortunes. Their mother, Fanny, made their clothes, and took in sewing after their father died – which I believe was in between the two photos. As was the death of their big sister Sadie. 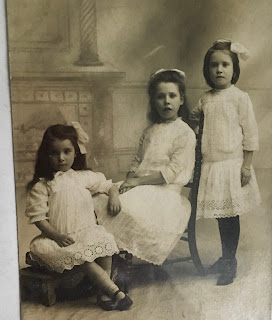 Unlike the first photo, which was definitely taken in a photographic studio, I fancy this one was taken at home in Beechfield Street. I imagine that I remember that very vase, that little table with its barley-twist legs, but both would have been commonplace in 1921, so they may well have been in a studio.  Wherever they are, I do know that outside was a troubled city, disturbed by rioting and burnings. I know their local Catholic church was attacked in 1920, and that same year, thousands of Catholic workers were run out of the shipyard where Frances and Annie’s father and brothers worked. Nothing of that shows in the photo, but then neither does the tragedy even closer to home – except that Frances, now unexpectedly the Big Sister instead of the middle one, leans rather protectively into Annie – perhaps she is thinking of how fragile a sister’s hold on life can be. Or perhaps she is just doing what the photographer asked: all her life she was a gentle and compliant woman, unlike her granddaughter. 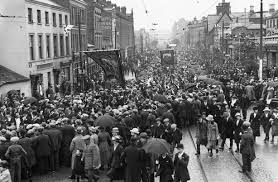 My favourite scene in Hope against Hope is a garden party, where the girls of the hostel at the centre of the story invite neighbouring families for tea, sports and entertainment. Of course I know that’s not where Frances and Annie are going, a treat after the family deaths, a distraction from the troubled city outside their front door. Because I made it up.

But without Gran’s stories, and photos like this, I couldn’t have. 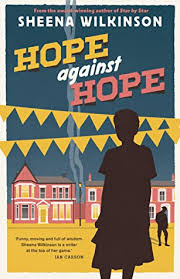 What an interesting account. I think old photographs are so evocative - a great starting point for stories.

What a fascinating post, Sheena. The photographs are absolutely lovely and you tell their stories beautifully.

I wonder what your grandmother and both your great aunts would have thought had they known they would appear on the 'History Girls' blog one day. The name is perfect for them.