The Good Bits of Nero - by L.J. Trafford

The British Museum has been proudly boasting about the opening of its new blockbuster exhibition on the Emperor Nero, tagline The Man Behind The Myth.
Apparently, it “questions the traditional narrative of the ruthless tyrant and eccentric performer revealing a different Nero” And asks whether he was the “merciless, matricidal megalomaniac history has painted him to be?”
This certainly attracted the attention of the tabloids who have gleefully rehashed all those stories about Nero you’ll no doubt have heard of that show him to be a merciless, matricidal megalomaniac.
Which all seems reason enough for me to jump on this particular bandwagon and write my own piece on Nero. Because like The British Museum exhibition sets out to show, Nero wasn't all bad. In fact sometimes he could be described as good. Let us put aside tales of matricide, eunuchs* and sexual depravity and consider the good bits of Nero.
*If you happen to be interested in eunuchs, or indeed sexual depravity, click here for one of my previous history girls posts that features Nero.

He knew how to impress
I’ve never understood the ‘bicycling’ monarchies of Europe. I mean what’s the point of a monarchy if it behaves just like you and I. Surely if you are going to have a royal family it should feel, well royal, with their preferred mode of transportation being huge golden coaches accompanied by many shiny helmeted soldiers riding a top the finest horses available. There should be crowns and jewels and full on grandiose pageantry.

This is something that Nero really gets. He understands that to be Emperor is to put on show that demonstrates just how powerful, mighty and loaded Rome is to the rest of the world. He does this by never wearing the same outfit twice, refusing to travel anywhere with less than 1000 carriages (presumably to hold all the costume changes) and, most gloriously, fishing with a golden net woven with equally ludicrously expensive purple threads.


When the Armenian King, Tiridates was sent to Rome to be crowned as part of a peace settlement between Rome and its rival empire Parthia (both of whom fancied sucking up Armenia into their territory), no expense was spared. The visit cost a staggering 800,000 sesterces per day.
Ancient currency is always difficult to equate meaningfully to modern money, but I shall attempt to put this in context: IT IS A SH*T LOAD OF MONEY.
You could in the 1st century AD buy 800 hectares of land for 800k sesterces, the equivalent of 1,976 football pitches. Alternatively, you could hire the services of 666 soldiers for a year or for the bird fancier among you, purchase 500 carrier pigeons.
But Nero wasn’t done, oh no. Pliny the Elder tells us he filled Pompey’s theatre with gold to impress the king – who he clearly hoped would go running to Parthia with stories of Rome’s inexhaustible resources. And just to hammer home that point with the subtly of, yes a hammer, Nero gave Tiridates a parting gift of a hundred million sesterces. We can only assume that King Tiridates went back to Armenia and instantly brought 62,500 pigeons.
Nero’s extravagance hits its peak with the building of his golden house whose walls squirted perfume onto visitors and which included a rotating ceiling (note a similar swirling effect can be achieved by over indulging in wine and laying down).
With such colossal amounts of money available, Nero does what all of us would do once we’d sorted out our basic needs of accommodation, pigeons, golden nets and unlimited changes of clothes, he has a 98-feet high gold statue built of himself in the nude and commissions a 120-foot painting depicting his likeness.

This was the grandeur of Rome and its ruler on full display. Few visitors would leave the city without an appreciation of the might and wealth of the Empire. Not to mention a vision of what Nero looked like sans loincloth.

He was a man of passions

Nero’s famous much quoted final words were “what an artist dies in me!”
Nero’s pretension at art is something that sets our sources in full sneer. But I would argue that it’s nice that he has interests and hobbies. Everyone needs a passion in life and Nero has passions a plenty; he sings, he writes poetry, he plays the lyre and water organ, he acts and he races chariots. All things to round the character.

But these interests of Nero's are no whims mind, no passing fancies. The Emperor puts real efforts into his passions, as Suetonius tells us:
“For he used to lie upon his back and hold a leaden plate on his chest, purge himself by the syringe and by vomiting, and deny himself fruits and all foods injurious to the voice.”

Whilst in Greece he races a 10 horse chariot, yes he crashes but that he dares to attempt something so ludicrously dangerous (chariot racing even with the standard four horses has a high level of crash potential) surely shows a certain fearlessness and willingness to try new things.

But these aren’t just private passions Nero shares them with Rome. He inaugurates new games and festivals, including the Neronia which consisted of  events usually only seen in Greece, such as music, gymnastics, and riding.
Although I personally fancy the show that included a naval battle in sea monster inhabited waters alongside pyrrhic dances by Greek youths
Ships fighting! Monsters in the sea! Gyrating teenagers on a gap year! What’s not to love?


However, not only did the audience get a fabulous spectacle to enjoy, there were also prizes to be had:
“Every day all kinds of presents were thrown to the people; these included a thousand birds of every kind each day, various kinds of food, tickets for grain, clothing, gold, silver, precious stones, pearls, paintings, slaves, beasts of burden, and even trained wild animals; finally, ships, blocks of houses, and farms.”
And to think all we get is the Royal Variety Show.

He had the popular touch.

Given Nero’s reputation today we might be forgiven for believing that his demise by his own hand aged only 32, was roundly greeted by all.
Not so at all, Suetonius tells us :”There were some who for a long time decorated his tomb with spring and summer flowers, and now produced his statues on the rostra in the fringed toga, and now his edicts, as if he were still alive and would shortly return and deal destruction to his enemies”
Tacitus talks about the dregs of the common people being distraught by Nero's death. Tacitus is quite the snob, so these dregs might likely constitute a majority.

That he was a figure held in affection by Romans is shown by the lengths one of his near successors, Otho (who ruled briefly the year after Nero's suicide) took to associate himself with the late Emperor. He restored statues of one of Nero's wives, pledged to finish the construction of the golden house and began signing despatches as Nero Otho. That Otho saw this as a winning tactic is telling, there had to be a bubbling of public affection and love for the late emperor for him to capitalise on.
And this affection held sway because in the following two decades after Nero's death in 68 CE three men pop up claiming to be him. That each of those imposters is so enthusiastically embraced, at least for a short time, by their supporters shows how deep the hope went that their fallen Emperor might not have perished. In our times only Elvis Presley has attracted a similar style of afterlife.
But why? Why does Nero, of all the Emperors of Rome, manage to endear himself so firmly in the hearts of his people?
For all the reasons listed above; he was generous, he knew how to put on a show, he had passions which he shared, he built amazing statues and palaces. And then there's those sea monsters....
In short he knew what the people wanted in their Emperor.
L.J. Trafford is the author of Palatine, the story of the final days of Nero (good bits and bad). As well a guidebook to Rome in the year 95 CE, How to Survive in Ancient Rome. 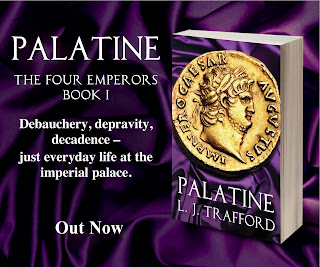 What a brilliant way to whet our appetites for the British Museum exhibition! Thank you, Linda. This has given me much food for thought on Nero - he certainly liked his bling, didn't he?

I can't help but be reminded of the famous inscription on the temple of Apollo at Delphi: 'Nothing in Excess'. The irony!

Dazzled by all the gold and the life-style and the self-belief.
What great material for your PALATINE novel.