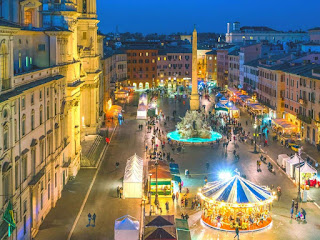 This is a photo of a Christmas market in Piazza Navona, Rome’s beautiful baroque square. Like most of you, I haven’t been able to go abroad for over two years and I’m feeling pangs of nostalgia for Italian Christmases I have known.

In the Piazza Navona children queue to meet La Befana, a friendly witch who rides around on a broom delivering sweets to children on her good list, and coal to naughty children. Her name derives from the word "epifania", for it is on January 5, Epiphany Eve, that she flies around. Parents leave her a glass of wine and some food and before she flies off from each house she   sweeps away the problems of the last year. This is an older tradition than Babbo Natale, or Father Christmas. 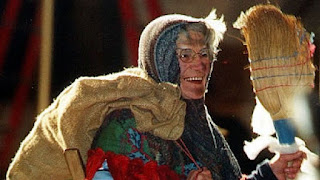 According to the Christian (and of course sexist) version of her story, when the three Magi followed the star, bearing their gifts of gold, incense and myrrh for the new-born Jesus Christ, many people joined them. But one old woman said she was too busy with her housework. Later, she changed her mind and ran after them with a bag   of presents for the baby but she was too late and so she is still searching for him. There are many versions of this story.

This might in fact be a Pagan tradition, going back to an ancient Roman festivity in honour of Janus and Strenia  when Romans used to give each other presents at the beginning of the year. In Italian a Christmas gift used to be called strenna. 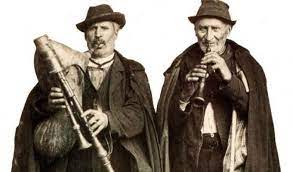 Another Christmas tradition you still see in Rome is zampognari   -   men playing wheezy bagpipes, dressed as shepherds in short trousers with leather leggings, a sheepskin vest, woolly cloak and peaked cap. Most people think they are there in imitation of the shepherds who worshipped the baby Christ but this, too, might be an earlier tradition:  bagpipes are a very ancient instrument and it’s possible that even in Roman times shepherds started coming down from the Abruzzi, the mountainous area just outside Rome, in winter, to earn some extra money playing music.

Tonight, Christmas Eve, is the Vigilia di Natale and like all Italian holidays it’s an excuse for wonderful food. You are not supposed to eat meat on the eve of a feast day. Here is a seductive picture of some of the delicious fish dishes that might be served, including baccalà (salt cod), frutti di mare (shellfish), capitone (eel), calamari (squid), scungilli (conch meat) andvongole (clams). Fried artichokes, pickled vegetables, and fried fiori di zucchini, (courgette flowers), are often served. 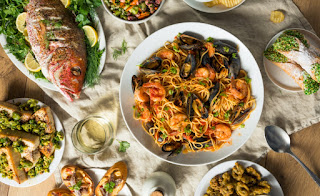 Most Italian families  set up a ceppo or presepio. This comes from the Latin word for a crib. It’s a small pyramid-shaped wooden frame displaying a model of the Nativity scene.  In Naples, on the Via San Gregorio Armeno, you can buy hand carved figurines  for this charming tradition of folk art. This is a traditional presepio: 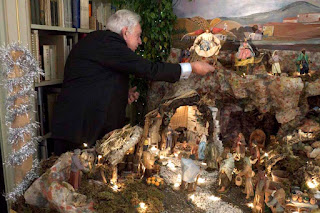 This idea of bringing the nativity scene to life is supposed to have been invented by St Francis of Assisi. In 1223  he recreated the scene of Jesus' birth in the town of Greccio, using real people and animals,

He wrote, “I want to do something that will recall the memory of that Child who was born in Bethlehem, to see with bodily eyes the inconveniences of his infancy, how he lay in the manger, and how the ox and ass stood by."

Later, Churches and homes across Europe began to stage their own versions with model figures instead of live participants. In 18th-century Naples famous sculptors and painters were commissioned by aristocratic patrons to create figures and backdrops for magnificent presepie. These tableaux incorporated fascinating scenes of everyday life in Naples – street-sellers, beggars and shopkeepers joined the shepherds, the three Magi and the holy family against an elaborate backdrop of taverns and ruined temples. The V&A have a wonderful   collection of these  presepio figures dating back to the 18th century.

You also see less traditional versions, such as this one, from Naples, with celebrities including Superman, mafiosi and politicians including (I think) Belusconi. As well as the usual scene of the Nativity you can see a tavern with sausages and hams hanging up and a market laden with fruit and vegetables. 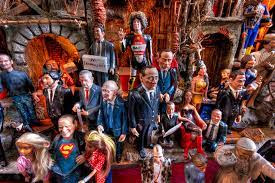 For those who are not devout Catholics, all this can feel like too much religion. Goethe certainly thought so, he described Christmas Day celebrations in St Peter’s Square on January 6 1787 in his Italian Journey: “The spectacle is unique in every way, splendid and quite dignified.” But, he added, “I am such a long-time Protestant Diogenist that I find the magnificence more repellent than attractive. Like my pious predecessor I would wish to say to these ecclesiastical world conquerors: ‘Do not hide the sun of higher art and pure humanity from me.’”

For me, as an agnostic  Italophile foreigner, these traditions are  very attractive and I look forward to being able to enjoy an Italian Christmas again some day.

Happy Christmas to everyone!