RUSHING ABOUT: The matter of Medieval flooring by Elizabeth Chadwick. 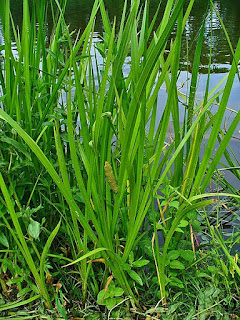 Some time ago on a history forum, there was a discussion on medieval floor coverings.  Rushes (reeds) being strewn on the floor is a frequent mention in descriptions of works of historical fiction.  One poster opined that this was unlikely and that if reeds were strewn on the floor at all, they would have been in the form of matting. The issue is taken up by author Sarah Woodbury who is in the camp of the rushes actually being matting because it would be difficult for medieval ladies in trailing gowns to walk on such a covering.  You can see the argument for yourself here: https://www.sarahwoodbury.com/rushes-on-the-floor/
However, my view is that one size doesn't fit all, and that while the floors of the super rich were tiled as the Middle Ages progressed, and that rush matting was indeed used,  the general strewing of rushes upon every day floor was common practice and of long tradition, with plenty of evidence. The Anglo Norman word 'Junchiere - 1170 - is a word meaning 'strewn with rushes' (Anglo Norman Dictionary)   A century earlier in the reign of William the Conqueror, one of his followers was granted land in Aylesbury for among other things arranging for straw for his bed and chamber floor in winter, and grass or rushes for the same in summer.
King John slept at the house of Robert de Leveland in Westminster in 1207 and the Barons of the Exchequer were ordered to provide straw for the chamber.  In the reign of Edward II, a payment was made for the journey of John de Carleford from York to Newcastle for a supple of rushes to strew in the King's chamber.  There were people employed to do the job of keeping chambers supplied with fresh floor rushes and the job title was 'rush strewer.'  In the reign of Edward IV, the groom of the chamber was to bring daily rushes and litter to stuff the palettes in the royal chamber. In 1419, it was ordered that all the boats bearing rushes for floor strewing, coming into London were to make up their bundles for sale on the boats themselves and not on the wharfside.
In the reign of Henry VIII, rushes were to be brought and strewn in the chamber between the hours of 6 and 7 in the morning.  In 1587, Thomas Newton in his 'Herball to the Bible' was to say that "Sedge and rushes, with the which many in the country do use in Sommer time to strew their parlors and churches, as well for cooleness, as for pleasant smell.'
There is a 1542 reference to the Queen's chamber at Greenwich being 'well-strewed' with rushes.  In 1598, there is a reference to Queen Elizabeth I, passing through a chamber 'strewed with hay' on her way to the chapel.  Henry III of France was told by an envoy that the English had a particular custom of strewing their best rooms with rushes. Indeed, it was a sign of respect for a guest if one did spread fresh green rushes and there was a saying that people would strew fresh rushes for a stranger when they would not give one to a friend!
n 1550, there is a report of a murder at Faversham, The perpetrators murdered the victim and then tidied up the rushes to make it look as if nothing had happened.  They dumped the body in a field, but when the body was examined, pieces of floor rush were found in his shoes, proving that he had been murdered in his own home.
Even Shakespeare gets in on the act.  In The Taming of the Shrew there is a line 'Is the supper ready, the house trimm'd/rushes strew'd, cobwebs swept.'
There are plenty of illustrations of tiled floors and of rush matting in later period and Tudor illustrations, but it seems clear from the plentiful evidence above, that, as with all aspects of history, it doesn't have to be a single track. If rush matting was so popular, it would have left a name in the records. 'Strewing' means scattering after all and the word appears time and again in connection with rushes, which suggests that they were not woven, but judiciously scattered on the floor, and when the room-dweller was high-status, they were frequently changed.  My source book for these snippets (acknowledged below) goes on to say that rush strewing was still being carried out in some parts within living memory of the book's publication.

Main Source - Rush-bearing by Alfred Burton 1891 - a fascinating read that goes into much depth on the matter of rush-strewing, carrying rushes to church, rush carts and Morris dancers.

A couple of years ago, I visited a grand old house (the name of which escapes my senior brain for the moment.) It was moated and walled, with parts dating from at least the 15th century. In the older parts of the house the doors were blocked, at the bottom, by a board slightly less than knee-high. You had to step over it. A notice explained that these boards were 'threshholds.'

It went on to say that the floors would have been strewn with a mixture of straw and herbs, which was called 'the thresh.' The threshhold boards were there to keep the thresh in place, to prevent it being blown out of the room by draughts or kicked out by passing feet.

This stuck in my head when much more useful things have been forgotten because I've always found the word 'threshhold' odd. The idea that it was an actual board, placed to hold back thresh, made a lot more sense.