A Mogul Palace in the Cotswolds by Judith Allnatt 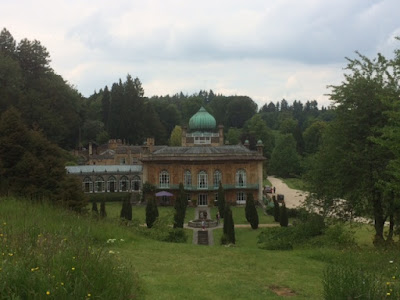 Sezincote is an unexpected exotic gem - a mogul palace and garden in the heart of the English countryside. It is unique in Western Europe and quite different from other houses of the period which draw largely on the Greek classical style. I recently visited this beautiful and remarkable place and was so taken with it and the mystery of how such a place came to be created that I decided to find out more about it.  The name, taken from the local village, originates from  'Cheisnecote', 'Chene' being French for 'oak'  so literally 'oak dwelling'. There are indeed  many oaks in the parkland around the house, creating a contrast between a traditional English landscape and the Indian mansion with its onion dome and minarets, and its unusual semi-circular orangery with peacock -tail windows. 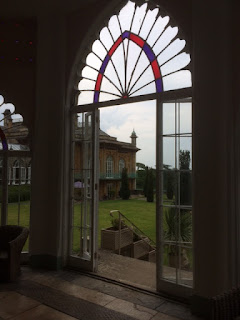 In 1794, Charles Cockerell returned from India where he had lived for several years, involved in the East India Company, in banking and in assisting the civil service's military force in Bengal. Back in England, he became an MP.  He purchased Sezincote, which at the time was a traditional English manor, and together with his brother Samuel Pepys Cockerell, an architect named after their ancestor Samuel Pepys the diarist, began to plan a transformation.

One theory offered is that the building was to be  unusual and splendid to attract attention and garner status. 'Nabobs' - conspicuously wealthy men who had amassed their wealth through the East India Company often returned to England wishing to wield influence and gain titles. There was a common fear at the time that they would use their power to corrupt Parliament. The suggestion has been made that this climate of disapproval might be the reason why, after building an ostentatiously Indian palace, plans for the interior of the house were reverted to a traditional classical style.

However, looking at the timing of the construction this seems unlikely. Public disapproval of the poor administration of the East India company and its activities pre-dates the building of the house significantly. A satirical play called 'The Nabob' was performed as early as 1772 and the British Government in effect took control of the company after Pitt's India Act of 1784, introducing policies to reduce opportunities for corruption. As the house was not started until 1794, it seems that the Cockerell family would not have garnered favour by their choice and that they built it in the face of this difficult climate. 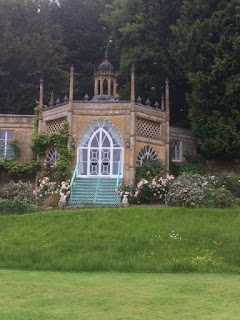 A more likely explanation for their unusual choice is perhaps nostalgia for India. One wing of the house is known as 'the Tent room' because its interior was completely hung with fabric. It housed a four-poster bed and Charles Cockerell is said to have spent a lot of time there. One can imagine him waking to the stunning view over the parkland of the Estate.

It's also interesting to note that although the architecture of the interior of the mansion is traditional, there are many Indian touches such as Lotus flowers painted on the ceiling above the stairs and chairs inlaid with intricate decoration in mother-of-pearl and, originally, rubies. The sheer scope and beauty of the project at Sezincote suggests that the motivation was a visionary imagination at work. 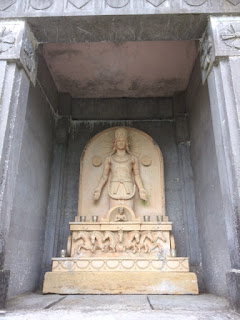 Charles Cockerell met the artist Thomas Daniell in Calcutta. He had travelled in India making paintings of Indian architecture and gardens which assisted Samuel Pepys Cockerell in modelling  Sezincote on this style. The garden, designed with the help of Humphrey Repton,  drew also on spiritual influences. In India springs are sacred and the Sezincote garden design marks the water source with a  pool from which the stream flows through the garden, as a symbol of spiritual energy. Above the pool is a temple to Surya, the Hindu Sun god, positioned so that the sun sets behind it.

At the summer solstice, the rays of the setting sun fall on a stone bench beneath the Indian bridge across the river, which is set between columns and stepping stones over the water giving the effect of a cool, shady pavilion. The bench is marked on the plans as 'the Philosopher's Seat' - an ideal spot for meditative contemplation. 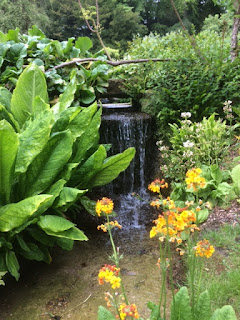 The Indian bridge has statues of holy Brahmin bulls. Daniell designed it with one bull facing the visitor as they approached Sezincote  but Charles Cockerell adapted the design to have two bulls facing each other in order to frame the view from the bridge. 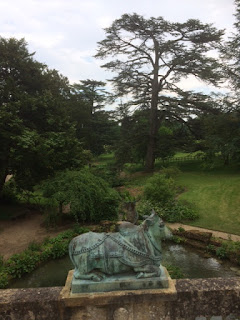 In 1807 Sezincote was visited by the Prince Regent, the mansion supplying inspiration for the Brighton Pavilion. It remains a place of architectural significance and later owners have added features in keeping with the Cockerell's vision and the spirit of the place. In 1943 Lord and Lady Kleinwort bought the estate , which was in poor repair after two world wars. The copper onion dome, which was  originally painted to appear like white marble had had the paint removed in World War Two to make it less obvious to aircraft and was  now verdigris. The roof was leaking and the gardens overgrown. As part of the renovation they  created a  formal garden inspired by the Taj Mahal with rectangular lily ponds and  Cyprus trees.  They built an  octagonal fountain representing eternity, superimposed on a stone square representing humanity, a fitting addition to maintain the unique aura of this fascinating and tranquil place.