In the late summer of 2021, I gained a new moniker: I became, without recourse to surgery, hormone treatment or religious vows, Brother Laurie of the London Charterhouse. Those who are aware of the Charterhouse’s fabulous location ask me how I wangled such an enviable crib. Those who know of it only as an almshouse wonder how I ever came to such a pass.

In brief, widowed, off-loaded by my publisher and impoverished by years of nursing home fees, I was in the fast lane to destitution. The silver lining to this sad story is that I was judged to be a potentially suitable addition to the community of forty Charterhouse Brothers and so began a six-month probationary residence. I am now, yippee, a fully-fledged Brother.

The Charterhouse has been an almshouse since the early 17th century, but its style has evolved. The Brothers used to sleep in dormitories. Now, though we still eat communally, we have small, private apartments. Until six years ago it was a strictly male establishment, a walled and gated place of mystery in Clerkenwell. Then, under the leadership of Ann Kenrick, its first female Master, women were considered for admission  -  there are currently six Lady Brothers  -  and, better yet, the Charterhouse began opening its doors to the public. This has brought me the unexpected bonus of a new occupation. I have become a tour guide.

We live here thanks to beneficence of our founder, Thomas Sutton, and to the good management of his legacy. In return we are expected to contribute to the prosperity and happiness of our community, and as I’m unskilled at organ-playing, magazine layout or small talk, and unlicensed to steer wheelchairs, conducting guided tours seemed like my best bet. We offer two kinds of tour: those led by professional guides who really know their facts and figures, and those led by Brothers who, inevitably, add a personal, insider perspective to the mix.

Faced with 650 years’ worth of history and a regrettable inability to remember dates, I decided to put on my writer’s hat in order to design my tour. It tells, in chronological order, the story of the Charterhouse’s four incarnations. From 14th century plague cemetery and Carthusian monastery, through neglected, post-Dissolution lumber room, then Tudor mansion, then almshouse and school, culminating in today’s architectural mash-up, tourist attraction and, paradoxically, central London oasis. The school has moved up in the world and out into Surrey. The almshouse remains. 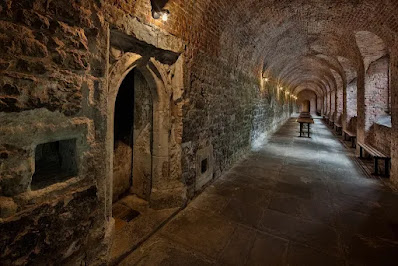 In terms of the Charterhouse’s history, I find there are three sites in particular that enchant visitors. First, the atmospheric Norfolk Cloister. It is almost all that survives of the monastery and is named after Thomas Howard, 4th Duke of Norfolk, who did some home improvements on it during one of his periods of house arrest. He lived in dangerous times. 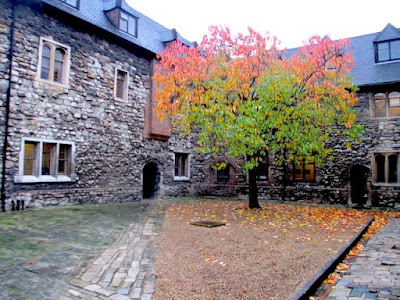 Higgledy-piggledy Wash House Court is the stuff of a film location scout’s dreams, part medieval stone, part red Tudor brick and accessed through tunnel-like slypes. It was formerly the engine room of the monastery, the location of its laundry and bakehouse and living quarters of the lay brothers. Appropriately enough it still houses our launderette and the back entrance to our kitchens.

And then there is the jewel in our crown, the Great Chamber. 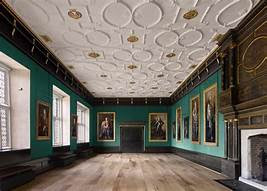 During the stewardship of Sir Edward North, the Great Chamber was the place where the newly proclaimed Elizabeth I broke her journey from Hatfield House to London and held a Privy Council. She stayed five nights. We don’t know where she and her 1,000-strong entourage actually slept but we may imagine Sir Edward’s financial pain.

Elizabeth was to return to the property on several occasions during its occupancy by her doomed cousin, Thomas Howard, and Thomas’s heir had the similarly dubious honour of hosting a Privy Council held by James VI of Scotland on his way to be crowned James I of England.  The Great Chamber (now available to hire for weddings, bar mitzvahs and corporate jollies) has seen a lot of history.

Of course, a Brother’s Tour encourages a more mundane type of curiosity. What is life like in the Charterhouse today? Do we have to wear uniform gowns, as in olden days? No, we dress as we please. Are we allowed out? You bet. Are we summoned by bells? Sometimes, but responding is optional, as long as it’s not the fire alarm.  And do they feed us gruel? Absolutely not. When you come to visit, I’ll be happy to show you our very superior menu for the week.

The Charterhouse, equidistant between Farringdon and Barbican stations, is open to the public Tuesday-Saturday. We have a small, well-curated museum and a gift shop and our tours, open gardens and other events can be booked through the website, https://thecharterhouse.org

We are very grateful to ex-History Girl Laurie Graham for this post. The HG who should have posted yesterday has left the group without telling anyone.

Thank you, Laurie! I've been lucky enough to have Brother Laurie's tour in person and I recommend it most highly! The Charterhouse is an enchanting place.

This is so fascinating, Laurie. Congratulations on your new status. I would love one day when I am in London to come on your guided tour.

What a wonderful post, Laurie, and I was so glad to read of the silver lining to your story. How brilliant that the Charterhouse now admits women - you and your fellow Lady Brothers will bring so much to the community.

I also have a personal connection to this story as I was fortunate enough to live in Charterhouse for two years - not as a Lady Brother but as a private tenant. I was working all hours as a lawyer and had decided to move back to central London to avoid the commute. Returning to the haven and tranquillity of Charterhouse at the end of a stressful day was such a privilege. It was also a privilege to get to know some of the Brothers at that time and to become involved in the wider Charterhouse community. I remember the roses in Pensioners Court, even in December, and I used to love strolling through Wash House Court.

Your account is fascinating and your tours sound wonderful. I shall hopefully have the chance to join you for one someday and to hear your stories in person. I wish you every happiness in your residence at Charterhouse - and thank you for bringing back such treasured memories.

This sounds wonderful! I don't often come up to London, but next time I do, I'd be very tempted by a visit and a tour. And I'm very glad you found this refuge.