Wonders and Warnings - by Ruth Downie 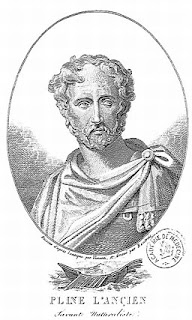 Maybe Pliny the Elder was born 1900 years too early. As a man who was interested in everything and who needed very little sleep, he would have loved the possibilities of the Internet. As it was, he gathered together everything he’d learned in an early handwritten version of Wikipedia that stretched to 37 volumes, and if you want a splendid and entertaining overview of it, click back to LJ Trafford’s 2019 post on "The Curious Roman".

Pliny’s daylight hours were filled with a series of highly responsible jobs, so his writing was done largely at night. His reading relied on what we now call audiobooks, achieved by having his staff follow him around and read to him in every spare moment. With limited opportunities for fact-checking, he adopted an early version of the retweet – not claiming that what he wrote was accurate, merely reporting that someone else had said it.

I’ve restricted myself to a few highlights from his writings about the Human Animal, some of which may come as a surprise but all of which were thought to be accurate by somebody… unlike the picture of him above, which as far as I can make out is based on no evidence whatsoever.

Should you travel where the north wind rises, you may run into the Arimaspi, people with one single eye in the middle of the forehead. You may also encounter the local griffins. Try not to be there when they meet each other. The Arimapsi have a bad habit of stealing the gold that the griffins have painstakingly mined out of their burrows, and there will probably be a fight.

There are wild men in the woods of Abarimon whose feet are fitted on back to front, but you may never see them because they can run very fast. Also, they’re unable to breathe in a foreign climate, so they don’t travel well.

Everything is bigger in India, and at this point I should probably mention the dog-headed men. They do little of interest beyond barking and hunting using only their nails, but as Pliny’s source says there are 150,000 of them, you are more likely to spot one than either a griffin or a man with his feet on backwards. 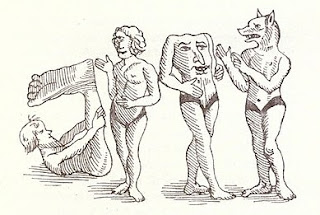 India is also the home of the men who have only one leg and jump everywhere. When the sun is fierce, the jumping stops and they lie down to shade themselves under their one foot.

Sadly Pliny does not dwell on the details of the men who are enveloped by their ears, nor the men without necks whose eyes are in their shoulders.

A little more time is devoted to the Astomi, a hairy people who clothe themselves in cotton-wool, have no mouths and get all their nourishment from smell. This is a mixed blessing, as a stronger-than-usual stench can easily be fatal.

Further away lies the mountainous home of the pygmies, which would be delightful were it not blighted by plagues of cranes. In spring the pygmies saddle up their goats, gather their bows and arrows and set out on a three-month cull of the crane breeding-grounds. 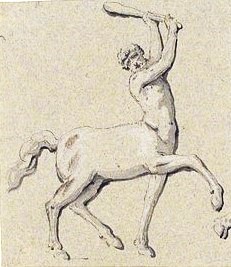 If you feel your credulity being stretched by any of this, bear in mind that Pliny actually saw a Hippocentaur - the exciting result of breeding a horse with a human. It was preserved in honey and had been brought from Egypt to show to the Emperor Claudius.

Which brings me to reproduction – and here I want to change Pliny’s order slightly. It is no good starting with his warning that it is potentially fatal to yawn during childbirth. We need to lay down a few fundamentals first.

Since men can turn into women and vice-versa, it may be useful to know that a woman has fewer teeth than a man. Also, women are never left-handed.

If you are indeed a woman, you should be aware of the dangers of the menstrual flow. Should you venture abroad at the relevant time of the month, disaster will follow you. New wine will turn sour, crops will fail, seedlings will shrivel, fruit will fall prematurely from the tree, knives will go blunt, bees will die, metal will rust and even the local ants, should they catch a whiff of you, will drop the food they were carrying and run away.

On a brighter note – should you wish for a beautiful child, take care to keep your gaze on something beautiful at the moment of conception. Remember that children can inherit birthmarks, moles, scars and – in the case of Dacian children – tattoos.

I’ve already mentioned the yawning. Also, try not to propel the infant out feet first. This is how both Caligula and Nero were born, which does not bode well.

You may have noticed that the human race as a whole is getting smaller. This is because the earth is getting warmer and the heat dries up the fathers’ semen.

Despite all this, be encouraged. Your child has the potential for a bright future. Not only has Rome produced more outstanding individuals in every field than all the other nations put together, but Romans are the most virtuous people in the world.

The length of a human life is an uncertain business, but claims of humans living 500 or even 1000 years are only made by people who don’t understand that a year lasts for a whole twelve months. There are plenty more reliable records from Italy, including one region where fifty-four men were recorded as over 100 and three of them were over 140.

Pliny was adamant that “nature’s supreme gift” of death was the end of every human existence, and there would be no afterlife beyond it. He received that gift himself at the age of only 55, while on a research and rescue mission during the eruption of Mount Vesuvius. His nephew, who witnessed the disaster from across the bay, described the cloud above the volcano as in the shape of a pine tree.

Here, in honour of the splendidly enthusiastic and energetic Pliny the Elder, is the pine tree that now looms over the Getty Roman Villa. 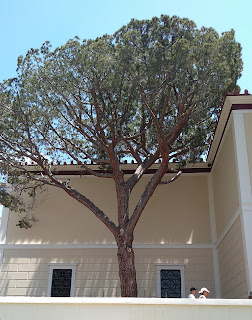 Ruth Downie writes the MEDICUS series, featuring Roman Army medic Gaius Petreius Ruso - a man whose desire for a quiet life is thwarted both by unwanted murder investigations and by his British partner, Tilla.