This beautiful paperweight was a present to me from Linda Newbery on my 70th birthday, five years ago. It's always on my desk and is one of my Top Treasures. 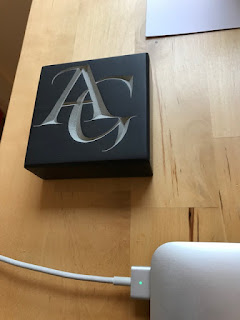 It was made by a master craftsman called Bernard Johnson out of slate.  I've always been very fond of this material. We take it for granted most of the time. Many people use slate chips in their gardens, and I bought a set of slate coasters from a gallery shop in a museum that I can no longer locate in my memory. It's beautiful stuff and the best slate in the world comes from Wales. 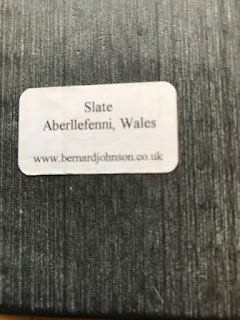 Last month, I wrote about the copper of Parys Mountain on Anglesey. And on the same visit, to my friends Bob Borsley and Ewa Jaworska, they took me also to Snowdonia. We went to visit the National Slate Museum at Llanberis which was just up the road from this idyllic scene. 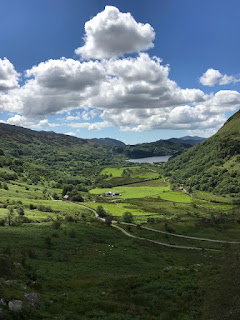 The museum is located in the now disused workshops of the Dinorwic Slate Quarry and it's beautifully organised and laid out. We started out by looking a very informative video, which explained how four slate workers' cottages had been moved lock, stock and barrel to this site, and set up to show how the men who worked in the quarry lived at different historical periods. We were also told that nowadays, no slate is quarried here because China produces it much more cheaply.

We then went into a large, pleasant space, where a delightfully chatty man was about to demonstrate the art of cutting slate. He had an enormous rectangle resting against one knee and with a thin chisel he chipped away at it, knocking it gently all the way round and after a few knocks, a layer of the whole thing seemed almost to fall of the bigger block as single sheet, which looked impossibly thin. Below is a photo of the various sizes of the slate and I took this photo because I loved the names given to the different proportions: Princesses (24" by 14") Duchesses (24" by 12") Countesses (20" x 12") Wide Ladies (16" by 12") Broad Ladies (16" by 10") Narrow Ladies (16" by 8") 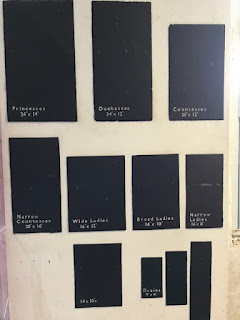 Below is a photo taken in one of the cottages. This is the parlour and the only downstairs room apart from the tiny kitchen on the ground floor. It dates from the beginning of the 20th century. There's one cottage that is from 1969 and in that one we saw a bath and an inside toilet  and I recognised many of the fixtures and fittings from the days of my youth. 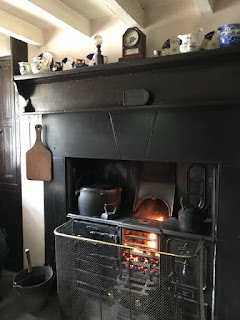 After visiting the Slate Museum, we went to the Llechwedd Slate Caverns, near Blaenau Ffestiniog.  You can do all kinds of things there, like zip across disused workings on a wire. Which was clearly not the kind of thing I was up for! But we did go on the Explorer Tour, which involved strapping yourself into a Army truck and driving to the highest point of the old workings. And  then down again. Malcolm was our intrepid driver. At one point, we had to reverse down a slope with a dizzying gradient and I just shut my eyes. There were other times on the drive when I decided I didn't want to look but mostly, it was amazing and very exciting.  The photos below show what the terrain looked like... 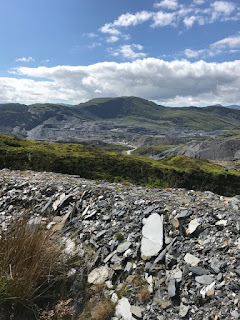 ...and also what used to be there before work stopped in the quarry. 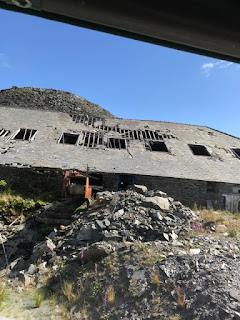 After I got home, I started not taking my slate for granted. I looked more carefully at my garden slate chips. I admired anew the coasters I use every day and thanked Linda and took my hat off to Bernard Johnson all over again. And the very next day, in the Times, I saw the photo below. It shows the roof of the Serpentine Gallery in London, made from slate by artist Junya Ishigami. What cam I say? Slate rocks! 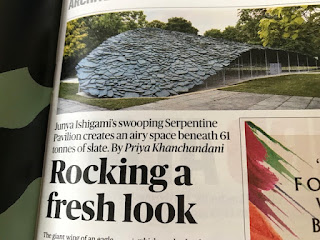 I love slate. Over here in France, I have heard it referred to as one of the "noble" materials, which I think is rather fine. Thank you for this, Adele. It's years since I have been to Wales and you transported me there for a brief moment.

Thanks Adele - and what a thoughtful, beautiful gift.

We went there some years ago and it was certainly a most interesting museum and presentation of the quarry men's skills. The grand names they used for the slate sizes are enchanting!