Casanova and me, and Me Too - Michelle Lovric 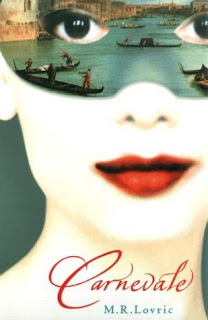 My first novel, Carnevale, published eighteen years ago. I was anxious then – because I was daring to be the first female writer to describe how it might have felt to be loved by a man like Casanova. Today I would be much more afraid. For Casanova has fallen foul of the Me Too movement, something I learned at a fascinating symposium held in Venice last month.

Delegates explained how last year’s touring exhibition about Casanova met with fierce criticism in the United States. Some galleries even stoked the fire to court publicity. Today’s sensibility has judged him harshly on his interest in very young girls, the avidness of his seductions and two cases of violence against women (for which he also condemned himself).

I cannot defend him on any of those points, but those who now vilify him would find some surprising material if they went so far as to read any of his 3000 pages of memoirs. Casanova was no Don Giovanni. He deplored cold-hearted notchers of bedposts. He thought women had more pleasure from sex than men, ‘because the feast takes place in their own house’ and because they risked the pain and danger of childbirth with each sexual act. As Malina Stefanovska observed during the symposium, Casanova may have been projecting somewhat when he declared that the visible pleasure of his lovers made up four-fifths of his own. However, he took responsibility for contraception. He would stay celibate rather than transmit a sexual disease. He would not sleep with England’s premier courtesan Kitty Fisher because his English would not have allowed for the all-important post-coital chatting. For these reasons, and because he once declared that he would like to be reincarnated as a woman, I suspect that he might have been rather on the side of the Me Too movement.

'Casanova in Place', beautifully choreographed by Kathleen González, was a multidisciplinary event, uniting an international cohort of academics, biographers and novelists in a spirit of amity, curiosity and sometimes hilarity. In this, it would have delighted the man who inspired it.

I was honoured to sit on a panel of writers discussing how to render in fiction or biography a man who had written 3000 pages about himself. The day before, novelist and academic Gregory Dowling had delivered a lecture about Casanova in fiction, in which I found my work discussed in rather starry company. Then it was time for the writers to speak for ourselves. 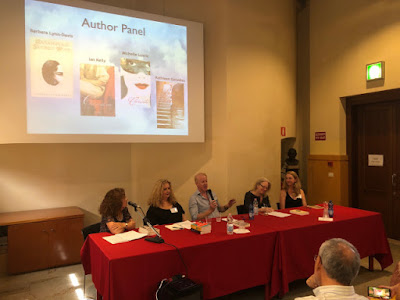 You can see us here above, left to right. Malina, our facilitator, had previously treated the symposium to a reading from one of her own letters to Casanova, in this case on the subject of exile. (This hybrid form, part personal essay, part academic study, proved a moving and apt way to encounter Casanova. I was so inspired by Malina’s rendering that I wrote a poem in response.) Next right there’s myself, author of Carnevale and The Wishing Bones. Then Ian Kelly, who wrote and researched Casanova, a biography, which has been turned into a ballet by Kenneth Tindall , which was also screened for the symposium. Barbara Lynn-Davis wrote Casanova’s Secret Wife, an intense and lyrical first-person account of one of his most famous love affairs through the eyes of his teenage lover Caterina Capretta. Kathleen González is the author of Seductive Venice: In Casanova’s Footsteps (published in Italy by Supernova Edizioni as Casanova’s Venice: A Walking Guide).

Kathleen herself has written here a precis of our discussions about how, as a writer, one handles the hot property that is Casanova’s life.

I was the unicorn in the room, not because I wrote about Casanova in a novel, but because I’d put him into a novel for children aged nine to twelve. So I had the opportunity to explain why, against all expectation, I felt that Casanova was not just an acceptable but even an excellent protagonist for a children’s book.

The Casanova of The Wishing Bones is thirteen rising fourteen, and on cusp of adulthood. All transitions are potentially perilous. You need lots of peril in a children’s book. The symposium seemed rather bemused when I explained that the rule in all children’s books is that you must immediately get rid of the parents - otherwise, someone is looking out for the children and they cannot have proper adventures. Well, Zanetta and Gaetano, Casanova’s parents, delivered that for me without being asked. Gaetano died when Casanova was eight. Zanetta took little notice of her son, regularly abandoning him to travel the courts of Europe as an actress/courtesan/whatever, and even despatching him to the mainland as a very young child to board in terrible conditions on the pretext that the air in Venice was bad for his frequent nosebleeds.

I then explained that the child-protagonist must have an urgent agenda of their own - an inconsolable need or want. As Malina eloquently pointed out the day before, Casanova needed to make the world pay for his abandonment. His issues triggered behaviours that I could use as storylines.

Casanova’s unusually intense youthful physicality made him a useful character. Children can identify with Casanova’s sense of being an outsider, in a bodily and emotional sense, till he was eight. This was manifested in his muteness, his outrageously prolific nosebleeds and the strange cure he underwent for them. In The Wishing Bones, I originally used the entire episode of the trip to Murano with his adoring grandmother, who put him in the hands of a witch who cured his muteness and his bleeding in a series of picturesque acts and visions. However, in the end, this part of my book was abbreviated and accessorised with other elements more appropriate to this age range, such as beating hearts in buckets and rude talking cats. (Casanova's own witch had black cats, but they were silent).

Casanova’s frank greed for particular foods makes him a suitable character for children’s book. Children are very interested in food. It is one of the few things in which they can exercise power, even if it is the power of 'NO!' And Casanova's totemic foods - his ‘Madeleine moments’ - are even character-aligned … the crab soup his abandoning mother craved when he was in the womb, for example.

I explained that I write for children in the specific genre of junior ‘histfantfic’, which allows for magic. Casanova dabbled for profit and pleasure in occult practices, notably with the elderly Marquise d'Urfé, the richest woman in France, whom he pretended to impregnate with her own cloned spirit. In so far as his memoirs are an act of self-creation, there are many metaphorical rabbits pulled out of many plumed hats. He even wrote his own magical-real novel, with science-fiction elements. So I think Casanova would have enjoyed histfantfic.

His love of novelty also made Casanova an ideal candidate to be the protagonist of a children’s novel. Most of my children’s books feature young, lovely and rather rude mermaids, who speak sea-salt slang because how else would they learn Humantongue except by eavesdropping on pirates? Casanova loved new faces - new ‘title pages’, as he styled them – so imagine Casanova with a cavern full of beautiful young women whose ‘treasure’ (as he would put it), is mysteriously situated – almost like that of the Bellino of his memoirs. Obsessively attracted to this young ‘castrato’ male singer, Casanova unmasked Bellino as a girl masquerading as a boy using an ingenious rubber device that rendered her a virtual hermaphrodite.

Moreover, the mermaids of The Wishing Bones are compelling, strong women who wear scallop shells on their breasts. How is Casanova not going to be fascinated by them? For me, it was a kind of chemistry experiment: put young Casanova with magical creatures possessing a powerful femininity – and see what bubbles up.

I was also able to make use of Casanova’s invention of himself as an extrovert, a larger-than-life person. People like that always mess up. In The Wishing Bones, Casanova’s innocent enthusiasm for the witch on Murano – the one who stopped his nosebleeds - leads him to betray his friends, almost fatally.

I was asked to keep Casanova rather polite in The Wishing Bones. My original draft included verbal hints of his burgeoning sexual awareness, but that did not survive into the final manuscript. Even though in real life he had already acquired sexual experience by the age I show him in the novel, that side of his life is not visible. Instead, I tried to show the abundance of his joys, his lively greed, his charm and his desire to please ladies. He is attracted to one of my young female protagonists, and she takes pleasure in his warmth. But there is no question of precocious sexual activity being allowed when writing for this age group.

Among my embellishments is Casanova pre-shadowing his work as a violinist. He is hired to entertain the English guests at their Venetian 'Hotel of What You Want’ with singing, violin-playing and heart-tugging recitals of romantic verse. The violin – restrung with mermaid hair – becomes young Casanova’s tool for repainting the colour in a city that has been drained of its beauty by the enactment of an ancient prophecy.

Of course he needs to stare deeply into the eyes of a lovely girl while he goes about this important work.

Will this site me in the sights of Me Too? I hope not.

P.S. Apologies to anyone who was planning to attend my Wishing Bones event at the Finchley Road O2 Waterstones on this coming Sunday August 4th. Almost appropriately, for a book set in Venice, this event has been delayed by a flood. It will be reconvened as soon as possible.

Can see this is going to be another richly rewarding novel - so glad the mermaids will appear again!

What does 'the unicorn in the room' mean? 'The 'elephant in the room' means the thing that everybody knows, but does not dare mention, and is somehow crowding out everything else.
A unicorn is a fictional horned animal, recently fashionable among small girls when covered in glitter and often coloured pink. Is that you Michelle? Fictional and glittery? Or mono-horned?

I enjoyed finding your post here, after returning from holiday. Interesting to read - especially as a copy of The Wishing Bones is also sitting on my desk.